It happened shortly after 10 a.m. at a construction site at Simcoe and Wellington streets downtown.

Helicopter footage showed the crumpled crane collapsed on top of an office building. Some of the upper windows of the building also appear to have been smashed.

While some reports from the scene indicated there may be injuries, Toronto Fire said that is not the case.

“The operator is not injured. She made her way down with the assistance of one of her colleagues and was down upon our arrival,” Fire Chief Mathew Pegg told reporters at the scene.

It’s not clear if anyone was inside the affected offices when the crane struck the building. That building and two adjacent buildings have now been evacuated as a precaution.

Pegg said firefighters’ main concern is public safety in the event of any further collapse.

“We just need to deal with the public safety hazard, given I am told the crane is just about 200 feet in the air,” Pegg said. “We need to secure that and make sure that it doesn’t end up with a subsequent incident.” 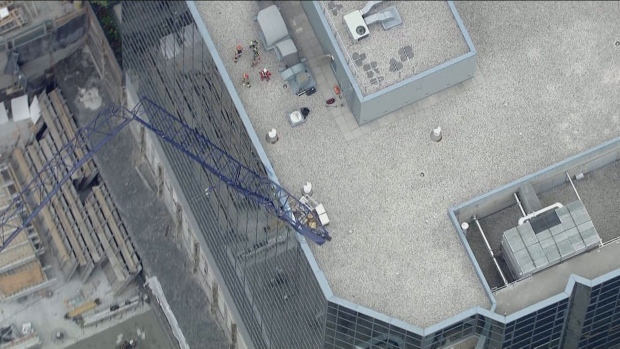 He said a collapse perimeter has been established around the crane in case there is further movement.

“Obviously we can’t control or prevent the movement or failure of the crane at this point. We are taking every precaution we can to make sure that it is secured,” Pegg said.

He said stormy weather conditions could complicate those efforts.

“We’re having to keep an eye on the weather. Fortunately it’s OK right now but we’re paying particular attention to weather moving through. We have to be very vigilant about things like heavy rain, wind and the potential for lightning, but so far so good.”

Pegg said Toronto Fire will remain at the scene until engineers come in to take over and see to the safe removal of the crane.

On Thursday night, Toronto Fire District Chief Stephan Powell said the dismantling of the crane has been halted due to inclement weather. It will resume on Friday morning.

Local roads around the site have been closed off as a precaution.

It’s not yet clear what caused the structure to fail.

The crane company and the Ministry of Labour are expected to investigate the collapse.