Several floors of a downtown Toronto hotel were flooded with water when a large pipe burst on one of the building's upper floors.

Fire crews were first called to the north tower of the Westin Harbour Castle hotel, located at the foot of Bay Street, at approximately 2:45 a.m. on Tuesday.

They were told that a large pipe had burst on the building's 35th floor, Toronto Fire Capt. Adrian Ratushniak told reporters.

The building engineer was able to shut the water off, but not before several centimetres of water filled the hallways and rooms of the nearby floors, Ratushniak said. Water seeped through elevator shafts, stairwells and ceilings down to the 12th floor.

Video captured by guests showed water gushing down the stairwells of the hotel’s north tower.

“I can just imagine the size of the pipe that burst out there because it was a lot of water,” said hotel guest Rene Boudreault. “You opened the door to the staircase and it was just nuts.”

Hundreds of residents were asleep and were woken up by the alarms that went off when the flooding started.

While some guests could see the water themselves, some were confused by the alarms because they couldn’t see the flooding.

Guests complained that it was taking them as much as 40 minutes to get out of the building because only one elevator was working. Service has since been restored on all of the building’s elevators.

Dozens of rooms have also been damaged by the flood water. Dripping water knocked down sections and tiles from the ceilings of some floors.

One guest told CTV Toronto's Janice Golding he'd seen water dripping down the window in his room. He went into the hallway and noticed the floor had been transformed into a "gully" filled with water.

None of the rooms in the hotel's south tower were damaged, and the hotel remains open and operational.

Starwood Hotels and Resorts told CTVNews.ca that hotel engineers were working to assess the damage and restore the pipe. Public Relations Manager Dan Young said hotel staff served guests a complimentary hot breakfast in the lobby of the hotel.

"We are sorry this happened as our whole business is about delivering a great guest experience. We know it's not how our guests planned to start their day and we thank them for their cooperation during this unexpected incident," Young said in a statement.

With a report from Janice Golding 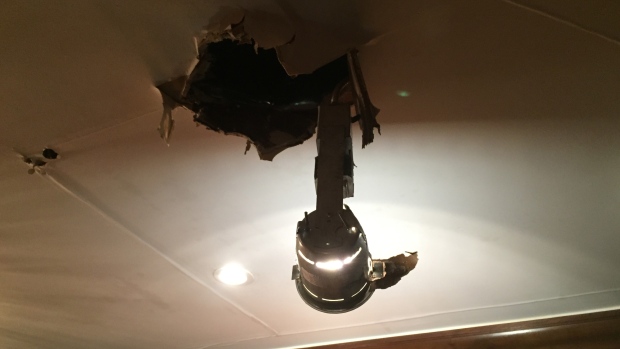 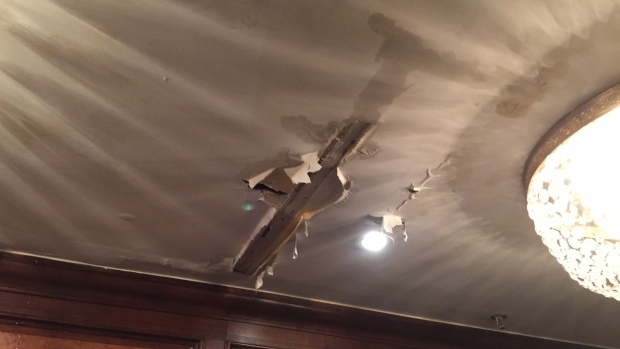