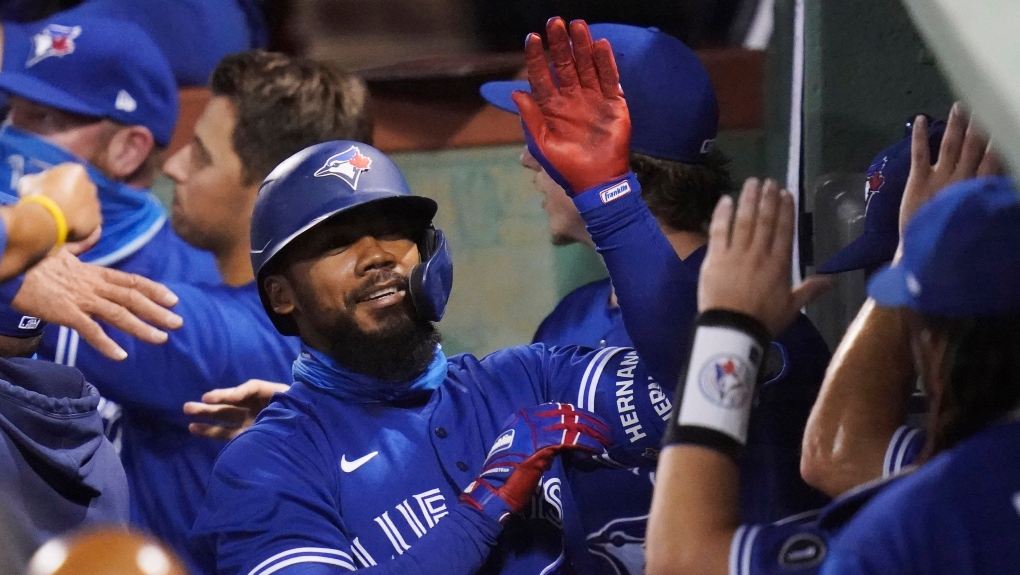 Toronto Blue Jays' Teoscar Hernandez is congratulated by teammates after his three-run home run, breaking a 2-2 tie, in 10th inning of a baseball game against the Boston Red Sox, Thursday Sept. 3, 2020, in Boston. THE CANADIAN PRESS/AP/Charles Krupa

TORONTO -- Teoscar Hernandez was enjoying a breakout season when he suffered an oblique strain earlier this month. The Toronto Blue Jays hope he'll pick up where he left off now that he's back in the lineup.

Manager Charlie Montoyo slotted him into the cleanup spot for the finale of a three-game series in New York against the Yankees on Thursday night. The right-fielder's return should provide a jolt for a team that wants to enter the final week of the regular season on a high ahead of a likely playoff appearance.

Hernandez had 14 homers and 27 RBIs in 39 games before going on the 10-day injured list. He said he hurt himself when he made a quick turn on the basepaths in a game in Boston on Sept. 5 and the problem worsened in his next at-bat.

"At the beginning, I was a little scared because I thought I was going to miss the rest of the season," Hernandez said Thursday on a pre-game video call with reporters. "But when we got the MRI (exam), it showed it wasn't that bad so it was going to be easier to come back.

"That's how it was and now I'm here. I'm back (in) the lineup and I'm going to do things to help the team."

Hernandez was activated Wednesday so that he could be available off the bench on an emergency basis if needed. He tested the oblique earlier that day by taking hard swings during a live batting practice session.

"It was fine, I'm ready to go and I don't feel anything," Hernandez said.

After winning or splitting nine series in a row, the Blue Jays had their streak end Wednesday night with a second straight blowout loss to New York.

Hernandez has seen noticeable statistical improvements in a variety of categories this season. He entered the series finale against the Yankees with a batting average of .308 (up from .230 last season), an OPS of .995 (up from .778) and a slugging percentage of .637 (up from .472).

"When he got hurt, he was one of the best hitters in baseball," Montoyo said. "It was tough timing to lose a guy like that who was on fire and doing so well. He means a lot to our lineup."

His defensive play has also improved in the outfield. At the plate, Hernandez is getting the barrel of the bat on the ball more often and his strikeout percentage has improved.

He's also hitting the ball hard, currently sitting fifth in the major leagues with an average exit velocity of 94 m.p.h.

Toronto has dropped to third place in the American League East but the team's chances of reaching the post-season remain high. Eight teams will make the cut in the AL under the expanded playoff structure for this COVID-19-shortened 60-game campaign.

The Blue Jays have a slim chance of catching the first-place Tampa Bay Rays, but a second-place finish could secure a seed as high as fourth. A third-place showing would mean a seventh or eighth seed and a tougher first-round matchup.

According to FanGraphs, Toronto entered play Thursday with a 96.9-per cent chance of reaching the post-season.

The Blue Jays will play a doubleheader in Philadelphia on Friday to kick off a four-game series. Another four-game set follows against the Yankees in Buffalo, N.Y., before the season closes with a three-game series next weekend against the Baltimore Orioles at Sahlen Field.

"When you're playing teams like the Yankees -- we've got them for five more games -- you do have to swing the bats to beat these guys," Montoyo said. "Having a guy like Teoscar is going to help our lineup for sure."

This report by The Canadian Press was first published Sept. 17, 2020.