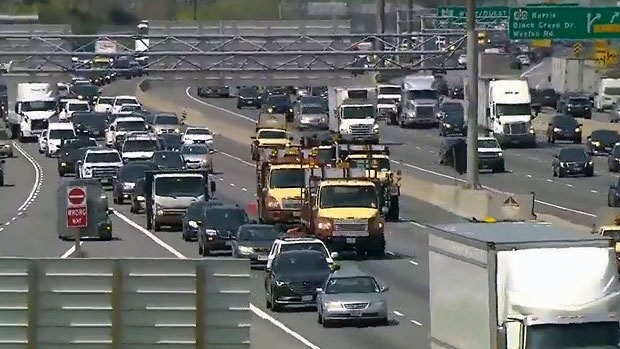 TORONTO -- The Toronto Region Board of Trade is calling for a vertical expansion of Highway 401 near Toronto Pearson International Airport to help alleviate gridlock it says is costing households an extra $125 per year in higher prices for everyday goods.

The business group suggests building lanes above or below the existing highway to add capacity and free up movement on a much-criticized choke point on the route through the Toronto-Waterloo corridor.

The idea is one of three released as part of a series of recommendations to improve the moving of goods on the key trade route.

The other two are encouraging off-peak deliveries to improve safety and save time and fuel, and regional co-ordination by a council with the mandate to address current and future "pain points."

In previous reports, the board has identified the economic importance of goods movement industries in the corridor, pinpointed bottlenecks, measured the impact of delays on consumers and businesses and proposed policy changes.

Board CEO Jan De Silva says the region must get its house in order to grow in the face of increased competition from the United States.

"The international companies who have chosen to locate their manufacturing operation in the corridor have a world of choice in where they deploy investment capital," she said.

"We must address the corridor's congestion challenge if we are to remain relevant."