October baseball is back in Toronto.

The Blue Jays are set to begin the MLB post-season against the Seattle Mariners in a best-of-three wild-card series at Rogers Centre this weekend.

Here are 10 things you need to know before the playoffs begin on Friday afternoon.

The 2022 wild-card format will look a little different than it has in the past. The league scrapped the one-game sudden-death format that had been in place since 2012 and replaced it with a best-of-three series in which all three games are played at the higher seed’s home ball park.

“It adds a layer of comfort. You are staying in your own bed, you have your own environment and clubhouse and people you are familiar with and you put that on top of a stadium full of Blue Jays fans it makes it very exciting,” Jays Manager John Schneider said of a potential home filed advantage during a press conference on Thursday. “I think the atmosphere in this building in the postseason speaks for itself. We are excited to be part of that.”

All-Star ace Alek Manoah will get the start for the Blue Jays on Friday in his first-ever post-season appearance. The 24-year-old is having a breakout sophomore season in the big leagues, posting a 2.24 ERA and a 16-7 record.

And he’s shown no signs of slowing down, having just been named the American League pitcher of the month for September.

Speaking with reporters at the Rogers Centre on Thursday, he said that he is trying to treat his MLB playoff debut as “just another game” but at the same time appreciates what is at stake. 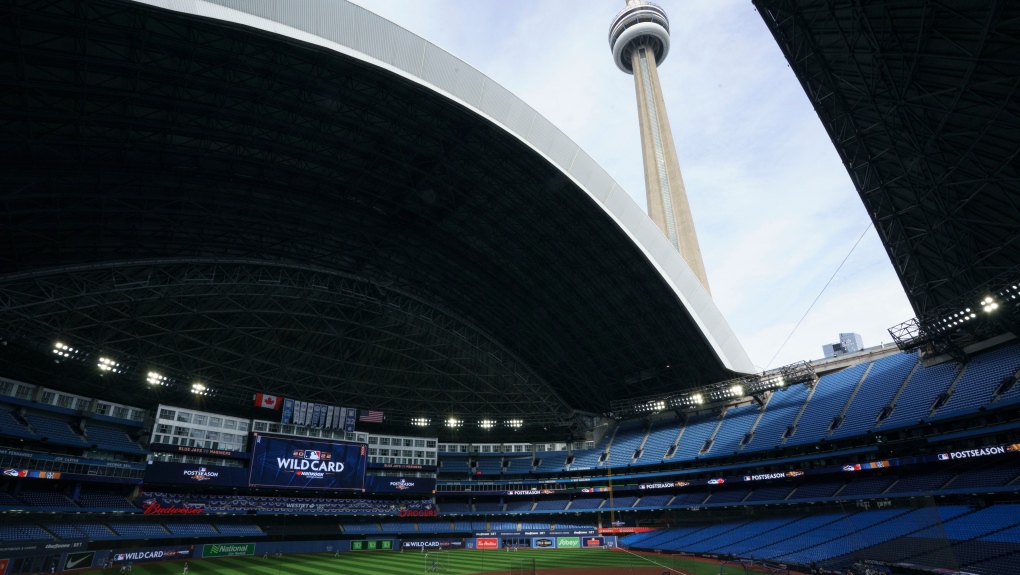 Rogers Centre is photographed during the Toronto Blue Jays' practice, ahead of the team's wildcard series matchup against the Seattle Mariners in Toronto, Thursday, Oct. 6, 2022. THE CANADIAN PRESS/Alex Lupul

“This is what it is all about. You train all off-season, you train all year, you go through the ups and downs and this is what it is all for, the bright lights, post season baseball,” he said. “This is what you dream of as a kid. So for me I am just go to go out there have some fun and play some baseball. I love playing with these guys, we like playing with each other and that is all we have to do, just go play baseball.”

Blue Jays fans who have been missing playoff baseball in Toronto might want to ask a Mariners fan how they feel. Seattle hasn’t qualified for the post-season in 21 years.

During the regular season, the Jays and Mariners played each other seven times. Toronto won the first two but the Mariners bested the Jays four straight times during a series in July.

Blue Jays Manager Charlie Montoy was fired following that series and replaced by Schneider on an interim basis.

“You can kind of take some things from it and leave some things from it,” Schneider said on Thursday when asked about the four-game sweep at the hands of the Mariners. “We are a totally different team than we were then and I think they are different too. Right now I think everyone is just singularly focused on the task at hand and not what happened earlier in the year and we feel good about where we are right now.”

The Jays haven’t officially announced who’ll get the start pitching in games two or three, but the likely order will be Kevin Gausman followed by Ross Stripling. Jose Berrios will be on the roster as well for insurance out of the bullpen.

The Jays’ late-inning arms will be led by closer Jordan Romano and will include Toronto’s only lefty, Tim Mayza, along with mid-season pick-up Anthony Bass.

As for position players, Jays fans can expect to see the usual suspects, including slugger Vladimir Guerrero Jr. and shortstop Bo Bichette.

The Mariners, who have a strong rotation of their own, announced Tuesday that righty Luis Castillo would start in Game 1, followed by former Blue Jay Robbie Ray in Game 2.

Ray won the AL Cy Young award with the Jays last season and Saturday will be his first start in Toronto since leaving the club to join the Mariners in the off-season.

The Mariners’ bullpen had the seventh-best relief ERA in the baseball this year, with veteran closer Paul Sewald leading the way.

Unsurprisingly, all three games are sold out on Ticketmaster as of Thursday.

Across the major leagues today

It’s a jam-packed weekend of baseball, as all four MLB wild-card series will be played on Friday, Saturday and Sunday (if necessary).

The other AL wild-card series between the Cleveland Guardians and the Tampa Bay Rays begins today at 12:07 p.m., officially kicking-off the post-season.

Over in the National League, the St Louis Cardinals face-off against the Philadelphia Phillies and the San Diego Padres visit the New York Mets.

Rain isn’t forecasted for Toronto this weekend and while Friday might bring some cloudy skies in the afternoon, Saturday and Sunday are looking sunny.

The forecast shows highs of 15 degrees on Friday and Sunday – 12 on Saturday.

If the Jays advance

The Jays would be wise to take advantage of the home-field-advantage they earned in the wild-card round, because they won’t have it if they advance to the ALDS.

The Jays’ second-round opponent would be the American League-leading Houston Astros, who have secured home-field advantage throughout the AL playoffs.

Can Toronto win the World Series?

With home-field-advantage, the Jays have a good chance of advancing past the Mariners, but vanquishing the Astros will be a tall task. If the Jays can pull-off the upset, they could end-up meeting their division rivals, the New York Yankees in the ALCS.

The Jays currently have a 2.9 per cent chance to win the World Series, according baseball reference.

Russia freed WNBA star Brittney Griner on Thursday in a dramatic high-level prisoner exchange, with the U.S. releasing notorious Russian arms dealer Viktor Bout, American and Russian officials said. The swap, at a time of heightened tensions over Ukraine, achieved a top goal for U.S. President Joe Biden, but carried a heavy price -- and left behind an American jailed for nearly four years in Russia.

The federal government appears to be on the verge of presenting new legislation aimed at strengthening Canada's early learning and child-care system. On Thursday at 11 a.m. ET, Minister of Families, Children and Social Development Karina Gould will be making what her office is calling a 'national announcement' on this topic.

Two organizers of the 'Freedom Convoy' won’t receive frozen donation funds to pay for their legal defence of a $300-million potential class-action lawsuit.

$1,048 meal: Torontonian has the most expensive Uber Eats order in Canada this year

A newly released report from Uber Eats shows that a Torontonian ordered the most expensive meal through the app in Canada this year, spending $1,048 at burger joint.