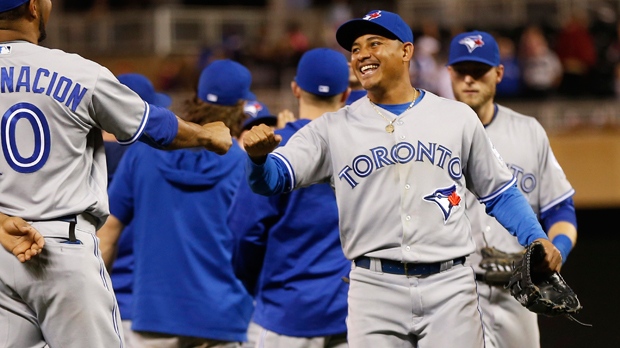 MINNEAPOLIS -- Jose Bautista hit a three-run home run to break open the game in the sixth inning and the Toronto Blue Jays slugged their way to a 9-3 victory over the Minnesota Twins on Friday night.

Robbie Grossman went 3 for 4 with a homer, a double and three RBIs in his first game for the Twins, who have lost five straight games and are an MLB-worst 10-31 this season. Tyler Duffey (1-3) gave up six runs on nine hits in 5 2-3 innings.

Blue Jays manager John Gibbons returned from a three-game suspension for his role in a brawl with the Texas Rangers and Troy Tulowitzki had a double among his two hits and an RBI.

A vocal contingent of blue-clad Jays fans dominated Target Field on a picture perfect evening, never getting louder than when Bautista sent a drive into the left field seats to cap Toronto's five-run sixth.

Saunders hit a solo shot in the seventh for his third hit of the game, continuing a torrid streak over the last 10 games.

Donaldson also had a double and two RBIs while hearing chants of "MVP! MVP!"

It was yet another miserable night for the Twins, who haven't gotten quality pitching in the starting rotation or the bullpen and have struggled mightily to score runs.

Manager Paul Molitor has been juggling the batting order in an effort to light a spark and gave second baseman Brian Dozier his first career night as a designated hitter. But Dozier went 0 for 4 and the Twins struck out eight times to go quietly yet again.

Miguel Sano had two hits, the only other Twins player to have multiple hits in the game.

The Blue Jays had a pair of web gems in the fourth inning. Center fielder Ezequiel Carrera sprinted in to make a diving catch on a looping flare from Sano and Saunders made a nifty sliding catch in left field to take a hit away from Jorge Polanco.

Blue Jays: 2B Devon Travis (shoulder) had three hits in his first rehab game with Triple-A Buffalo on Thursday.

Twins: Prized prospect Byron Buxton has not played for Triple-A Rochester since May 14 because of back spasms. GM Terry Ryan said he would be back in the lineup on Saturday.