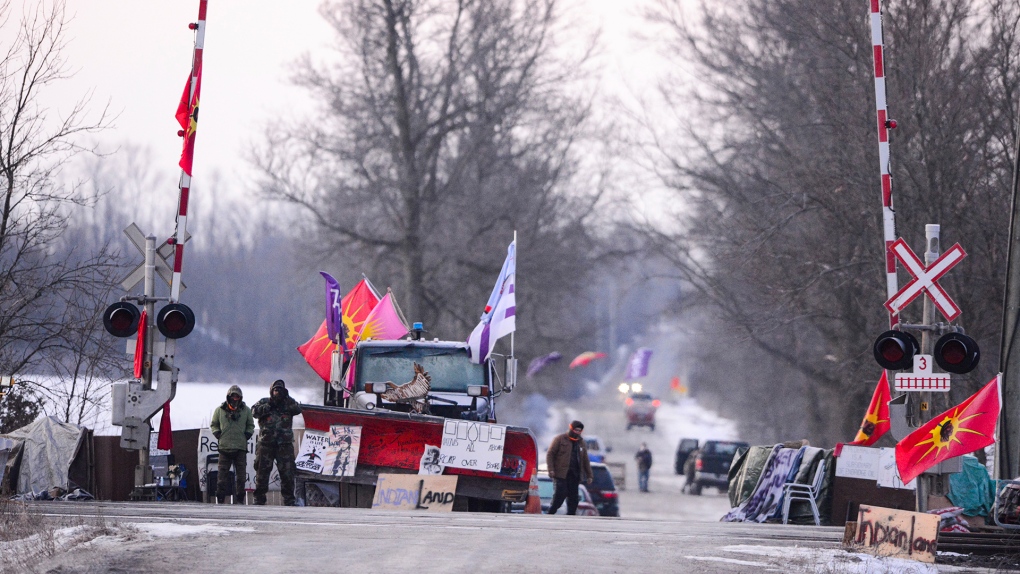 A protester looks through a pair of binoculars from the closed train tracks in Tyendinaga, near Belleville, Ont., on Sunday Feb.23, 2020. The rail blockade is in support of the Wet'suwet'en who oppose work on a pipeline in northern B.C. THE CANADIAN PRESS/Sean Kilpatrick

Hereditary chiefs from Wet'suwet'en First Nation are expected to return to British Columbia today after visiting Mohawk communities in eastern Canada, with no signs that blockades crippling the country's rail network will come down.

The actions are in solidarity with hereditary chiefs contesting a British Columbia natural gas pipeline and after two weeks, Prime Minister Justin Trudeau said on Friday that while his government is ready to talk, the blockades must come down.

The traditional chiefs visited supporters in Tyendinaga Mohawk Territory and Kahnawake, south of Montreal, this week, saying their conditions for talks remain the same.

Hereditary Chief Woos said they are ready to engage in nation-to-nation talks with the B.C. and federal government once the RCMP and Coastal GasLink leave their traditional territory and cease work on the natural gas pipeline project.

Woos, of Grizzly House, told reporters in Kahnawake on Saturday that attempts to reach out to Indigenous Services Minister Marc Miller have not been returned since Trudeau's call.

The blockades, particularly one on a critical east-west rail line near Belleville, Ont., are in support of those hereditary chiefs who oppose the project, despite support from elected band councils along the pipeline route in B.C.

Meanwhile, Via Rail service has said it is set to resume certain routes, including its Quebec City-Montreal-Ottawa route on Monday.