A block party at a Toronto community centre Saturday celebrated the city’s rich cultural diversity, and the stories and contributions of immigrants.

The multimedia program in Parkdale is one of four events planned by the Toronto Ward Museum, a non-profit which aims to preserve the history of immigration in the Toronto area by sharing oral histories.

Saturday’s event at Parkdale Activity Recreation Centre featured numerous installations and exhibits, and dozens of people gathered to celebrate their community at the block party.

“It’s the culmination of an eight-month long project where we interviewed a lot of storytellers, got stories about their migration [and] how they settled here,” Tenzin Norzin, a researcher with the event, said.

“We’re just putting it all together into an exhibition so that we can celebrate their stories with the rest of the neighbourhood.”

Over the last two weekends of October, 42 people will talk about their immigration experiences at four different block parties events. 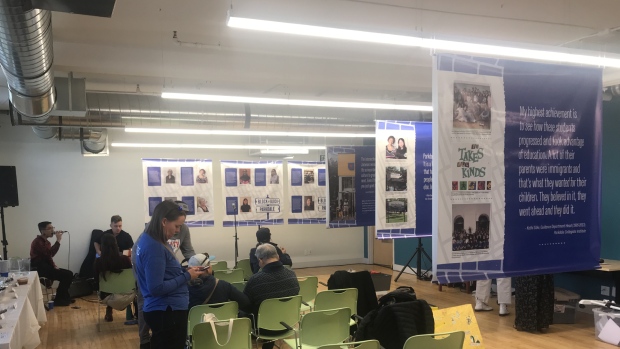 The other events are taking place in Agincourt, Regent Park and Victoria Park neighbourhoods — areas the museum says are undergoing “significant redevelopment.”

Recent immigrant Nash De Souza shared his story at the Parkdale event Saturday afternoon. He said he moved from India to Canada four years ago to be with his Canadian wife.

“It takes time, as a newcomer, to actually open up and to feel and to stop being self-conscious and stop judging yourself and to open up to the neighbourhood,” he said. “A lot of times you’re too afraid.”

Residents in Parkdale spent the start of their weekend sampling different cuisines, listening to their neighbours’ stories and sharing their own.

“I think it’s great to learn more about the people in the community,” resident Megan Franklin told CTV News Toronto.

“A bunch [of the people here] I’d been in their businesses before, or I’d seen them working in the library, but I didn’t know their backstories before, so it was really nice to learn more about them.”

The museum said it will continue to focus on the four neighbourhoods between 2019 and 2021.

This month's events are free to attend and open to the public.