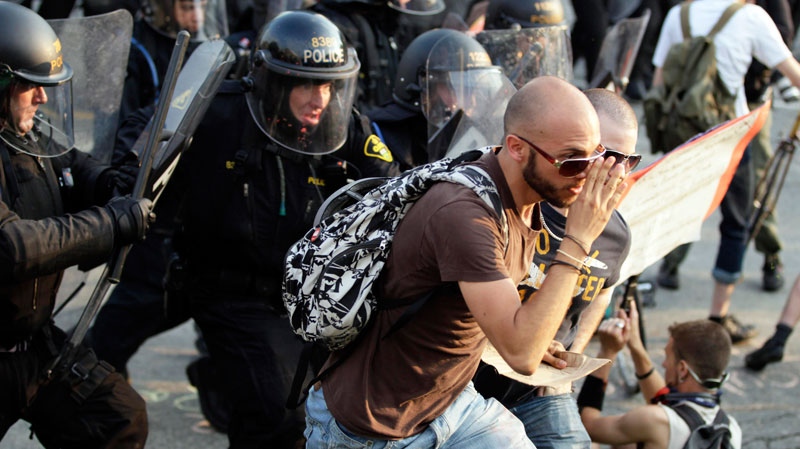 Toronto's chief of police is accusing Ontario's Special Investigation Unit of editorializing its decision not to charge six officers accused of impropriety during the G20 Summit.

Chief William Blair released a statement on Monday saying he was disappointed that the SIU would mix speculation with its announcement last week that it would not recommend criminal charges.

Six SIU investigations into complaints about police conduct during June's G20 Summit were dismissed last week after the oversight organization concluded that the officers involved could not be identified.

On Thursday, SIU director Ian Scott said there was reasonable grounds to believe excessive force was used in at least two of the cases.

"I am disappointed that the SIU changed, fundamentally, the way they normally carry out their job in this investigation," Blair said in a statement. "Their job is very straightforward. Their mandate is to determine whether or not there is evidence to lay criminal charges, not to engage in speculation and guesswork."

The investigations stem from complaints by six people that officers used excessive force to arrest them during the summit in downtown Toronto.

Charges were not laid in any of the cases because the SIU could not be certain who caused the injuries or whether excessive force was used.

In two cases, the SIU said it was reasonable to conclude excessive force was used, but they still could not recommend charges.

Brendan Latimer, 19, was reportedly struck in the face and arrested while laying on the ground after being trampled by protesters. The SIU said they could not identify the officer who injured Latimer because his eyes were closed at the time.

In the case of Adam Nobody, 27, who was injured near Queen's Park during the riots, the SIU said a video posted on YouTube corroborated the claim that police arrested him by using excessive force.

Blair said there was no way to know what was removed from the video, and that it may have shown why force was used when he was arrested.

"For the SIU to rely on a YouTube video as corroboration of an allegation against a police officer, a video that has clearly been tampered with, a video they appear not to have examined very closely, raises serious questions about the quality of their investigation," Blair said.

When questioned about Blair's comments about the edited video, SIU spokesman Frank Phillips said the director would be waiting for police to provide them with the missing parts of the video.

"In anticipation of receiving further material information from the Toronto Police Service, it would be inappropriate for Director Scott to comment on it at this time," Phillips said Monday.

Blair said the Toronto Police Service was ready to hold its members accountable for their actions, but accountability must be based on facts and evidence.

Blair said early this month that up to 90 officers would face disciplinary action for not wearing their name tags during the summit weekend.