TORONTO -- A 68-year-old Black man is seeking justice after he was struck several times on his head and left nearly unconscious by Durham police officers as he was attempting to leave an Ajax hospital with his wife.

The night of the incident on Oct. 30, 2018, Livingston Jeffers’ jacket was torn at the armpit and his face was swollen and bloodied as an officer told him “that’s what you get for fighting us.”

The Durham force eventually charged Jeffers for assaulting and attempting to disarm a police officer – charges that were later dropped in court when video evidence emerged and witnesses came forward saying that never happened.

Livingston Jeffers and his lawyers are now hoping that the Office of the Independent Police Review Director will review an investigation into the incident, and criminal charges will be laid against Const. Iyan Dusko and Const. Alex Edwards of the Durham Police Service.

The Kutty and Associates law firm is questioning the office’s recent investigation into the matter led by York Regional Police, alleging it failed to consider important medical records and did not speak to two independent witnesses who saw and video recorded the incident.

Lawyers Faisal Kutty and Kalim Khan held a news conference on Monday, where Jeffers’ grandson and the two witnesses were also present. The lawyers are making the incident public amid recent protests and discussions around anti-Black racism and police brutality in Canada and the U.S.

“We believe that as Canadians we are much better; that we don’t have racism. We have systemic racism here. We just do it with a different demeanour, a nicer demeanour and with a smile, that’s what we do. Then we cover it up,” Lawyer Faisal Kutty told reporters.

“These people [Jeffers] were in need of help. They should not have been treated like they were criminals.”

There is also a civil lawsuit against Durham police and Lakeridge Health Ajax Pickering Hospital regarding the incident.

The Durham Police Service released a statement Monday saying the officers were at the hospital for unrelated matter "when they were asked by hospital staff to intervene in a disturbance."

"The incident resulted in a public complaint filed with the Office of the Independent Police Review Director, who in turn asked for assistance from a different police service to investigate the complaint," the police service said.

"That investigation concluded that the allegations of wrongdoing raised by the complainants were unsubstantiated; however, the officers were deemed to have failed to read the complainant his charter rights upon arrest." 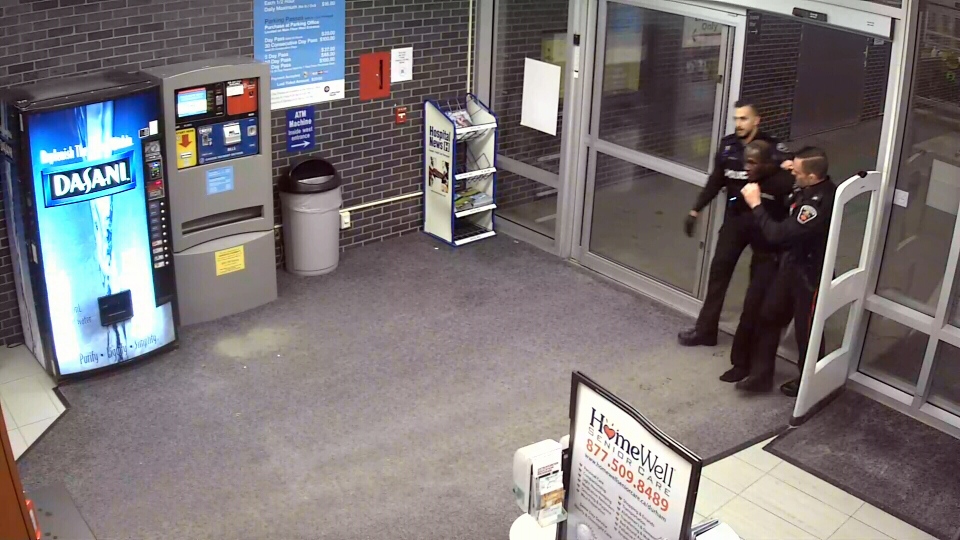 What happened the night of the alleged attack?

Livingston Jeffers and his wife Pamelia Jeffers were brought to Lakeridge Health Ajax Pickering hospital by their grandson. They came voluntarily as Pamelia complained of insomnia and stomach pain and wanted medical attention.

Jeffers’ lawyers say that after hours of waiting at the hospital, the couple felt restless and asked a passing doctor if they could go home. The doctor told them they could leave and come back the next day.

As they made their way towards the hospital exit, lawyers said that sometime between 10:45 p.m. and midnight, a nurse and security staff ran after them asking them to return, saying that Pamela had to remain in the hospital for a psychological assessment.

Confused and unwilling, the Jeffers argued outside the hospital and told the nurse and security staff that they were allowed to leave.

Officers Edwards and Dusko, who were responding to another call at the time, eventually turned their attention to Jeffers and the nurse, lawyers said.

In the police body-cam audio, which was partially transcribed in the York police investigation report, Livingston Jeffers can be heard asking police to “take it easy.”

“I didn’t do you all nothing. Please take it easy brother and keep off me,” Jeffers can he heard saying. “Brother, brother, we do not want to stay inside here.”

As Edwards repeatedly asked Jeffers to take a deep breath and began physically restraining him, Jeffers asked, “Brother, easy, what am I doing … listen brother…”

The police investigation report says that the “struggle” began at that moment.

Video camera evidence taken by the hospital’s security cameras and taken by witnesses shows Livingston Jeffers being held on the ground by officers. One is lying on top of him, while another appears to hit him.

The police report and documents say that Livingston Jeffers was struck on the head repeatedly until semi-unconscious. 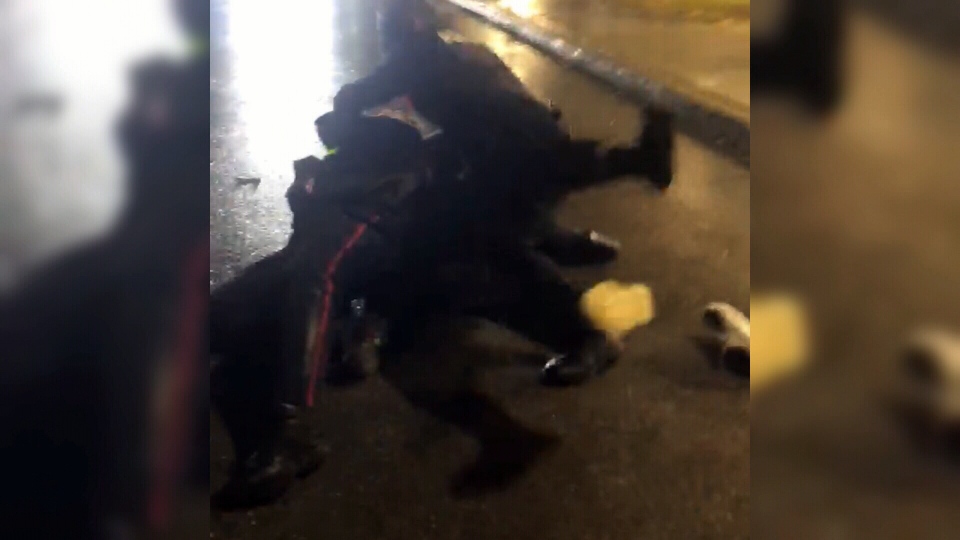 Edwards told investigators that Jeffers allegedly “rotated his right arm up, to strike or push” before he was toppled to the ground. Dusko reported that Edwards yelled that Jeffers was trying to pull out his gun.

Witnesses, who had been passing by, say that they began filming the incident with their phones and were shouting at the officers, begging them to stop.

“They [the police] threatened that they were going to charge us and told us that we shouldn’t be recording and that they have the right to do that,” witness Kaitlyn Wilson told reporters on Monday.

“They said he touched their gun, no they didn’t. He was getting beat up on the ground he had no time to react. It was terrible” 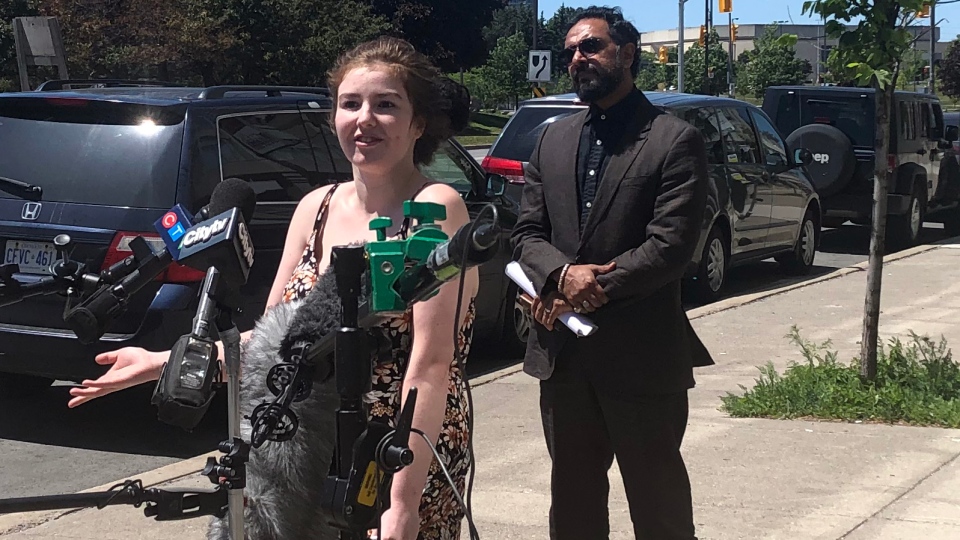 According to the Jeffers’ lawyers one witness managed to forward one of the videos before officers allegedly forced them to delete the footage.

The couple were then forcibly taken back to the hospital and restrained to a bed for the night. Livingstone Jeffers and Pamelia Jeffers were both released the next day after seeing a psychologist.

Livingston Jeffers filed a complaint against the officers in 2019 through the Office of the Independent Police Review Director for "alleged unlawful or unnecessary exercise of authority" and "discredible conduct."

York Regional Police recently investigated the incident and published a report on May 4. The police force said the officers responded reasonably and professionally.

The investigation found all allegations against the officers unsubstantiated except that Jeffers was not advised of his right to counsel.

Livingston Jeffers and his lawyers are now asking the Office of the Independent Police Review Director to review their York Regional Police-led investigative report.

“We are deeply disappointed with the findings and conclusions made in the report and wish to have the matter reviewed,” the lawyers said in a letter to the director’s office.

“With all due respect, this case suggests that elderly black people must weigh the dangers to their personal safety and exercise extra vigilance when attempting to leave a hospital unless they obtain written permission.”

“We assume you would agree with us that it would be odd to allow two police officers to nearly beat a 68-year-old man unconscious to ostensibly prevent him from harming himself.” 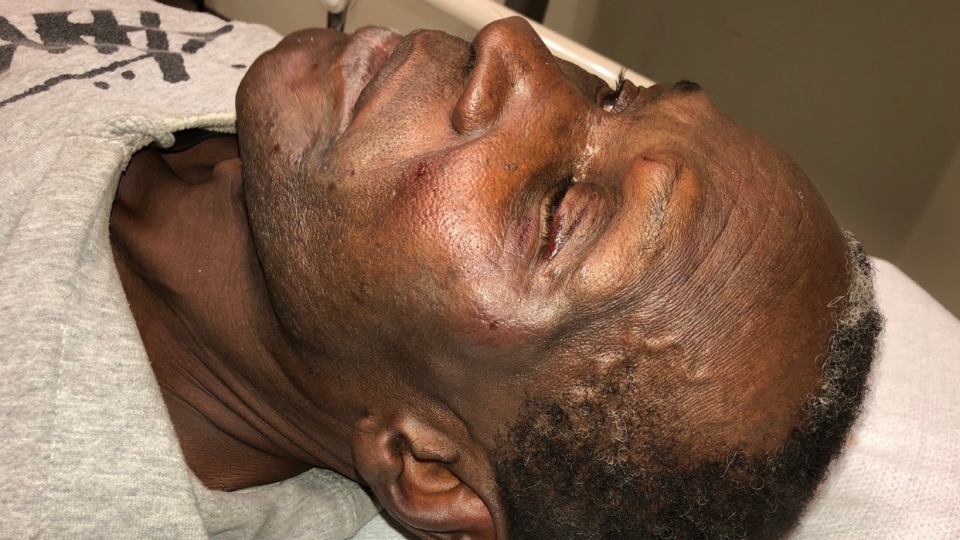 The Office of the Independent Police Review Director told CTV News Toronto that it cannot comment on the matter due to confidentiality provisions.

“Unfortunately, due to the confidentiality provision in the Police Services Act, we cannot confirm the receipt of a complaint or provide any related information,” the office said in a statement.

“The director believes that commenting on allegations of police misconduct in the media would compromise his ability to then investigate these allegations in a fair manner.”

The York police report says that Pamelia Jeffers was subject to a Form 1, which allows a doctor to hold a person in a facility for up to 72 hours in order for them to undergo a psychiatric assessment, but was leaving the hospital without approval.

“Members shall respond and investigate calls for service for a person in crisis, and if necessary take them into custody to be transported to an appropriate place for examination,” the police report read.

“It was PC Edwards and PC Dusko’s duty to assist [Pamelia]. To allow [Pamelia] to be taken by Mr. Jeffers would have been a neglect of duty and a danger to the Form 1 patient.”

But Livingston Jeffers’ lawyers say they have obtained medical documentation showing that a Form 1 and a Form 42 were never issued before Pamelia Jeffers left the hospital. For the latter form, a doctor is supposed to talk to the patient about their decision and explain why the patient must stay for the assessment.

“They were assaulted when they were leaving between 10:45 p.m. and midnight and then brought back to the hospital and a Form 1 was issued at 00:45 a.m. on October 31, 2018,” the lawyers wrote in a letter requesting a review of the investigation.

“The Form 1 notation on Mrs. Jeffers's medical records was entered at 00:45 a.m. on October 31st as a “late entry” (whatever that may mean) after the assault the night before.”

“It paints a clear but unfortunate picture: the security and police officers that ultimately detained Jeffers operated under the false belief that Mrs. Jeffers was, at the time, a Form 1 patient.”

Lawyer Faisal Kutty told reporters Monday that Livingstone Jeffers was also issued a Form 1 after the incident and that he was also never a patient of the hospital until he was forcibly admitted.

“Even if a Form 1 had been issued at the time, is this how we deal with someone leaving the hospital? Is this how you treat a person dealing with mental health issues?” Kutty said. “Mr. Jeffers was never a patient. The police made him one.”

Kutty said the investigation also did not look into why Livingston Jeffers had been charged initially and did not question if the level of force allegedly used against the couple was justified given that it was not a criminal matter.

The lawyers say the investigation failed to interview two key independent witnesses and did not look into allegations that police threatened and prevented witnesses from recording the incident.

“Given the recent media publicity around police use of excessive force and the important role played by mobile phone videos, we think you will appreciate the importance of being able to record such incidents,” the lawyers said.

“In fact, their videos may have been critical in having the charges against Mr. Jeffers dropped.” 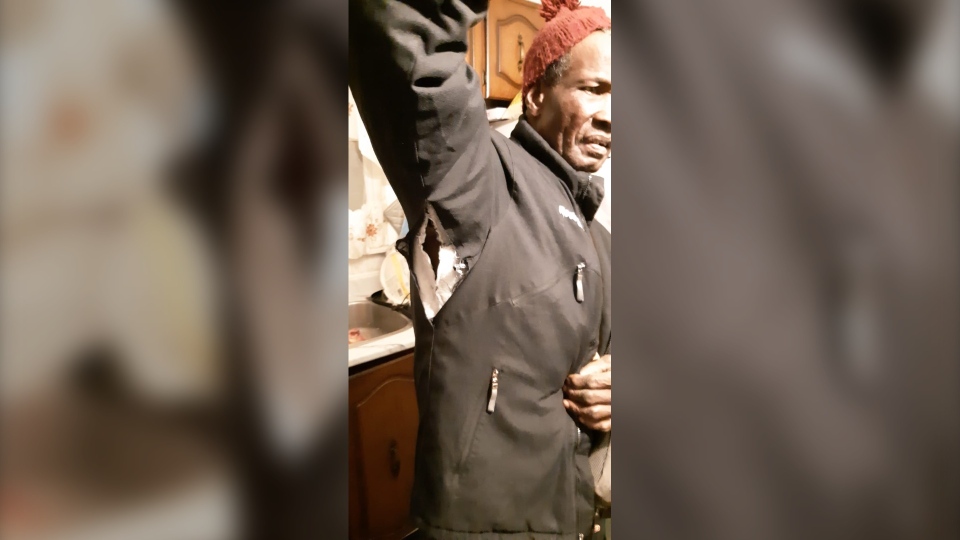 Lawyer Kalim Khan said that the lawsuit’s aim is to get recognition that something went wrong, and that the couple have endured severe emotional distress due to the incident.

“Myself, for 20 years, I have seen many cases of police brutality. I have never been able to take on a case … call it luck, call it an act of God, but everything converged together.”

The couple’s grandson Tre, who did not want to have his full name used, said that his grandfather is currently in need of medical support for blood clots in his leg, but he’s too afraid to visit the hospital.

“My grandparents are not doing well. They are scared to go to a hospital. They need care right now. He can barely walk because he’s scared to get treatment.” Tre told CTV News Toronto.

“My grandfather is sitting at home scared; he didn’t even want to come here today because of the police. They’re traumatised. It gets worse every day.”

"What we can say is that our team strives to provide excellent patient care to all members of our community, regardless of whether they access Lakeridge Health through the emergency department, an inpatient admission or one of our community locations," a spokesperson said.

"Lakeridge Health is committed to working with the communities we serve to promote a just and equitable environment for all members of our diverse community, including those who are most vulnerable."