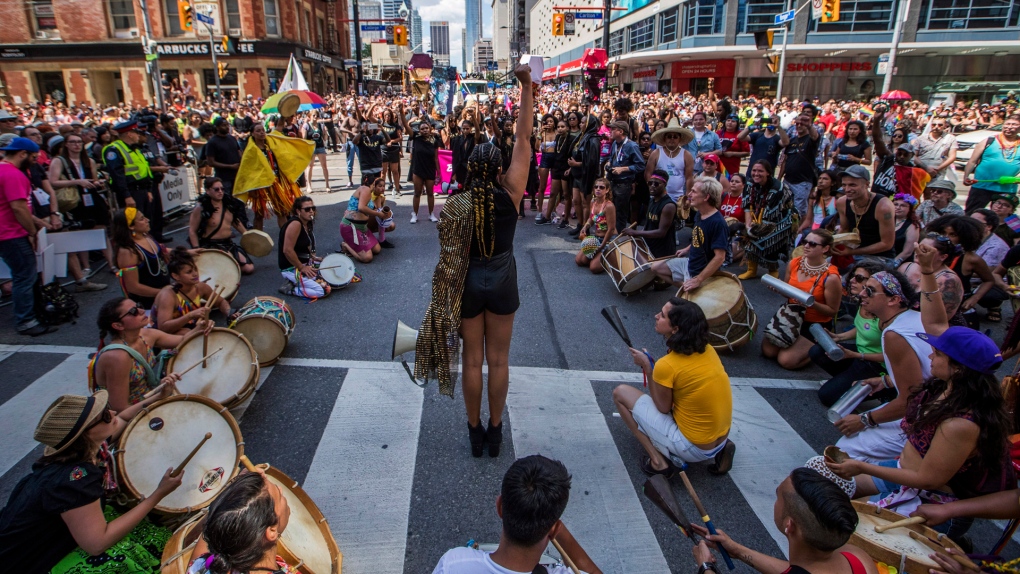 People from the Black Lives Matter sit on the ground to halt the annual Pride Parade in Toronto on July 3, 2016. (THE CANADIAN PRESS/Mark Blinch)

A sit-in protest staged by Black Lives Matter- Toronto at the Toronto Pride Parade is sparking controversy after the group presented a list of demands that includes barring police floats from future parades.

The group, which had been invited to participate in the parade, brought the event to a stand-still for several minutes with a sit-in near Yonge and College streets this afternoon.

The parade only resumed after Pride Toronto Executive Director Mathieu Chantelois signed a list of demands presented by the group.

In addition to demanding that police floats no longer be a part of the parade, the list included stipulations that Pride organizers commit to continued space, funding and logistical support for the group Black Queer Youth and that organizers make a commitment to more Black deaf and hearing ASL interpreters for the festival.

“Pride Toronto has shown little honour to Black queer/trans communities, and other marginalized communities,” the group said in a statement. “Over the years, Pride has threatened the existence of Black spaces at Pride that have existed for years.”

Chantelois was not available for interviews following the parade. However Pride co-chair Aaron Glynwilliams told CP24 that the protest is the start of a conversation about the issues raised.

“It’s something that we’re going to sit down with the Toronto police and have a discussion about,” Glynwilliams said. “I think that the police representation in the parade is an important topic of discussion.

“It is very important to many aspects of our community and that is an issue that Black Lives Matter has wanted to bring to the front. And we are committed to having that discussion with them and making sure that next year’s parade is one that is inclusive and safe and welcoming to everybody.”

Speaking with CP24, protest organizers said that the demands are geared toward making the parade feel more inclusive for marginalized groups.

“This isn’t about excluding police, this is actually about making our movement more inclusive,” Black Lives Matter organizer Janaya Khan said. “I think one of the major tensions of this particular day is ‘who feels safer with the presence of police?’ More than that, should they be in their uniforms and participating in the parade in the first place.”

Responding to the protest Sunday, Toronto Police Association President Mike McCormack called the demand that police no longer have a float “ridiculous” and “offensive” and warned that it could have serious negative consequences for the relationship between the police and the community.

“Unfortunately, it’s a great event and it’s been hijacked by Black Lives Matter,” McCormack said. “There’s no other way to describe it. This is not what this event is about. This about inclusiveness, it’s about community and now they’ve attempted to drive a wedge in that community.”

He said the police union will wait to see how Pride organizers respond to the demands by Black Lives Matter.

Toronto police have not commented on the protest or the demands so far.

Chief Mark Saunders marched in the parade Sunday along with throngs of uniformed police officers and other groups.