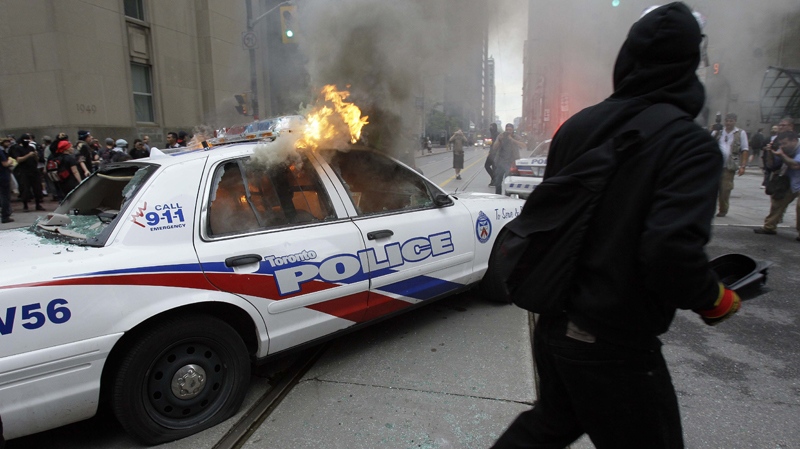 A group of anarchists using a protest tactic called "black bloc" is being widely blamed for the violence and destruction of the anti-G20 march that culminated with the burning of two police cruisers.

The strategy revolves around destroying symbols of capitalist wealth such as banks, while covered in black clothes that mask the wearer's identity, according to websites that support the method.

In Toronto, the black-clad group splintered off from the main crowd of peaceful protesters mid-route, attacking storefronts on Queen St. along with a handful of police and media vehicles.

As police regained control over the crowd early Saturday evening, many in the group ditched their black clothes and faded into the crowd.

The anarchists had warned ahead of the afternoon march they planned to confront the Integrated Security Unit and the security fence.

Toronto Mayor David Miller said Torontonians should be "very angry" about the rampage.

"That's not protesting, that's people who deliberately want to break windows, who want to burn cars," Miller told CTV News Channel. "That has nothing to do with the right to protest, it's simply crime."

Officers with the Integrated Security Unit managed to hold the rogue group away from the area where world leaders were expected to gather for a gala dinner to officially launch the summit.

But security experts say the ISU has been too slow to contain the riots.

"When we had them all together, that's when they should have been dealt with," security expert Alan Bell told CTV News Channel as the riots unfolded.

"I'm just surprised we've allowed things to go as far as we have."

The term "black bloc" doesn't refer to a specific group, and in fact, rioters using this tactic are notoriously hard to track.

The all-black uniforms are partly meant to protect wearers from being identified or prosecuted by police.

The tactic originated in Germany in the 1980s, where the term was applied to squatter youth, according to the anarchist website Infoshop.org. It drew international attention in 1999 during the protests against the World Trade Organization in Seattle.

There were several black blocs during the anti-G8 protests in Genoa, Italy, in 2001, including one organized by police agents provocateurs.