A significant winter storm is headed to Ontario that could dump up to 40 centimetres of snow in some regions and cause treacherous driving conditions.

According to Environment Canada, snow is forecast to arrive across southern Ontario on Sunday night and will "spread rapidly northeastward through the day Monday."

The weather agency says snow will fall heavily at times, with rates of a few centimetres per hour possible. Winds are also expected to gust up to 50 km/h Monday afternoon, causing poor visibility due to blowing snow.

"Travel will likely be difficult due to the expected heavy snow," Environment Canada said.

Regions like Niagara Falls, St. Catharines, Welland, Grimsby, Kingston, Ottawa, Peterborough, Brockville, Tweed, and Cornwall should be prepared for anywhere between 25 and 40 centimetres of snow. 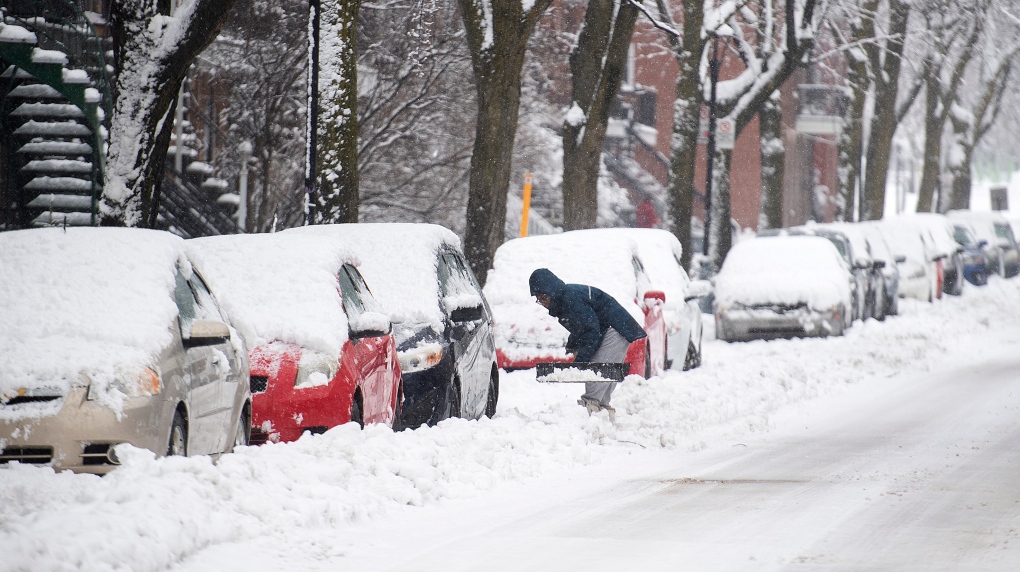 A person shovels snow from around a car during a snowstorm in Montreal, Saturday, January 16, 2021. THE CANADIAN PRESS/Graham Hughes

Residents in these regions are being urged to avoid travel if possible.

"There may be a significant impact on rush hour traffic in urban areas," Environment Canada said.

In Toronto, snowfall accumulations of 10 to 20 centimetres of snow are forecast Sunday night into Monday, however Environment Canada said "higher amounts can't be ruled out."

Extreme cold today #Toronto (feels like -30 with the wind chill right now) & a high of just -13C. Then brace yourself for a significant storm arriving late Sunday - early Monday. Track is still a bit uncertain but we could see significant snowfall/blowing snow, impacting travel pic.twitter.com/fiIkdSyEBh

Monday is the first day Ontario students are slated to return to in-person learning across Ontario.

Conditions are forecast to improve by Monday evening as the snow comes to an end.

Power outages caused by the powerful and deadly storm that swept across Ontario and Quebec on Saturday are stretching into another day, as hydro providers warned customers they could be waiting even longer for service to be fully restored.

200 bodies found in Mariupol as war rages in Ukraine's east

As government officials, corporate leaders and other elites at the World Economic Forum grapple with how to confront climate change and its devastating effects, a central question is emerging: to what extent can oil and gas companies be part of a transition to lower-carbon fuels?

Trudeau faces chants, pounding drums as he walks through crowd at Kamloops memorial

The prime minister made comments following a memorial gathering in Kamloops to mark one year since the Tk'emlups te Secwepemc Nation announced the remains of up to 215 children were detected at a former school site.

Beijing stepped up quarantine efforts to end its month-old COVID outbreak as fresh signs of frustration emerged in Shanghai, where some bemoaned unfair curbs with the city of 25 million preparing to lift a prolonged lockdown in just over a week.

Conservative party ends its investigation into complaint about a racist email

The Conservative Party of Canada says its ended its investigation into a racist email sent to leadership contender Patrick Brown's campaign team after the party member purportedly behind it resigned their membership.

An extensive study of thousands of COVID-19 patients in Ontario hospitals found links between the severity of their infections and the levels of common air pollutants they experience.