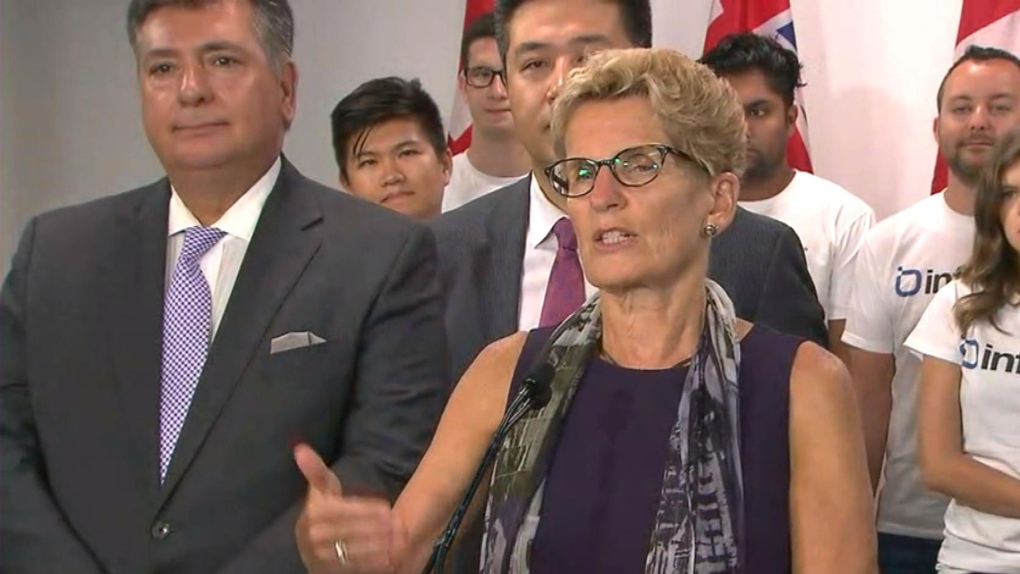 TORONTO -- First quarter results for 2016 show the Ontario economy growing at an annualized rate of three per cent, the highest in Canada and all G7 countries.

"I'm very pleased that Ontario's economy posted strong growth in the first quarter, stronger growth than we had expected in our budget, and that's a very important signal that Ontario is on the right track," Wynne said Monday.

"I just think that we need to let that sink in, that Ontario is growing at a faster rate than Canada, the United States and all other G7 countries," she said.

"And it was widespread. It wasn't just focused in one sector."

Wynne also said the Liberal government is confident the growing economy will allow it to eliminate a $5.7-billion deficit in fiscal 2017-18, as promised.

"We've beaten our targets year over year, and we're on track to eliminate our deficit next year," she said.

However, the New Democrats said the Ontario economy wasn't quite as rosy a picture as the Liberals are painting, and warned the government plans to eliminate the deficit by slashing health-care services.

"Their promise is to balance the books by overcrowding our hospitals, firing thousands of health-care workers, and creating a $3-billion backlog in critical repairs to hospitals," said NDP finance critic Catherine Fife.

"The story behind their numbers shows that ... the number of people working in temporary jobs, without benefits or even sick days, has increased more than twelve times faster than people with stable, permanent jobs."

Ontario's economy will remain one of the fastest growing in Canada over the next two years, and that will mean more jobs right across the province, said Wynne.

"Our unemployment rate in Ontario has been below the national average for more than a year, and in June it fell to 6.4 per cent, and that's the lowest since September 2008," she said.

"And these job gains are not confined to the Greater Toronto-Hamilton Area."

Finance Minister Charles Sousa said Ontario doesn't want to compete with low-wage jurisdictions that lured away many of the manufacturing jobs that used to form the basis of the province's economy.

"Ontario has become a top destination for foreign direct investments many years running," he said. "It's not by accident ... it's because we are replacing traditional manufacturing with other forms of manufacturing, agri-food processing, etc."

Wynne said she was very encouraged by the momentum of Ontario's growth, especially with so many uncertainties in the global economy.

"I don't want to leave the impression that I think that Ontario's operating in a vacuum and somehow we've figured out something nobody else has figured out," she said. "I just want to provide some context: we're in a good position in this globally uncertain environment."