A lunar eclipse is upon us and people in Ontario are uniquely positioned to see what’s known as a "super flower blood moon."

Yes, the event will be as cool as it sounds, and CTV News Toronto spoke with Jesse Rogerson, Ph.D, astrophysicist and assistant professor at York University, and Rachel Ward-Maxwell, Ph.D., Researcher-Programmer, Astronomy & Space Sciences at the Ontario Science Centre for what to expect, and the best place to catch the natural phenomenon.

WHY IS IT CALLED 'SUPER FLOWER BLOOD MOON ECLIPSE'?

“OK. So it’s three different things and all three of them are interesting reflections of humanity,” Rogerson explained. 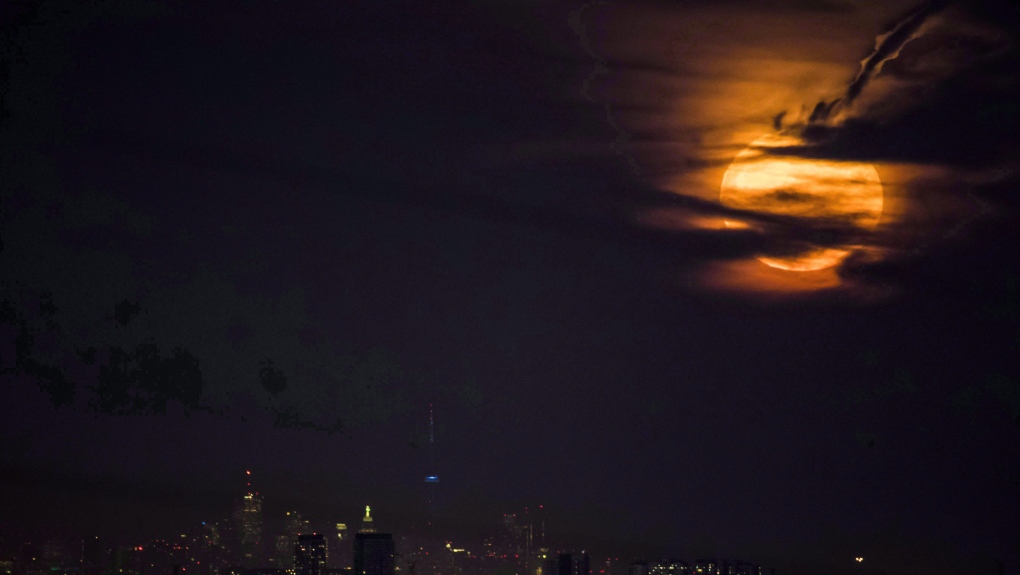 WHEN CAN YOU SEE THE 'SUPER FLOWER BLOOD MOON ECLIPSE'?

While the lunar eclipse will last several hours on Sunday, there are a few times you should be aware of, Ward-Maxwell said.

• Download our app to get local alerts to your device

• Get the latest local updates right to your inbox

THERE’S RAIN IN THE FORECAST FOR SUNDAY OVER MOST OF SOUTHERN ONTARIO. WILL THAT MAKE A DIFFERENCE ON HOW VISIBLE THIS ECLIPSE IS?

Weather, according to Rogerson, will be the “biggest competition” in actually viewing the event this weekend.

“As soon as you get any kind of major overcast -- you’re done. You can’t see it at all,” he said. “A little bit of wispy clouds -- you know how you go out and you can see the full moon even if there’s a little bit of clouds, you kind of still see it -- that’s OK. But if it’s a full overcast on Sunday, and you normally wouldn’t be able to see the moon, then you won’t see the moon that night either.”

“We’re sort of at the mercy of the clouds, so to speak,” he said.

DO YOU NEED ANY SPECIAL TECHNOLOGY OR EQUIPMENT TO SEE IT?

Unlike a solar eclipse, where you need protective lenses to view the sun safely, you don’t need anything more than your own eyes to witness the rare event, Ward-Maxwell said.

“Because we’re going to be looking at the moon, it’s completely safe. You don’t need any type of equipment or safety precautions. Just head outside, find an unobstructed view of the moon, and you’ll be able to see it just with the naked eye,” she said.

IF I MISS THIS SUPER BLOOD MOON, WHEN CAN I EXPECT TO CATCH THE NEXT ONE?

“It’ll definitely happen again in our lifetime, but it’s not going to happen any time soon,” Rogerson said.

If you can’t stay up to watch the event in full, Rogerson said you probably will get another chance to witness the phenomenon -- in five or six years from now.

WHERE WOULD BE THE BEST PLACE TO WATCH THE SPECTACLE?

“Literally everywhere in Ontario is the best place to view this,” Rogerson said. “The moon is so visible, the moon is such an easy thing to see, you don’t need a super-dark sky. You could be in the middle of downtown Toronto and as long as you can see the moon -- you’re going to be able to see it.”

“Light pollution isn’t an issue, you just need a clear view of the sky … You could literally step outside wherever you live. The last one I watched, I stepped out on to my front porch and I was like ‘oh, there it is. There’s the moon right there and I can see it occurring.’ Because the moon is so bright, it’s not that restrictive.”

If you want to tack on a mini-road trip to your viewing party, Ward-Maxwell suggests that you can travel to an area of the province where clear skies are expected Sunday, such as northern Ontario.

British Prime Minister Boris Johnson resigned Thursday, acknowledging that it was 'clearly the will' of his party that he should go. He stepped down immediately as leader of his Conservative Party but plans to remain as prime minister while the leadership contest is held.

Canada will keep ArriveCan for its data on COVID-19-positive travellers: sources

A staggering 71 million more people around the world are experiencing poverty as a result of soaring food and energy prices that climbed in the weeks following Russia's invasion of Ukraine, the United Nations Development Program said in a report Thursday.