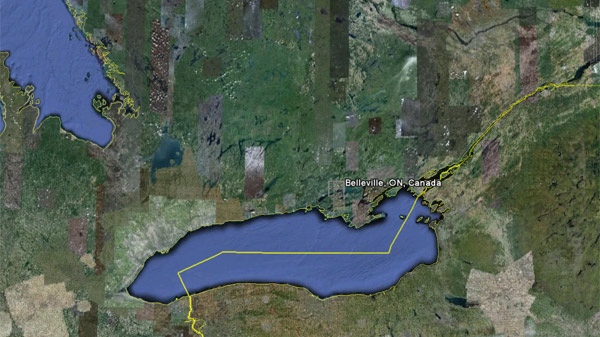 The location of Belleville, Ont. is seen in this image courtesy Google Earth. Belleville is approximately 270 south of Ottawa.

BELLEVILLE, Ont. - The mayor of Belleville hopes he has put an end to the rumours.

Neil Ellis went on air yesterday to say he was "absolutely not" having an affair with the city's police chief, Cory McMullan.

McMullan was recently in the news saying she was a victim of violence and her 53-year-old husband, David McMullan, has been charged with assault.

Ellis told listeners he was in the chief's car on August 6th just before the alleged assault and they were talking about city business.

The mayor says he was confronted by David McMullan who accused him of spending the night with his wife.

Ellis said he walked away from McMullan after a brief altercation and the McMullans then drove off.

In his broadcast, Ellis acknowledged the gossip spurred him to come forward.

Cory McMullan has declined to confirm or deny the rumours.