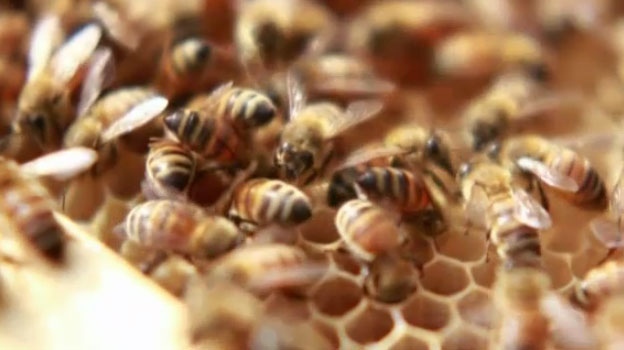 Experts say there aren't enough bees in our ecosystem -- a problem the Hamilton Port Authority is trying to solve. The organization has partnered with Humble Bee, a Hamilton-based urban beekeeping company, to install a bee yard on the city's waterfront.

Twelve boxes will be installed on the land, each of them separated into three miniature hives that will each carry about 500 bees. The project's goal is to provide food and shelter for pollinator bees in the area, which will in turn provide a breeding ground for local honeybees.

"The port lands ... offer ideal conditions for honeybee breeding, and the establishment of new 'queendoms', as we've been calling them," said Sharon Clark, the Hamilton Port Authority's Community Relations Manager, in a statement.

Additionally, because the area is isolated from other hives, beekeepers will be better able to track and control the genetics of both the queen bees and the drones they mate with.

Beekeeper Dan Douma of Humble Bee said the major losses in the bee population are largely due to chronic exposure to insecticide. The most commonly used farming pesticides, neonicotinoids, often affect much more than the intended area, he said.

"It's not a spray, like most people think about when they think about pesticide," Douma said. "It's a systemic, so it's actually coating the seeds before they are planted."

Pesticides of this kind are so commonly used that they can even be found in some of the flowers homeowners plant specifically to attract bees. Douma said he would encourage people to ask about pesticides before purchasing outdoor plants.

Neonicotinoids contain a neurotoxin that attacks bees' neural functions, making it hard for them to adapt to changing conditions like cold weather. Douma believes that's what causes so many winter losses in the bee population.

That poses a significant problem, because he says pollination by honeybees is a crucial part of food production.

When it comes to pollinating large crops, "the honeybee is the only pollinator that's up the task," Douma said. Bumblebees, for instance, "simply don't have the workforce to pollinate 100 acres of apple trees that are in full bloom all at once," he said.

"You need honeybees to do that kind of work."

The port land project will accelerate the breeding process, adding more honeybees to the ecosystem. It will also allow beekeepers in other parts of Ontario, and elsewhere in the country, to "get good local queen stock for their own beekeeping operations," said beekeeper Luc Peters, the other half of Humble Bee.

Both Douma and Peters said they would encourage people who are afraid of bees to reconsider.

"Honeybees often get a bad reputation because they get confused with yellow-jacket wasps," Douma says. But he explains that honeybees "get all their nectar from flowers that they turn into honey. They really have no interest in anything other than flowers."

He says it's very rare for honeybees to sting people, and they only do it if they feel threatened.

"Bees are really gentle," he says. "The last thing they ever want to do is sting someone."