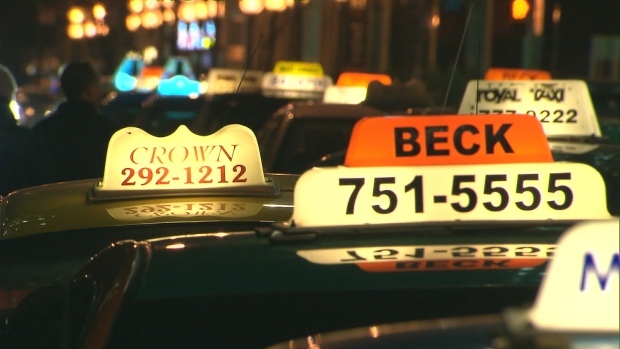 A Beck taxi in shown in this undated photo.

Toronto's largest taxi brokerage is suing the city for $50,000 for allegedly allowing thousands of untrained and inadequately trained commercial drivers to “fill our streets.”

On Wednesday, Beck Taxi filed a claim at the Ontario Superior Court of Justice against the City of Toronto for reportedly failing to fulfill its mandate to “create and implement regulations that protect public safety” by not requiring vehicle-for-hire drivers to undergo mandatory accredited training.

The taxi company is claiming that the city’s existing programs, which at this point include an online-only course that can be completed in less than an hour, do not take into account the safety of all road users.

Among other things, Beck Taxi wants a mandatory injunction that would compel the City of Toronto to enforce its own accredited training bylaw for commercial drivers. They also want the licences of inadequately and untrained drivers revoked.

The City of Toronto, in an email to CP24.com, said it has not been served with the court application from Beck Taxi, and “cannot comment on matters that are before the courts.”

Prior to 2016, vehicle-for-hire drivers in Toronto were required to undergo extensive and ongoing training, which included safe driving, the Human Rights Code, the Accessibility for Ontarians with Disabilities Act (AODA), geography, driver safety, and customer service.

Those training requirements were, however, eliminated in 2016.

“The consequences were predictably quick and deadly,” the taxicab company said in a release.

However by October 2021, city staff had yet to set up an officially recognized program for this course.

Beck Taxi’s lawyer, Eric Gillespie, said this resulted in a public outcry as the city continued to issue and renew licences to “thousands of vehicle-for-hire drivers,” despite its own bylaw.

“The RFP omitted most of the 2019 Public Safety and Training Measures from the requirement,” Beck Taxi said in its claim, which noted that the in-car and in-class components of the course were not longer required.

In April 2022, the city began accrediting training programs, but it was only required for new drivers.

Toronto’s roughly 50,000 existing drivers were not required to complete training as a condition of renewing their licences until last month, the taxicab company noted.

Two months later, the city reinstituted basic driver training with six accredited providers, however Beck Taxi says issues persist as there are no provisions to identify whether the test-taker is the same person seeking the licence, adding that tests contain questions that can be repeated indefinitely until they are answered correctly, which also allows participants to capture and share materials and questions.

The taxi company also said despite its many requests, the program still does not include or require an in-car or defensive driving component.

“Beck has been deeply concerned that the public interest has not been served and public safety has been put at risk by the actions of the City,” Beck Taxi said.

“Consequently, Beck had worked with Centennial College to design and implement a driver training program that included the foregoing primary training requirements in order to ensure that public safety was protected - an effort that was ignored by the City.”

A gay man is taking the federal government to court, challenging the constitutionality of a policy restricting sexually active gay and bisexual men from donating to sperm banks in Canada, CTV News has learned.

Canadian Actor Ryan Reynolds dropped by a Toronto college on Wednesday, surprising students in the midst of a school project.