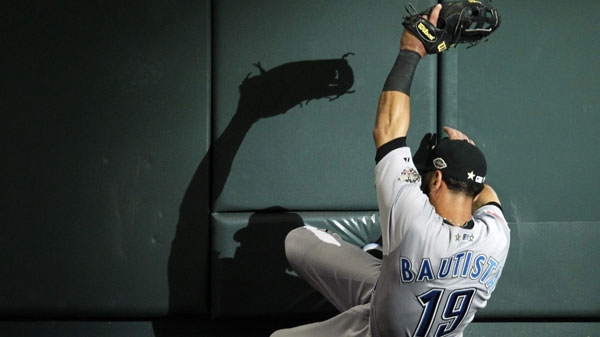 American League's Jose Bautista of the Toronto Blue Jays slides into a wall after catching a foul ball by National League's Brian McCann of the Atlanta Braves during the second inning of the MLB All-Star baseball game Tuesday, July 12, 2011, in Phoenix. (AP Photo/Ross D. Franklin)

PHOENIX - Jose Bautista is a huge part of the Toronto Blue Jays, so when he went sliding into the wall to make a spectacular catch of a foul ball in the all-star game on Tuesday night, his manager John Farrell was understandably concerned -- but not at all surprised.

"A sigh of relief as he got up and threw the ball back in," said Farrell, who was part of AL manager Ron Washington's staff. "But as we've seen from Jose, he's all-out all the time, regardless of the setting or the game."

Bautista raced to his right and slid into the wall as he caught Brian McCann's foul ball to start the second inning.

"He certainly represented himself well and the Blue Jays well on that play,"' Farrell said. "It was an all-out, hustle play."

Another hustle play didn't turn out so well. After Adrian Gonzalez's third-inning home run put the AL up 1-0, Bautista singled to shallow centre. Josh Hamilton followed with a single and Bautista advanced to second.

Then when Adrian Beltre singled to left-centre, Bautista tried to score from second but was out easily on a throw from Hunter Pence to end what had the makings of a big inning. The American League ended up losing 5-1 to the National League.

"Certainly he's not going to be held up, he's going to force the issue," Farrell said. "Pence made a heck of a throw, threw a strike, but much like we've seen all year, he (Bautista) played tonight like it was a regular-season game, and certainly there was something to play for tonight."