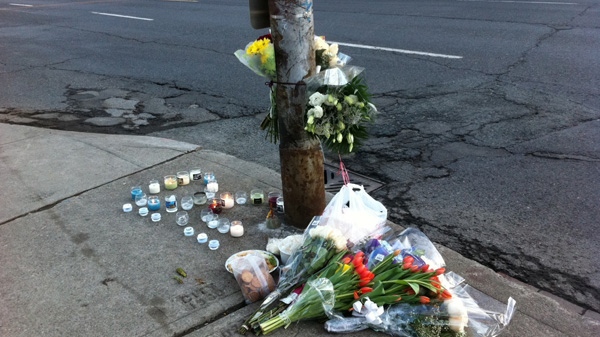 Flowers and notes make up a memorial at the scene of a fatal crash on Mount Pleasant Road in Toronto on Wednesday, April 4, 2012.

Oliver Karafa, accused of impaired driving in an incident that killed a 24-year-old man, had his request for bail granted on Thursday.

His bail was set at $20,000 and he has been released into the custody of his family.

Karafa, 19, faces a variety of charges, including criminal negligence, impaired driving and dangerous driving after a Range Rover smashed into a pole on Mount Pleasant Road early Tuesday morning.

The Range Rover was ripped in two upon hitting the pole, and police said it was likely travelling at speeds of 150 km/h.

David Chiang, the 24-year-old passenger in the vehicle, was killed instantly. Chiang was a personal trainer who had trained the driver at Extreme Fitness.

According to the terms of his bail, Karafa must stay in Ontario, surrender any passports and notify police of any address change.

He is also under house arrest unless he is with one of his family members, and he can only leave his home between 6 a.m. and 10 p.m.

He cannot apply for travel documents, consume or buy alcohol, enter a bar or establishment that serves alcohol and he can't be in the front seat of any motor vehicle.

Karafa's request for bail was originally denied Wednesday and a judge requested he return to court Thursday.

Karafa's lawyer, Lawrence Ben-Eliezer, said his client is relieved to be out on bail.

"He's obviously relieved to be released, to regain his liberty, under conditions, and he now is reunited with his family, which is obviously very supportive of him," Ben-Eliezer said.

The next court date for the case is May 1 next court appearance, but Karafa's lawyer will likely appear on behalf of his client.