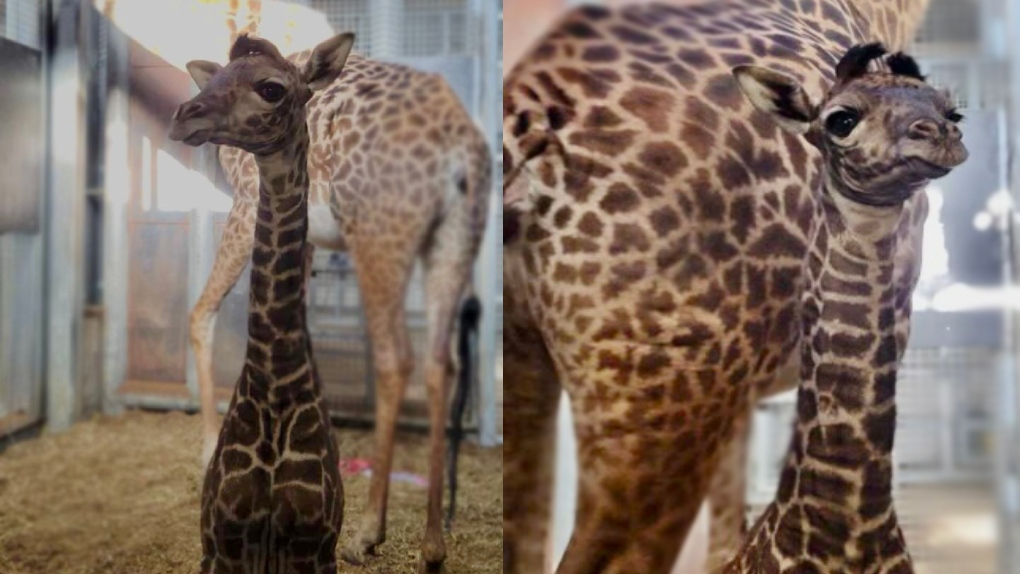 An endangered Masai giraffe has been born at the Toronto Zoo. (Twitter/@TheTorontoZoo)

The Toronto Zoo announced the birth of an endangered Masai giraffe Friday.

The baby giraffe was born at 9 a.m. on Thursday, stood up for the first time within an hour and a half of birth and is in healthy shape, the zoo says.

The mother of the giraffe, who carried the baby for 16 months, is also healthy.

The baby does not yet have a name, and the gender remains unknown. The zoo said its Giraffe House will remain closed to the public, but that an announcement will be made when he or she is "ready to make their public debut."

Masai giraffes were marked as endangered in December 2018 due to illegal hunting and habitat loss in the wild. Masai giraffes are found in the southern half of Kenya and Tanzania

Fewer than 35,000 Masai giraffes survive in the wild today, having experienced more than a 50 per cent decline in the past 30 years.

The new calf is the second baby of giraffe mother Mstari and father Kiko. Their first child, Amani, is now 22 months old, the zoo said in a news release on Friday.

“We have watched Mstari become an amazing mother to her first calf, Amani, over the last two years and we are thrilled to welcome a second calf to our growing Masai giraffe family,” Toronto Zoo CEO Dolf DeJong said.

“This birth is an important contribution to a genetically healthy Masai giraffe population, which is under increasing pressure in the wild due to habitat loss and illegal hunting.”

Mstari gave birth to a healthy Masai giraffe calf at 9:00am on Thursday, February 24! Both mom and calf are doing well.