Toronto store shelves are starting to empty as a formula shortage in the U.S. appears to be affecting retail here in Canada.

Meanwhile, parents have been watching, and they're stacking up.

"We actually just grabbed some extra just yesterday," says Neva Daya, who is shopping with her 11-month-old daughter, Alivia.

Daya says that when shopping for formula, they have to look around.

"The shelves are pretty bare," she says. “You have to go to a couple stores but we were lucky amazon had some too so we stocked up there."

At one local Shoppers Drug Mart in the city, small gaps are visible where products were once stocked – also at a local No Frills store.

A nearby WalMart has an entire row missing. There is a note taped to one of the shelves saying a voluntary recall of the product Similac last February is contributing to the shortage. 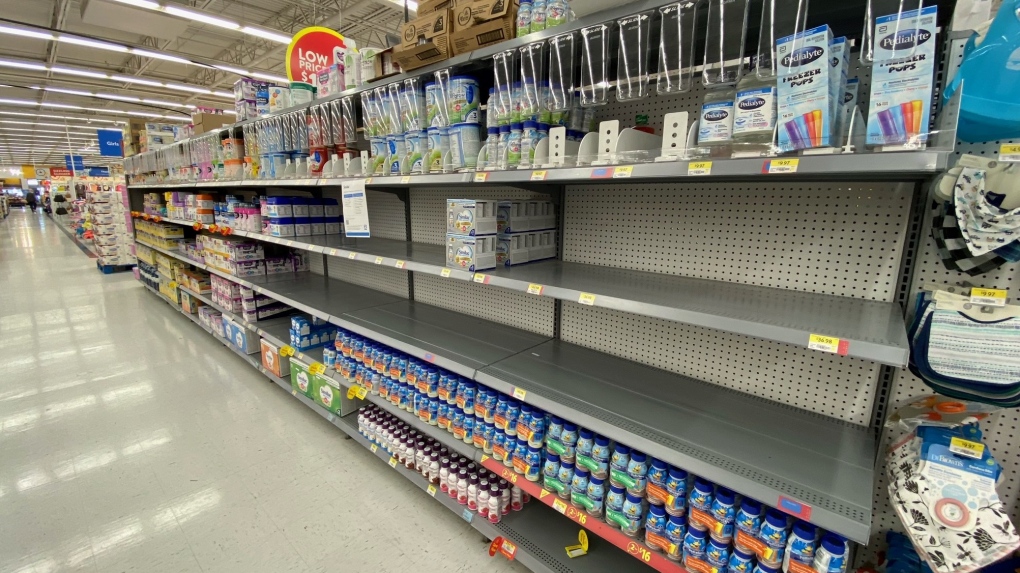 Baby formula shortage at a Toronto store. (CTV News Toronto/ Sean Leathong)The Retail Council of Canada has said Canada is not in a shortage, but the recall, coupled with supply chain issues related to COVID-19 has created pressure on other brands.

“I'm probably going to buy a couple more containers of (formula), just in case, because you never know," Laura Calma says while shopping at WalMart with her two-year-old.

Calma says there is still enough product where she shops, but as a parent, she is aware of the shortage in the U.S. “It's kind of a little scary, hopefully it doesn't come here in Canada," she says.

While shelves are already starting to see gaps, one of the major manufacturers of formula says it will be at least two weeks before things improve.

In a statement provided to CTV News Toronto, Chicago based Abbott Laboratories says, "Subject to FDA approval, we could restart our Sturgis, Mich., site within two weeks."

But, there could still be some time before shelves are at full capacity, as they added, "From the time we restart the site, it will take six to eight weeks before product is available on shelves."

Neha Daya says she has noticed more than just formula becoming scarce. “There's been a lot of shortages for baby things so we've just been stocking up when we find things," she says.