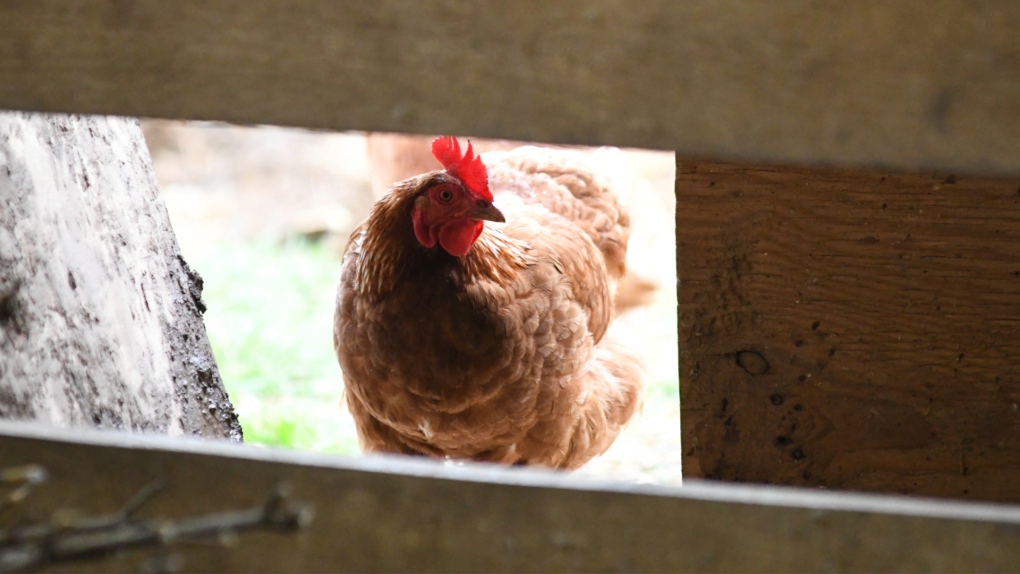 A chicken looks in the barn at Honey Brook Farm in Schuylkill Haven, Pa., on Monday, April 18, 2022. (Lindsey Shuey/Republican-Herald via AP)

Niagara Region Public Health announced Friday afternoon it is investigating a confirmed report of H5N1 avian influenza “in a mixed flock of birds including chicken, geese and ducks.”

“Only those working on the farm with the birds are at any risk, and Public Health has followed up with each one of them individually,” Dr. Joanne Kearon, Resident Physician with Niagara Region Public Health, said in a statement.

“We are working with our provincial and federal partners to contain the infection so that it doesn’t spread to any other birds, and in turn doesn’t pose a risk to anyone else.”

The region’s health agency says it is working with the Ministry of Health, Ministry of Agriculture, Food and Rural Affairs, and the Canadian Food Inspection Agency to keep an eye on the situation.

Avian influenza, commonly known as “bird” flu, mainly affects wild birds and other domestic poultry like shore birds, ducks, and geese. It is uncommon for the virus to spread between birds and humans, but Niagara Region Public Health says it has happened before.

How it spreads to people is not known, but the health agency notes human cases of avian influenza have been traced to those with direct contact with infected poultry – both live and dead – or their feces.

Those with backyard chickens are also advised against bringing them indoors, “kissing and snuggling live poultry,” and are asked to sanitize their equipment frequently.

Ontarians can report sick or dead birds to the Ontario Regional Centre of the Canadian Wildlife Health Cooperative at 866-673-4781.

Four men are facing dozens of charges after a years-long drug-trafficking investigation that police say disrupted the expansion of the Hells Angels motorcycle gang on Vancouver Island.

Canada exits the 2022 FIFA World Cup with three losses to its name, registering the joint-worst record in tournament history, but head coach John Herdman and his players remain hopeful the program can become something special after this jolting learning experience.

Poland's culture authorities said Thursday a painting by Wassily Kandinsky that was auctioned in Germany for almost 390,000 euros belongs to Poland, where it was stolen in 1984.