TORONTO -- Across Canada drivers use remote starters to turn their vehicles on during cold winter mornings but an idling engine can produce twice as many exhaust fumes as an engine in motion.

The idling limit in Toronto used to be three minutes but in 2010 the by-law was changed. In Toronto, “The idling control by-law limits idling to no more than one (1) minute in a 60-minute period.”

Across Canada and the U.S., many municipalities followed suit. In the state of New York, the small village of Hastings-on-Hudson, brought in anti-idling laws last month.

“By switching off your car and not idling, you are making a contribution to reducing greenhouse gases," the mayor of the village Nicola Armacost said.

Excessive idling not only contributes to global warming. It’s linked to asthma, decreased lung function, cardiac disease and cancer. One minute of idling puts more carbon monoxide in the air than smoking three packs of cigarettes. 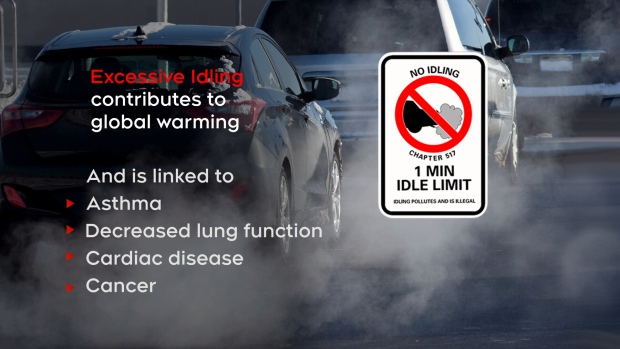 Auto experts at Consumer Reports say there’s no good reason to keep a car running when it’s not moving, even on a cold morning.

“When you start the car, you want to give it a little bit of time, say 30 seconds, to build a little heat into the engine, get the fluids rolling. That’s really about as much time as most people take to get settled in and to buckle up,” Consumers Reports Jeff Bartlett said.

Some new vehicles have a built-in fix

“Many cars today have a start and stop system, so when you come to a stop for ten seconds or more, it’ll shut the engine off to save that fuel and that saves you money at the same time,” Bartlett said.

You can also reduce idling by not using the drive-thru or remote starters and shutting your engine off anytime you’re sitting idle.

Even though newer cars have the option to turn themselves "off and on" at a stop light if you have an older car it's not something you should do manually.

Older vehicles are not designed to be turned "off and on" frequently and could create a safety hazard.