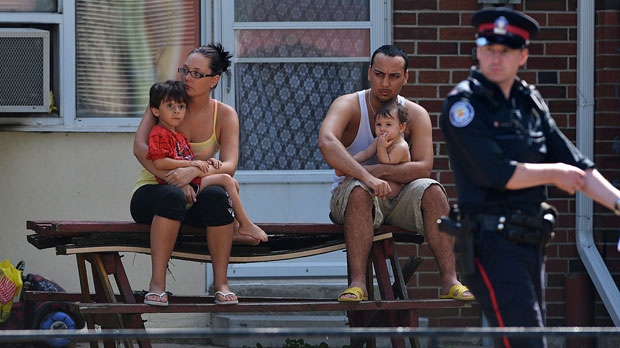 Neighbours watch on as police walk by on Tuesday July 17, 2012 near the scene of a shooting on Danzig Street where 19 people were injured and 2 confirmed dead at an outdoor barbecue that took place on Monday July 16, 2012 . (Aaron Vincent Elkaim / THE CANADIAN PRESS)

In some of Toronto's toughest neighbourhoods, where gangs and drug dealers battle it out for territory, social service providers are also fighting tooth and nail for the hearts and minds of at-risk youth.

On the front lines of notorious neighbourhoods such as Regent Park, Jane and Finch and St. James Town, groups with small budgets and few staff are running everything from mentorship programs to tutoring groups and sports programs.

These programs are designed to give at-risk kids hope, a future, and the positive influences that will encourage them to make the right choices at key crossroads in their lives.

But with four recent shooting deaths in a four-day period, and signs that retaliatory violence is underway, questions have emerged: Are the social programs working? Or does the only solution lie in a larger police presence?

Rob Perry, a youth worker in downtown Toronto's Regent Park, is on the front lines in the fight to keep kids out of gangs and involved in programs that will give them hope and plans for a brighter future.

"Social programs in my neighbourhood are supplements to parenting. We're supports for children in communities where parents largely can't afford to send their kids to fancy sports camps or ballet lessons or art school," Perry told CTVNews.ca.

"In communities where parents don't have the resources to access the vast majority of those types of opportunities for their kids, local youth workers, local community centres, are what come in and are there for those children."

As a youth worker with The Salvation Army, Perry helps run programs ranging from sports camps and basketball teams, to mentoring and tutoring programs and a weekly after-school kids group. All told, those efforts reach hundreds of kids each year.

Many of the children who grow up in those programs become junior leaders as teens and acquire valuable experience and references that later help them find their first job.

In many cases, those same young men and women later look back on their years of involvement with The Salvation Army or one of the other local groups as a powerful anchor in their lives.

"The best youth programs are a way of outreach where really healthy adults come into the lives of kids through sports, mentoring, or whatever it might be. And there are countless youth in the neighbourhood who credit a youth worker or a mentor or tutor from various agencies as being the one they would turn to," Perry said.

"Whether they would use the words 'they kept me from a negative path' or not, I'm not sure, but many, many youths have found that kind of refuge."

It's not always relationships that make the difference either. In many cases a young person discovers a passion for sports, dance, or music through a social program, and their life suddenly takes on new meaning.

Perry said one young man he works with recently discovered a love of drumming.

"I can't see the future, I can't tell you had he not got excited about music he'd be selling drugs. But I can tell you he came from the same streets, same neighbourhood, same socio-economic background as many people who have made that choice."

In the end, kids are kids, Perry said. They make mistakes and have to live with the consequences. But in Regent Park, Jane and Finch or one of the city's other troubled neighbourhoods, the consequences are often more severe.

For a young person in any of those areas who decides to try marijuana, shoplifts or gets in a fight, they can easily be branded as a troublemaker or criminal by local police -- a label that can shape the rest of their life.

Winston LaRose, a representative of the Jane Finch Community Citizens Organization, has seen that phenomenon first hand. As a longtime advocate for residents and the founder of many social programs, he sees a culture whereby residents are often treated like criminals before they have even broken the law.

That creates tension between police and community members that often leads to an adversarial relationship. Police expect young people to break the law -- and they often live up to that expectation, LaRose said, calling it a self-fulfilling prophecy.

"These people are to me in a large prison where police officers are circulating around the area making sure they are behaving themselves. We're bringing the prison environment to the communities and into the schools," said the 74-year-old community worker.

The impact of employment

LaRose sees the value of social programs that engage young people in the arts, sports or with mentors. But his life's work has focused on helping provide employment skills to young people, believing that employability and work ethic are the keys to lifelong success.

"What I see that this community needs is jobs and job training, preparation for these youngsters that are turning their lives around," he said.

LaRose has helped bring that about over the years through a program that helped train young people and new immigrants as tailors or seamstresses, and through the Tropicana Community Services program, which helps youth find on-the-job work experience.

But he agreed with Perry, saying that employment skills on their own are not enough to save a life. Family support, responsible parenting, education and a community that upholds those values are all vital pieces of the puzzle, he said.

In the end, the decision to join a gang, sell drugs, or pick up a gun is the sole responsibility of the young person standing at that crossroad, both men said.

All they can do is provide the tools to help them make the right choice.