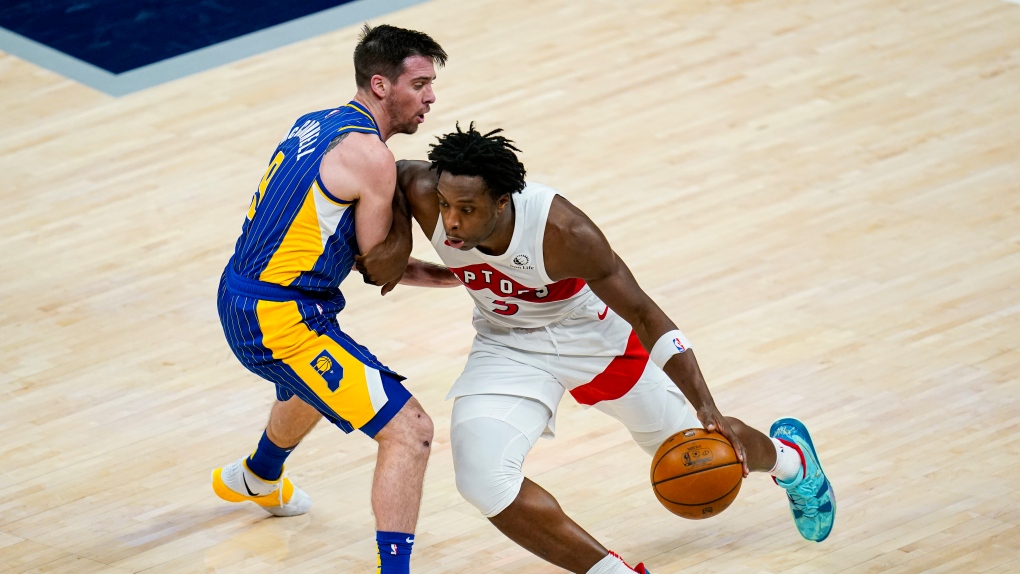 INDIANAPOLIS -- OG Anunoby scored a season-high 30 points and made three free throws in the final minute to break a tie and help the surging Toronto Raptors beat the Indiana Pacers 107-102 on Sunday.

The Raptors have won two straight and five of their last six, including this one without injured All-Stars Kyle Lowry and Pascal Siakam.

Myles Turner had 25 points and six blocks to lead the Pacers, who have lost three of four.

Toronto took control midway through the second quarter and extended the lead to 58-47 at the half. After Indiana cut the deficit to 77-75 following three quarters, the Pacers took two brief leads early in the fourth.

But the Raptors broke an 82-all tie with an 8-0 run. Indiana tied the score again with 1:07 to play, but Anunoby made three of four free throws and the Raptors scored the final five points.

Anunoby extended his streak of consecutive double-figure scoring games to eight. He also made four 3s, giving him 27 in the last eight. Fred VanVleet scored 21 points and has made at least one 3-pointer in a franchise-record 48 consecutive games. Toronto forced 13 turnovers and went 10 of 18 on 3s in the first half. Norman Powell added 20 points.

The Pacers' Domantas Sabonis had 10 points and 10 rebounds in the first half alone for his 16th consecutive double-double to open the season. It's the longest streak of his career and the longest in Indiana's NBA era. He finished with 10 points, 19 rebounds and five assists. Justin Holiday had 16 points and 10 rebounds. Jeremy Lamb scored 13 points and has 42 in three games since returning from a torn anterior cruciate ligament in his left knee.

While Lowry had been listed as a game-time decision on Toronto's injury report because of a sore right foot, Siakam was a surprise inactive with swelling in his left knee. It's unclear whether either will be available for Monday night's rematch.

Indiana welcomed fans back to Bankers Life Fieldhouse on Sunday. Team officials announced previously they would cap attendance at 1,000. After Monday night, they will consider increasing the capacity. Local and state officials have said the Pacers can have as many as 4,500 fans inside the arena.