TORONTO -- Mayor John Tory says he is glad police officers responding to anti-lockdown protests in the city’s downtown core on Saturday ticketed people who weren’t following the rules, calling the demonstrations “not right” and “not safe.”

Hundreds of protesters could be seen marching in the streets downtown on Saturday afternoon, calling for an end to lockdown measures put in place to slow the spread of COVID-19.

Officers responding to the protests broke up demonstrators, who had gathered at Nathan Phillips Square and Yonge-Dundas Square.

Three people were arrested, including two of the organizers, who were charged with common nuisance.

A 22-year-old was also charged with assaulting a police officer and obstructing police.

A total of 18 charges of failing to comply with the Emergency Management and Civil Protection Act were laid as a result of the protest, according to police.

“I understand the right to protest, but in my case they not only demonstrate contrary to the regulations that are out there, and they do the same outside of Premier Ford’s house… they also stop people from people from coming in and out of their homes in our building,” Tory said Sunday.

“It results in people living where I live, and same with Premier Ford’s neighbours, to be told to have to stay in completely, they can’t even go for the walk the rest of us are able to go for or go to the grocery store or anything like that.” 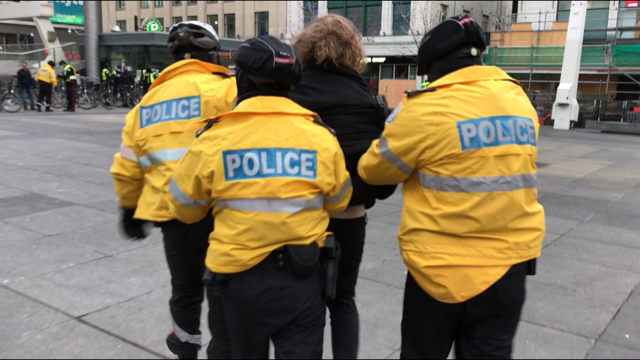 The mayor said he was pleased that enforcement action was taken against the protesters this weekend.

“Putting the rules and regulations aside… it is also just unsafe for them with each other. I know they say they don’t believe that. It is a risk to other people who are out and about. It is just no right and it is not safe,” he said.

“The police do what they have to do and I’m glad, even though I don’t give the direction to the police, that they wrote some tickets yesterday. I find it very distressing that someone assaulted a police officer. I mean free speech is one thing and assaulting a police officer is entirely different.”

As part of a new series of public health measures implemented by the province last week, all Ontario residents have been told to only go out for essential purposes as part of a stay-at-home order.

The number of people permitted to gather outdoors has also been reduced from 10 to five people.

“Our officers will be on scene for any of these protests. Any large gatherings of more than five people, we will have uniform presence there, and charges will be laid if necessary,” Const. Alex Li said Saturday.

“We’re appealing and urging for public and citizens to just please do your part and stay at home. Protect yourselves, protect the broader community.”