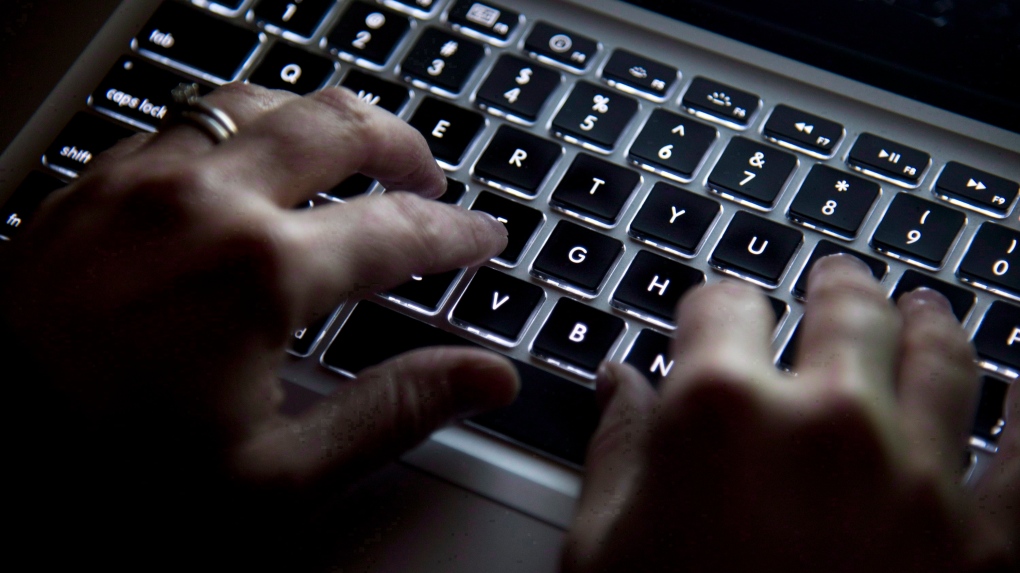 A woman uses her computer keyboard to type while surfing the internet in North Vancouver, B.C., on Wednesday, December, 19, 2012. (THE CANADIAN PRESS/Jonathan Hayward)

TORONTO -- A dozen individuals have been ordered to pay thousands of dollars in damages for defamatory statements they made in an internet chat forum, even though the plaintiffs don't know who they are and collecting will likely prove difficult.

The judgment in Ontario Superior Court of Justice comes despite the difficulties in suing people who post inflammatory comments anonymously, and who then fail to respond to the resulting legal proceedings against them.

What it does make clear, however, is that anonymity and failure to respond do not necessarily preclude a case from proceeding, or a court from awarding damages.

"If people want to make hurtful statements about others and then try to hide from the responsibility to prove the truth or other justification for doing so ... their cowardice is reprehensible," Justice Frederick Myers said in his judgment released Monday.

The defamatory comments were posted in 2014 and 2015 on the investor-oriented Bullboard message forum on the website stockhouse.com. They were directed at Toronto-based Theralase Technologies Inc., a publicly traded pharmaceutical company, and its principals, Roger Dumoulin-White and spouse, Kristina Hachey.

Essentially, the posts criticize them both professionally and personally, accusing them among other things of lying and illegal behaviour.

"Roger is like a pest diseased dog spreading his filthy rabbies (sic)," the user Nastynasta wrote. "A mangy dog that won't go away until he's put down."

"The management team are liars!!!" TrueNorthStrong wrote. "Been lying for 21 years!!"

Hachey was also the object of at least one "disgusting" misogynistic post that had nothing to do with investor complaints, the judge found.

Stockhouse.com said it was unable to give the real identities of the posters to the plaintiffs. However it did provide email addresses, allowing the plaintiffs to serve the lawsuit.

The court ruled the service by email and, in some cases, by private messages via stockhouse.com was good enough to assume the posters were aware of the proceedings, and allow the case to go ahead.

Only one defendant responded; the case against him is ongoing. The other defendants -- including one person who has since been identified as a former disgruntled Theralase employee -- were noted in default.

Ultimately, Myers ruled that Dumoulin-White and Hachey had proven their claims. He awarded general damages ranging from $7,500 to $35,000 against each defendant in favour of each plaintiff. Myers also assessed aggravated or punitive damages against some defendants worth thousands of dollars more.

Myers also ordered the defendants to pay $55,000 in legal costs, saying their failure to take part in the lawsuit made their conduct all the more abusive.

Collecting on the award, however, might yet prove tricky, but Myers said that was not his problem.

"How the plaintiffs will go about amending the title of proceedings for enforcement purposes once they identify one or more of the defendants is not before me," Myers said. "I make no findings about how any judgment is to be enforced against a person who is currently identified only by a pseudonym."

Hachey, the chief financial officer at Theralase, said she and Dumoulin-White were happy that "justice has finally been served and our reputations have been vindicated."

This report by The Canadian Press was first published Jan. 15, 2020.