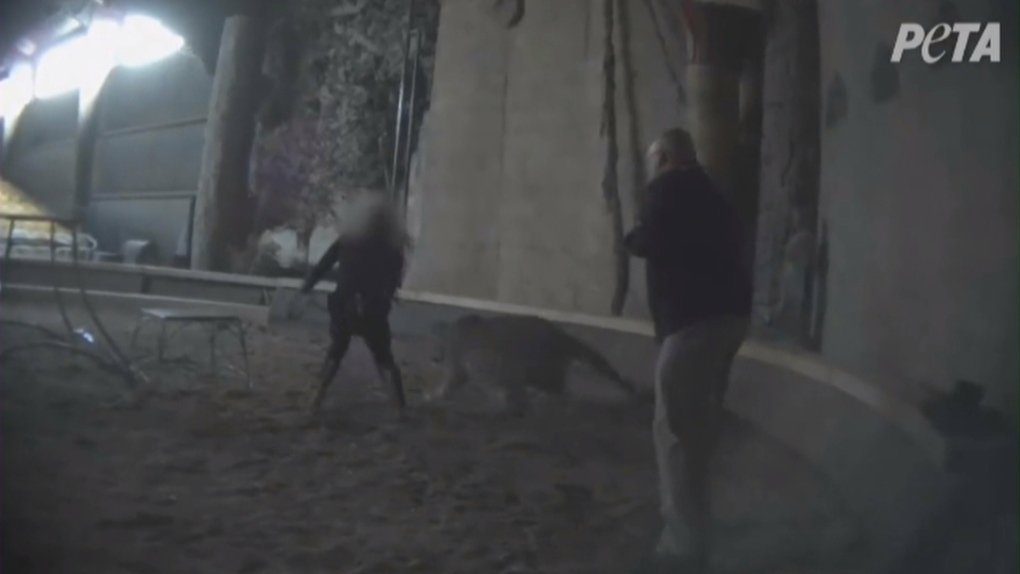 Michael Hackenberger, owner of the Bowmanville Zoo, is seen striking a tiger in a video released by PETA.

In December, the People for the Ethical Treatment of Animals released footage that appeared to show Michael Hackenberger repeatedly whipping one of his tigers at the Bowmanville Zoo and boasting about it.

Earlier this week, the Ontario Society for the Prevention of Cruelty to Animals laid four counts of causing an animal distress and one of failing to comply with the prescribed standards of animal care, all under the authority of the provincial OSPCA Act.

"The OSPCA should have charged Hackenberger under the criminal route," said lawyer Camille Labchuk, the head of Animal Justice, an animal rights organization.

"They've got a very strong case. This guy deliberately and wilfully caused pain to the tiger. It's conclusive; the video doesn't lie."

The OSPCA has the authority to lay Criminal Code charges but chose not to, according to OSPCA senior inspector Jennifer Bluhm.

"In consultation with the Crown attorney, these five charges were the most appropriate in this case," she said.

The Bowmanville Zoo and Hackenberger have declined interview requests, but on the zoo's Facebook page, Hackenberger said he was not guilty of the charges. He also said he has stepped down as director of the zoo "until such time as this legal matter is resolved."

Meanwhile, PETA said it was satisfied its investigation was taken seriously.

She said the organization began looking into Hackenberger after he was seen on live television in Toronto last summer angrily cursing an unco-operative baboon that resisted riding a miniature horse.

So they enlisted one of their members to go undercover and begin working at the zoo with a hidden camera.

"It didn't take long for the eyewitness to get that footage," Peet said.

"Cause I like hitting him in the face and the paws ... and the beauty of the paws being on the rock, when you hit them it's like a vice ... it stings more," Hackenberger says to the PETA member with the hidden camera.

PETA released that video in December, which made headlines around the world. The organization also sent a copy to the OSPCA.

Bluhm said the video is the key piece of evidence in the case, but they've also interviewed everyone involved in the incident, including the PETA undercover operative and Hackenberger himself.

It's unclear if there have been problems at the zoo before. The OSPCA runs a voluntary zoo registry as part of the $5.5 million fund it receives each year from Ontario government.

The animal welfare agency said it inspects 69 zoos and aquariums in the province twice yearly, but cannot discuss the results of those inspections.

"We can only tell you we've been there, but not what we saw," Bluhm said.

Many of the Bowmanville Zoo's animals appeared in a variety of Hollywood movies. The zoo's other tiger, Jonas, for example, is famous for appearing in the movie adaptation of "Life of Pi." And many of its animals, including tigers, can be rented out for events or private encounters, according to the zoo's website.

Hackenberger is set to appear in court on Tuesday.

He faces a maximum fine of $60,000, two years in jail and a lifetime ban from owning animals if convicted.