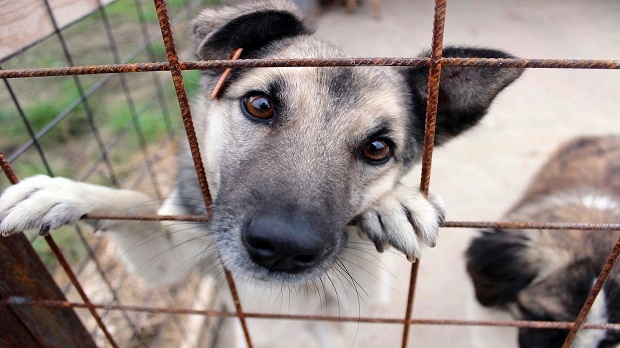 In this photo October 2016, a stray dog peers from out of his cage at a dog shelter in the north east of Romania. On Thursday, Kitchener locals were upset after an animal rights organization played a documentary depicting animal cruelty instead of a Halloween-themed special. (ASSOCIATED PRESS/Liliana Ciobanu)

An animal rights organization is defending its decision to air a documentary on animal exploitation after billing it as a horror movie for early Halloween revellers.

The Kitchener Ontario Animal Liberation Alliance (KOALA) readily concedes it tricked nearly 200 people into turning up for last Thursday's free screening of a film which it advertised as "possibly the scariest movie ever created."

Instead of a slasher flick or Halloween-themed special, however, it screened "Earthlings," a 2005 American documentary depicting the treatment of animals in areas ranging from pet stores to the fashion industry.

KOALA member Malcom Klimowicz says the graphic footage in the movie is frightening by any measure, adding that what he calls the true horror of the film comes from the fact that it depicts real events.

But half of the 140 people who were allowed into the theatre for a screening objected to the tactic, walking out within the first half hour.

Many of them denounced the group for false advertising and criticized them for not providing the good time suggested in promotional material.

Klimowicz says the group delivered exactly what was promised.

"People came expecting to see a terrifying horror movie, but it's terrifying in the sense that it was real life," he said in a telephone interview.

"Earthlings," directed by Shaun Monson and narrated by Academy Award nominee Joaquin Phoenix, relies on secretly shot footage of animal treatment in a variety of industries.

Among the images in the film are shots that depict abandoned pets being killed in a gas chamber, cattle being branded before slaughter, and pigs being drowned in boiling water.

Klimowicz said KOALA was straightforward about their plans when they reserved the theatre where the film was aired, disclosing exactly which movie would be shown.

He said the Princess Cinemas only voiced concerns about audience reaction and had allowed the group to book the venue.

The theatre did not respond to a request for comment.

Klimowicz said audience members were not charged any money to see the movie and were enticed with offers of vegan baked goods, gift cards and even a draw for a $200 cash prize if they sat through the screening.

Many of the audience members, however, were not mollified.

Klimowicz said the exodus from the theatre began about 20 minutes after the film started playing and said about half the attendees were gone in the first half hour.

"I appreciate what you're doing, but to fool people into your cause is really wrong," one film-goer fumed in a video from KOALA which chronicled the group's movie experiment.

Others castigated the group for showing something "very disturbing," saying they did not want to see such graphic material.

The estimated 70 people that did remain for the film, according to KOALA's estimates, had a different reaction, the group suggested.

They conceded their surprise at being tricked into watching the film, but praised the group for exposing them to footage and issues they had not previously considered, according to the video from KOALA on the experiment.

"I really respect what you did here tonight," one man said. "You definitely were able to draw a crowd, and whatever anyone chooses to believe, you've given them something to think about."

Klimowicz said the strategy was necessary to reach a segment of the population who may not otherwise be exposed to discussions surround animal welfare.

"These industries really try to hide how animals are tortured and confined and treated and killed for food and things like that," he said. "We brought to light what people don't know."