Tennis star Bianca Andreescu is not asking Santa for anything this year—instead, she just wants the Toronto Maple Leafs to win the Stanley Cup.

“That would be amazing. That would definitely be a wish come true.”

Andreescu was in Toronto for the annual tree lighting ceremony at the Eaton Centre as the host of the festivities.

About 15,000 people crowded into the mall on Thursday night to watch the tree light up and see the 19-year-old in person. Speaking with CTV News Toronto before the tree lighting, Andreescu said that she was surprised by the number of people who came out that night.

“It’s been truly a blessing. I really don’t know the impact I’m making,” she said. “I am just beyond grateful. I’m really happy to kick off the holiday season here.” 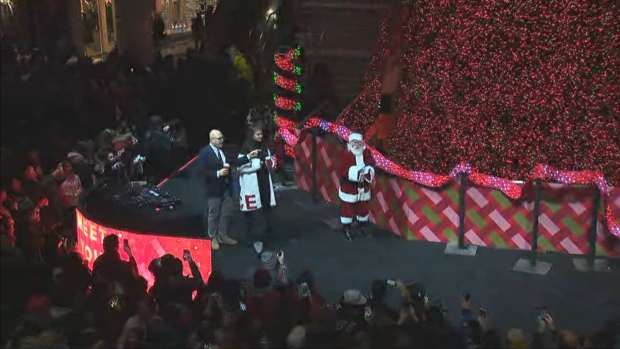 Andreescu made international headlines after she became the first Canadian to win a Grand Slam singles title, beating out tennis legend Serena Williams in the U.S. Open women’s finals. Earlier this month, she also became the highest-ranked Canadian tennis player in WTA history.

She said that she has learned a lot about herself throughout her 2019 journey.

“It wasn’t all butterflies and rainbows. I’ve been injured quite a lot. I’m dealing with an injury right now, but I really learned to persevere as much as you can because this is what I love to do.”

When asked what she wanted for Christmas, she started by saying “world peace” before wishing for the Leafs to join her and the Raptors in a championship win.

“All I can say is that I am really grateful for what has happened in my life and I really can’t ask for more.”