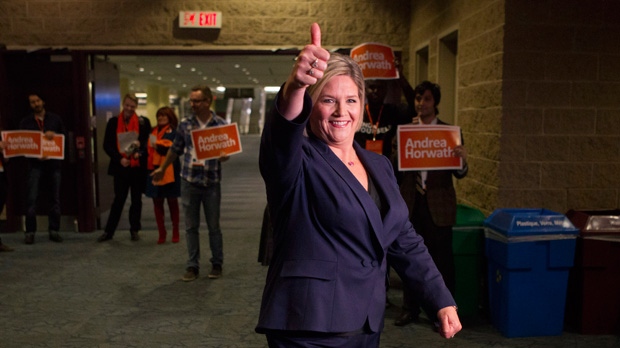 TORONTO - NDP Leader Andrea Horwath faces a crucial vote on her leadership today as more than 1,000 party members from across Ontario gather at their annual convention in Toronto.

Horwath faces an automatic leadership review every second year, but this is the first following the party's third place finish in the June 12 election, when the Liberals won a majority government and the NDP lost its balance of power.

Many New Democrats are still angry over the party's campaign efforts, and mad at Horwath for triggering the election by rejecting what they considered to be a very NDP-friendly and progressive budget.

Horwath says she's listened to her critics and reached out to party members to address their concerns, and will hash out the issues with them this weekend.

She will have one last chance to address NDP delegates this morning before the leadership vote.

There are no open challengers to Horwath's leadership, and most of her elected caucus is supporting her, but a group calling itself the NDP's socialist caucus says she should resign for running "a right-populist campaign."