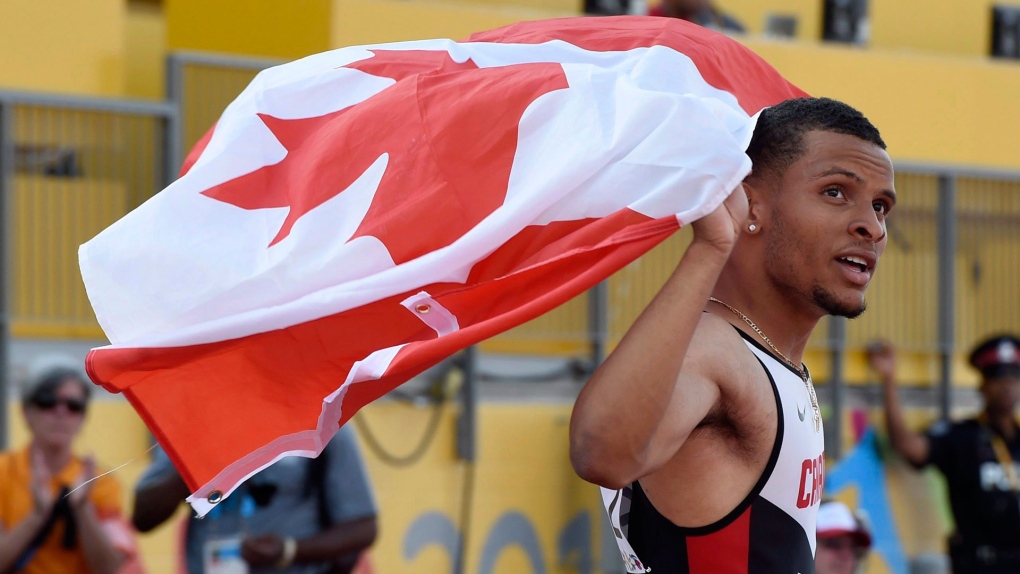 Andre De Grasse, of Canada, smiles after winning gold in the men's 200m final during the athletics competition at the 2015 Pan Am Games in Toronto on Friday, July 24, 2015. (Frank Gunn / THE CANADIAN PRESS)

TORONTO -- Two nights after Andre De Grasse powered Canada to a gold medal at the IAAF World Relays in the Bahamas, the 22-year-old was tucked away in the corner of a rooftop bar in Toronto's upscale entertainment district.

At the launch party for DTK Men's Power Issue, the Canadian sprinter, who appears on the magazine's cover, was the star of the show.

Wearing a slim-cut blue suit with ankle-length pants over a black T-shirt -- Hugo Boss had dressed him for the event -- he blended in seamlessly with the crowd of reedy models and stylish fashion executives.

Olympic champion Donovan Bailey and performance artist Istvan Kantor, who's known for spraying vials of his own blood on walls of the world's most famous museums, were among the party-goers. Kantor wore blue-tinted glasses and a mouthful of grillz. The word "NEOISM" is tattooed down the back of his head.

"I feel really comfortable," De Grasse said. "I don't just want to be defined on the track. I want to be known for off the track things too."

It's been a whirlwind few months since De Grasse sprinted to three medals at the Rio Olympics. He spent the fall at USC finishing his degree. He travelled to Germany and Chile to do appearances for Puma, his main sponsor. He did the fashion shoot for DTK Men in Los Angeles.

"I think it only took about three to four hours. They said I'm really photogenic," he said, then laughed. "I'm not trying to be cocky or anything, that's what they said."

He has signed sponsorship deals with Gatorade and PricewaterhouseCoopers since Rio. He turned down many more opportunities.

"I think I've said no to probably 70 to 80 per cent of the opportunities, I've only capitalized on maybe 20 per cent of them," De Grasse said. "Overall, I've made good decisions on what I want to be known for."

De Grasse planned to spend early Wednesday morning receiving therapy and training before a scheduled photo shoot with Pizza Pizza, then an evening flight back to his home base in Phoenix.

Three months ahead of what will be a historic world championships in London in August, scheduling his time is a meticulous juggling act for his managers and his coach Stu McMillan.

"It's not a massive deal as far how it affects training," McMillan said. "It's a bigger deal how it affects his life, he's always jumping on planes every few weekends."

"I've never experienced anything like this, trying to just manage it, talking to my coach, talking to my advisers to say 'Hey, what's more important? What can we fit in here? How can we fit in training?"' De Grasse said. "It's been a pretty busy schedule for me. Today I got in my training early in the morning so I could be here for the party tonight."

De Grasse, Gavin Smellie, Brendon Rodney and Aaron Brown ran to gold in the 4x200 at the World Relays on Sunday in Nassau, Bahamas. De Grasse won't run an individual race until the Doha Diamond League meet on May 5.

He'll get likely his last stab at Usain Bolt at the world championships. The Jamaican superstar is expected to retire afterward.

"Usain is one hell of an athlete, and for me to be one of the best I've got to beat him, so I've got to continue to keep working hard, stay motivated, stay focused," De Grasse said. "It's his last world championships. It's going to be tough for me. I've just got to try to spoil his parade."

De Grasse figures he's watched his Rio races about "10 times, especially the 200 metres, because I felt that was the race I could've won. So I wanted to just keep watching, especially with my coach, to see what I did wrong, what mistakes I made so I could learn from them for the future."

De Grasse has spent more time in the weight room than he did last season. He smiled when a reporter noticed he'd put a little more muscle on his angular frame, saying "That's a nice compliment by the way. I want to get a little more muscular."

McMillan said De Grasse's biggest challenge this season will be managing the pressure, and an entirely different set of expectations than he carried going into Rio.

Physically, he's a lot healthier than he was at this time last year, McMillan said, partly because he spent most of the fall away from the track.

"He's looking good," McMillan said. "It's setting up for a really good season."