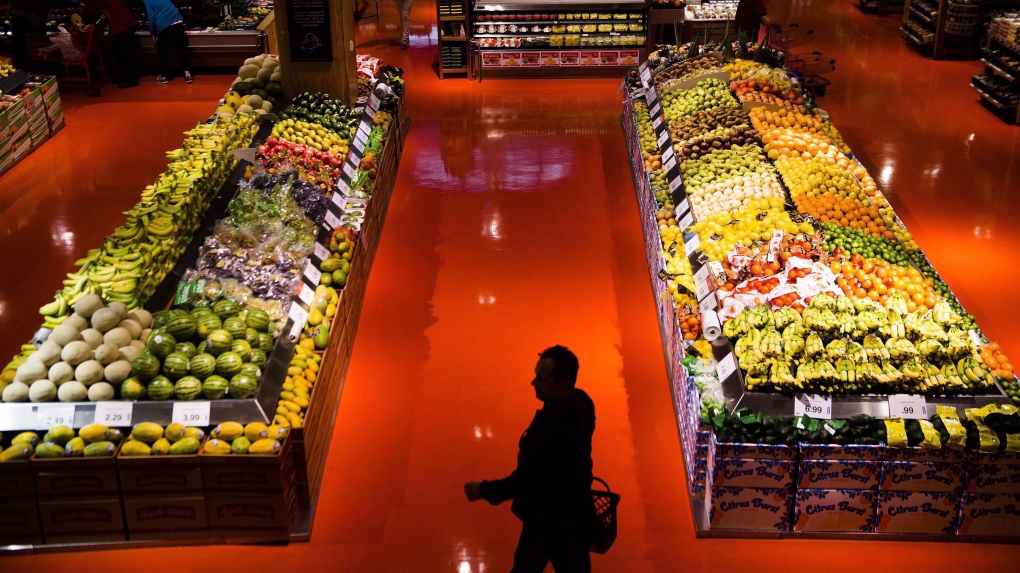 People shop in the produce area at a Loblaws store in Toronto on May 3, 2018. THE CANADIAN PRESS/Nathan Denette

TORONTO -- Some consumers have vowed to take their patriotism to the supermarket and buy only made-in-Canada products after the federal government slapped retaliatory tariffs on dozens of U.S. goods as part of an escalating trade war with the country's biggest trading partner.

However, avoiding products from south of the border that are on the tariff list is easier said than done, thanks to our integrated economies and the fact that many companies don't clearly label where their products are made.

The Canadian Press compiled an aisle-by-aisle list of some common grocery list items that are subject to the tariff and spoke to retail experts for tips on how to ensure products are Canadian.

- Yogurt: Most yogurt is made with Canadian milk and the country only imports $3 million of yogurt annually, so "it is almost impossible not to buy Canadian yogurt in the grocery store," says Mike von Massow, an associate professor of food, agricultural and resource economics at the University of Guelph. However, he's noticed that when there are shifts in demand or production constraints, yogurt is sometimes imported to fill in the gaps. To know for sure if the product is Canadian, von Massow recommends looking for the blue cow label that the Dairy Farmers of Canada stamps on products.

- Coffee (roasted and not decaffeinated): The coffee beans fuelling many Canadians' morning jolt aren't grown in Canada or the U.S., but you can find Canadian companies that roast coffee within the country. Kevin West, Tim Hortons head of coffee operations, says most of its coffee is roasted in Canada. Some products from Balzac's, Loblaw-owned President's Choice and Muskoka Roastery are also labelled to say they're both roasted and packaged in Canada.

- Whiskies: American whiskies, such as Jack Daniel's and bourbons are now subject to a 10 per cent tariff. But there's plenty of Canadian whisky to go around. Crown Royal's Northern Harvest Rye, which was named the 2016 World Whisky of the Year, is distilled by the British company in Gimli, Man and J.P. Wiser's Deluxe is made in Windsor, Ont. Plus, craft distilleries have recently emerged as "the new hot trend," bringing with them a wealth of new local whisky options, said von Massow. Most whiskies say right on the label where they're made, making an "imbibe Canadian" decision easy.

-Orange juice: Canadians won't find any juice made with homegrown oranges, but some orange juices are processed in Canada. Those juices are often made from concentrate from fruit grown in South America because water is expensive to ship, so companies send the concentrate to Canada, re-add water and package it. Coca Cola, for example, produces Minute Maid orange juice at various plants in Canada using oranges sourced from Brazil and a spokesperson for the company said the tariffs only affect finished product, so its orange juice is exempt.

- Water: Waters, including mineral and "aerated varieties" or those containing added sugar, sweetening or flavours are subject to tariffs. Plenty of bottled water companies operate from Canada and widely label their water with information about its origin. Multinationals such as Nestle bottle water within the country, but if you're looking for a company that is Canadian in every sense, Quebec-based Naya has springs in Mirabel, Que., and Revelstoke, B.C.

- Strawberry jam: Canada's humid summers, short growing season and vulnerability to mould and pests make the farming of soft fruit difficult, says Gerhard Latka, president of Canadian jam maker Crofter's Food Ltd. His company doesn't use Canadian strawberries, but the product still counts as Canadian because it's produced in Parry Sound, Ont. If you want to buy Canadian, aside from Crofter's, you can find some E.D. Smith jams labelled "prepared in Canada" or varieties from Toronto-based Kitten and the Bear.

- Maple sugar and syrup: Canada is the world's largest producer and exporter of maple syrup and it's not difficult to find plenty of bottles on grocery store shelves emblazoned with made in Canada labels, says von Massow. "It will be relatively easy to buy product that is labelled product of Canada," he says, noting he often buys maple syrup from his neighbour. "The inclusion of maple syrup on the tariff list was entirely political because we import a very small amount of maple syrup."

- Soya sauce: A peek at the condiment aisle of a Toronto grocery store reveals most of the big brands make their soya sauce in China, so they're exempt from the tariffs placed on U.S. producers.

- Ketchup and tomato sauce: Even though both French's and Heinz are American companies, some Canadians began to shift their ketchup purchases towards French's, which produces its ketchup at Ontario plants, after Pennsylvania-based Kraft Heinz vacated its Leamington, Ont. facility and moved to Freemont, Ohio in 2014. For those who are new to ketchup politics, some companies have started to include country of origin information on their labels.

- Mayonnaise, salad dressing and mixed condiments: The Canadian Press took a peek at these products at stores and found most lacked country of origin labels. Kraft Heinz, which commands the lion's share of shelf space for such products, did not respond to a request for details about where they are produced.

-Cucumbers and gherkins: Canadian-grown cucumbers are available year-round, but are more expensive and less plentiful in the winter months, says Joseph Sbrocchi, the general manager of the Ontario Greenhouse Vegetable Growers. Homegrown gherkins are also easy to find as most grocers or farmers label and advertise where their vegetables are grown.

- Licorice candy: The tariffs are bad news for licorice lovers. Most licorice comes from one or two plants in Pennsylvania and aren't likely to be made with Canadian ingredients, says von Massow. "You will probably have to switch from your favourite," he says. "There are no Canadian Twizzlers to my understanding, so you'll have to go to another product, candy or treat to buy in Canada."

- Toffee: Hershey's said it makes some toffee candies under its Allan label in Canada. The Canadian Press couldn't find any other toffees labelled as made in Canada in Toronto grocery stores.

- Chocolate in blocks, slabs or bars: Canada doesn't grow cocoa for chocolate, but there are companies that produce chocolate bars, blocks and slabs domestically. Hershey's said its Brookside Dark Chocolate products are made in Canada, and Canadian chocolatier Purdy's makes all of its chocolates in Vancouver, B.C.

- Other sugar confectionery: Canada produces and refines some sugar within the country using imported ingredients or from sugar beets that are grown domestically, but that doesn't account for all of the sugar on the Canadian market, says von Massow.

- Prepared meals of spent fowl (hens raised to lay eggs, which are processed for meat when their productivity declines), pizza and quiche: These products are a bit tricky because they often use several ingredients and don't list where each is sourced from. If the product relies on seasonal ingredients, like fruits or vegetables, it is possible it is made with Canadian ingredients for only part of the year. "A lot of times it will say 'manufactured for' and have a Canadian company, but that doesn't mean it is manufactured in Canada," says von Massow. "The only way to know for sure is to ask."

-Soups and broths: Soups and broths are a set of items that experts say can shift where they're made based on the seasonality of ingredients. However, industry giant Campbell Company of Canada said its soups and broths are made at a manufacturing plant in Etobicoke, Ont. and labelled as such. The Etobicoke plant is slated to be shut down soon, making way for a new facility to open in Mississauga Ont., in 2019.

-Toilet paper and serviettes: Plenty of big-name toilet paper companies produce their products at paper mills south of the border, but produce them in Canada. The best way to find out where its produced is to call the company. Kruger's CEO said virtually all of its Cashmere and Purex products are made at plants in B.C. and Quebec and Cascades does its manufacturing in Quebec.