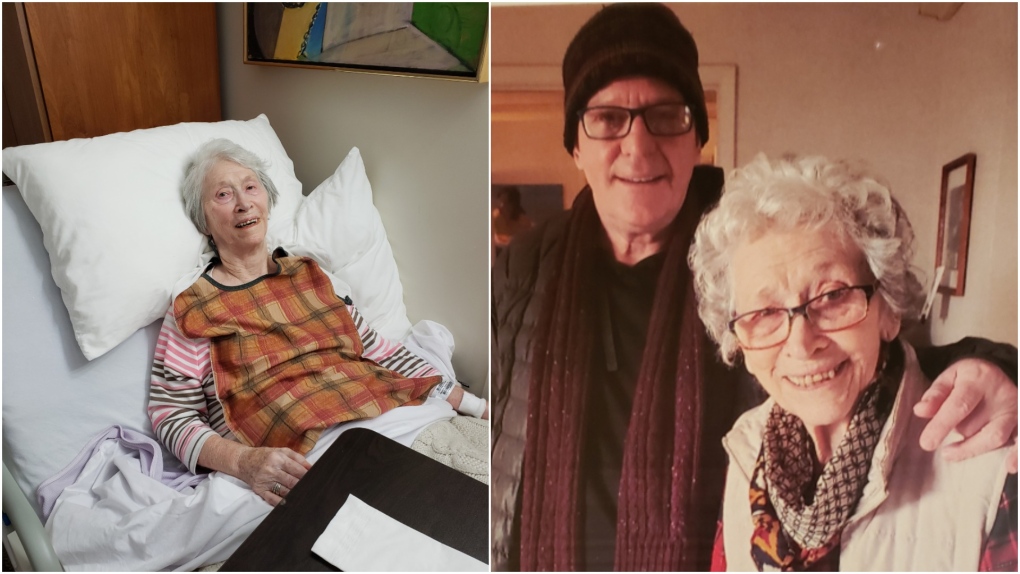 Tim House and his mother are seen in this undated photograph provided by family.

TORONTO -- A group of about 5,000 strangers, divided by borders but united in their shared grief and frustration over rigid travel restrictions, are calling for changes that would allow loved ones to enter Canada while still adhering to safety measures put in place at the height of the pandemic.

But for Mary House Goldman, a 60-year-old Toronto resident, the regulatory changes may not come in time.

Goldman has been trying to help her 62-year-old brother cross the U.S.-Canada border so that he can say goodbye to their mother, who is currently in palliative care.

She told CTV News Toronto that last weekend, her 85-year-old mother had difficulty swallowing and was brought to the hospital. After a number of tests were conducted, it was determined that she has a “large mass” on the left side of her brain.

The family was told she had months, maybe weeks to live.

“Now it's even more urgent that my brother comes here now,” Goldman said. “He would very much like to see my mom before she passes.”

Goldman said that her brother is an American citizen and has been living in relative self-isolation for months after undergoing a spinal cord surgery in February. She has been trying to contact officials at the Canadian Border Service Agency (CBSA) as well as her local MP in order to get a travel exemption.

“It’s been tough for him, emotionally and psychologically, because he’s had to heal from a traumatic surgery without his family around him,” Goldman said. “Then he’s had to deal with the idea that my mom might pass and he may not get to see her before she passes. And he may not be able to grieve with us either.” 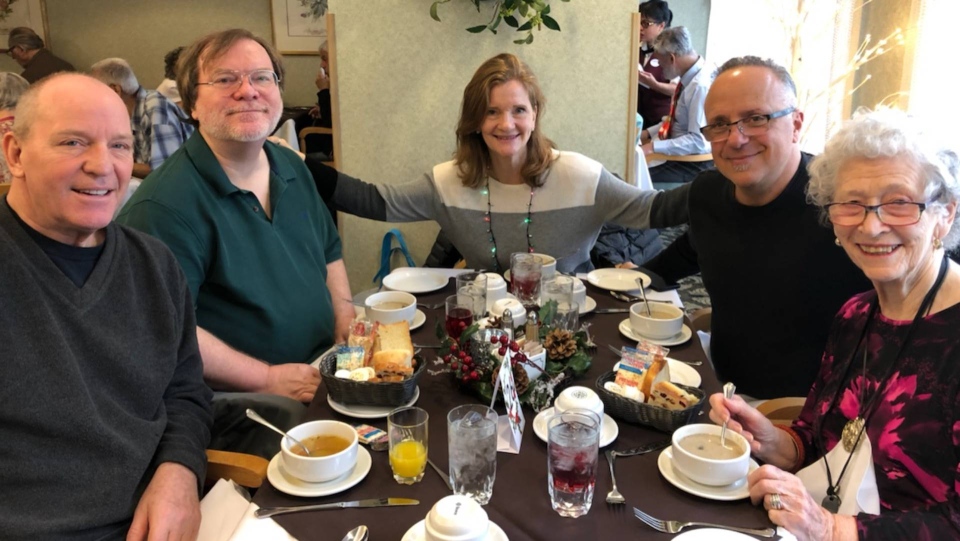 Under the current exemptions, which were put in place by the federal government in June, immediate family members of citizens or permanent residents can enter Canada. Those eligible under the exemption include spouses, common-law partners, dependent children and their children, parents, as well as legal guardians or “tutors.”

Committed partners who may not apply for common-law status, as well as adult children and siblings, are not included under the exemption.

Goldman is one of thousands who are asking the federal government to change those rules. She is part of “Advocacy for Family Reunification at the Canadian Border,” a group that has released a policy proposal and family reunification quarantine plan they hope will convince officials to make slight tweaks to the rules so that family members are able to see each other.

‘We are not asking for open borders’

“Advocacy for Family Reunification at the Canadian Border” was co-founded by 34-year-old Dr. David Edward-Ooi Poon after his partner arrived at Toronto Pearson International Airport only to be sent back home to Dublin, Ireland.

Poon was living in Dublin when the pandemic was declared. The couple had contacted numerous embassies in order to ensure they would be considered as common-law partners and had the right documentation to travel. Poon said they were told there shouldn’t be any problems and that they would be exempt from the travel restrictions put in place.

In March, Poon travelled back to Canada with the expectation that his partner, Alexandria Aquino, who is a nurse, would follow in April.

That was the last time Poon saw her.

Aquino managed to get to Toronto Pearson Airport with her documentation--including a negative COVID-19 test, proof the couple had lived together and a specialized document saying she was exempt from the travel restrictions--but when she arrived, a border agent said that she didn’t meet their criteria for a common-law relationship.

She was told to get back on a plane that same day. 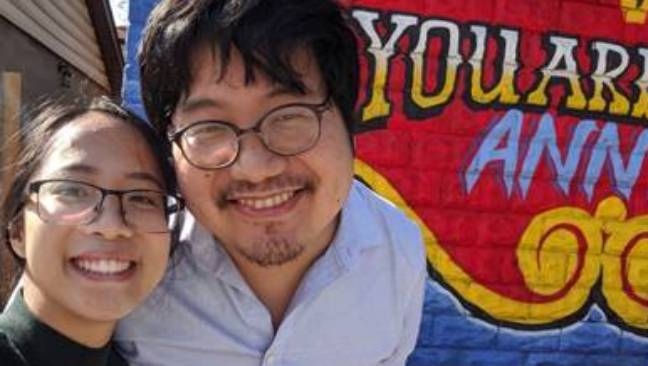 “That broke my heart,” Poon said on the phone, his voice shaking as he added that there are people so much worse off.

“She and I are lucky. I don't, knock on wood, I don't have cancer. She's not a breastfeeding mother. But so many people are. And that's why she and I co-founded ‘Advocacy for Family Reunification at the Canadian Border,’ because this is wrong.”

He mentioned the case of Sarah Campbell, who lives in Stratford, Ont. and was diagnosed with thyroid cancer. Her fiancé is a citizen of the United Kingdom and Poon said he has been denied an exemption to go see her.

Campbell, who as a Canadian citizen, could travel to the U.K. under federal rules but is stuck in Canada while she undergoes treatment. She had surgery last week.

Poon made it clear that the advocacy group does not want to open up borders to non-essential or “discretionary” travel. They just want to change the exemptions, with added public health measures in place, to ensure safe reunification of families.

“Our motto is: ‘We are not asking for open borders, we are just asking to come together,’” Poon said.

The group’s policy proposal, entitled “Love is not Tourism,” hinges on four specific changes that would allow foreign nationals to reunite with their families in a way that is both safe and accessible. Following the expansion of the definition of immediate family member, they propose the following:

The policy proposal argues that the current exemptions are discriminatory based on marital status and that the mandated 14-day quarantine period may not be feasible for many due to their economic situations or familial responsibilities.

Poon said he has heard very little from the federal government about his proposal, despite the fact that they have an official petition signed by 5,338 Canadian citizens or permanent residents expected to be presented to the House of Commons this week.

Is the plan safe?

The policy proposal was created in consultation with Toronto epidemiologist and assistant professor at University of Toronto's Faculty of Information Colin Furness.

Furness said the proposal put forward by Poon “is very sound,” adding that there is always going to be an element of risk when crossing a border amid the pandemic.

“I think it's a big blind spot,” he said of the government’s limited family exemptions. “I don't think anyone made a conscious decision that non-common law spouses … can't reunite, I really think they fell through the cracks.”

“I'm not going to say travel is safe,” he added. “But it's not for me to say that family shouldn't be reunited.”

The idea of having the Canadian family member sign a legally-binding document attesting to their relationship and taking responsibility that the visitor will follow quarantine rules is a game changer, Furness argued, and should encourage legitimate travel. He also added that the changes to the quarantine rules—allowing a foreign national to leave the country earlier than 15 days while the Canadian family remains in self-isolation—doesn’t seem like “a dilution” of the current policy and “maintains the spirit of what the 14 days is supposed to do.”

THREAD: Reminder that Advocacy for Family Reunification at the Canadian Border advocates for committed couples + adult children of Canadians to be added into the border exemptions. We are NOT asking for open borders. We are just asking to be together. @BillBlair @PattyHajdu

The ban on non-essential travel between Canada and the United States was first introduced in March and has been continuously extended every month. The previous extension expires on Aug. 21.

Furness said that because the Canadian government is deciding to keep borders closed on a month-to-month basis, they may not be looking at the long-term ramifications of keeping the border closed.

“If you're thinking that way, you don't need to make provisions for separated families because it's only going to be a month or more,” he said. “ But the reality, the unspoken reality, is that this is going to be a year or more. And when you have that kind of timeline, you need to start thinking about hardship, hardship from separation.”

Decisions made ‘at the discretion of the border services officer’

According to a CBSA spokesperson, the final decision of whether or not someone’s reason for crossing the border is “non-discretionary” or whether a relationship is considered common-law, is “made by a border services officer at the port of entry with the information presented upon time of entry to Canada.

“We recognize that these are difficult situations for some, however these are unprecedented times, and the measures imposed were done so in light of potential public health risks and to help reduce and manage the number of foreign travel-related cases of COVID-19,” Rebecca Purdy said. 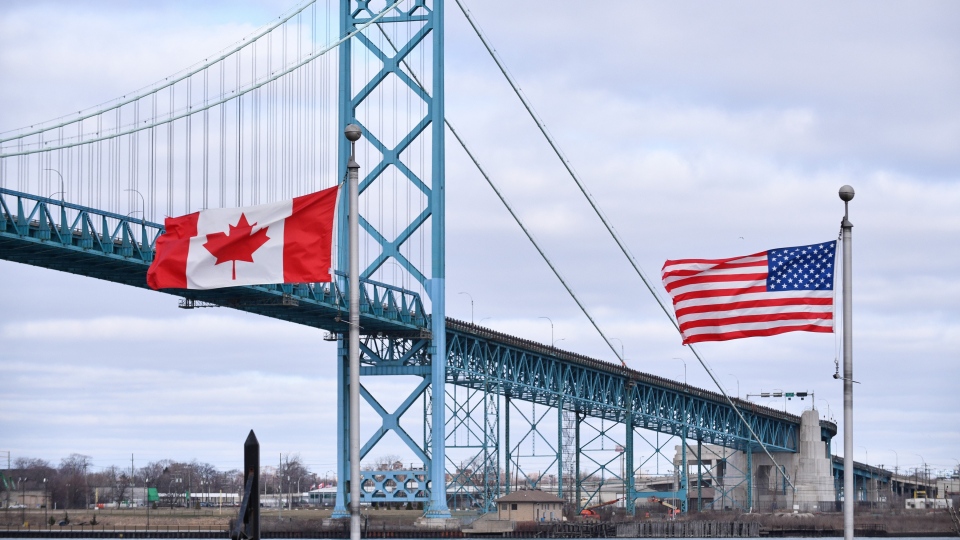 Examples of non-discretionary travel provided by Purdy include economic services and supply chains, critical infrastructure and health supports, safety and security, the safety of an individual or family, and “other activities at the discretion of the border services officer.”

For those claiming they are in a common-law relationship, the onus is on the traveller to provide proof such as a joint lease, shared utility bills or other official documents with the same place of residence listed.

The inconsistency and lack of clarity in terms of the family exemptions is why Goldman’s brother hasn’t simply shown up at the border in an attempt to come into Canada—although it’s not something they are ruling out.

“Basically, they say, ‘well it’s up to the border agent,’” Goldman said. “If you get a compassionate one, you get through. If you get a, you know, a hard-ass one, you're not.”

“We're about to put together the whole package for him because he has to come to the border with all the documentation proving his family.”

Poon said that not everyone can afford to try their hand at crossing the border, especially those who have to take a plane to get into the country.

“If flying in from anywhere else in the world you're spending $1,000 to gamble at the border and that is completely inappropriate and is completely inequitable to those who do not have the financial resources.”