Alleged thief tracked down by Durham police dog in cornfield 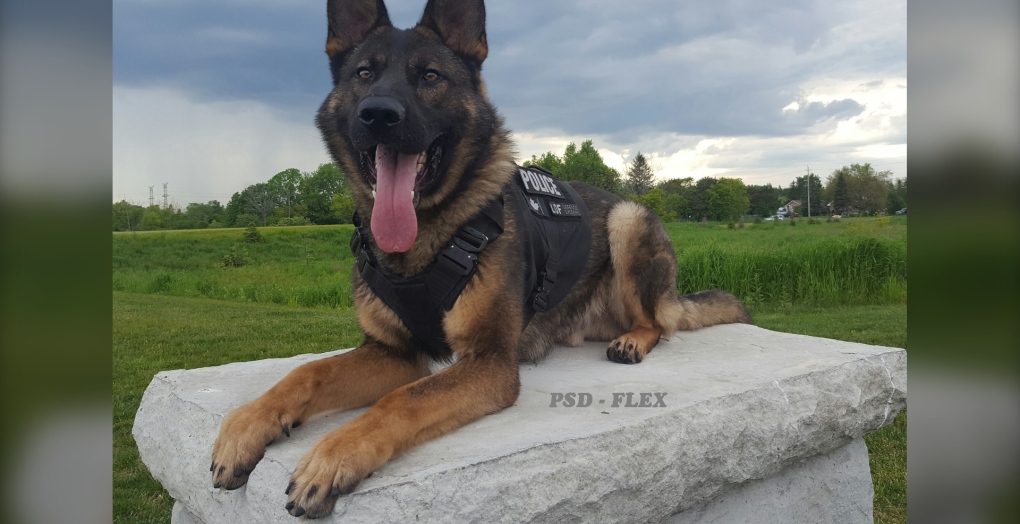 A Durham police dog named Flex helped officers track down a suspect after a home was broken into in Clarington. (Durham Regional Police)

A 27-year-old man has been charged after a suspect allegedly broke into a residence in Clarington and fled into a nearby cornfield—where he was tracked down by a Durham police dog.

Officers were called to a home on Trulls Road, South of Taunton Road, around 9 a.m. for reports of a break-and-enter.

According to investigators, the homeowner woke up and found an unknown male inside his home.

“The homeowner gave chase and saw a second suspect running away from his garden shed,” police said in a news release issued Monday. “The homeowner lost sight of the first suspect in a nearby cornfield.”

Two K-9 teams were called to the scene and a police dog named Flex followed a scent through what has been described by police as “dense cornfield” in rainy conditions. Flex found the suspect hiding in the field around 9:35 p.m.

The suspect sustained a minor bite wound during the arrest, police said, and was taken to the hospital for treatment.

Investigators found several gardening tools that were allegedly stolen from a shed on the Clarington property, as well as items taken from cars in the area.

Whitby resident Emmanuel Yihun is facing 30 charges in connection with the incident, including breaking and entering with intent, theft under $5,000, failing to comply with probation and possession of property obtained by crime.

He has been held for a bail hearing.

Investigators later determined that Yihun was also wanted in connection with thefts at three LCBO outlets in Oshawa.

The second suspect has been described by investigators as a white male between the ages of 20 and 30. He has a skinny build and is about five-foot-eight with long dark hair. Police said he was last seen wearing a brown T-shirt and dirty pants.