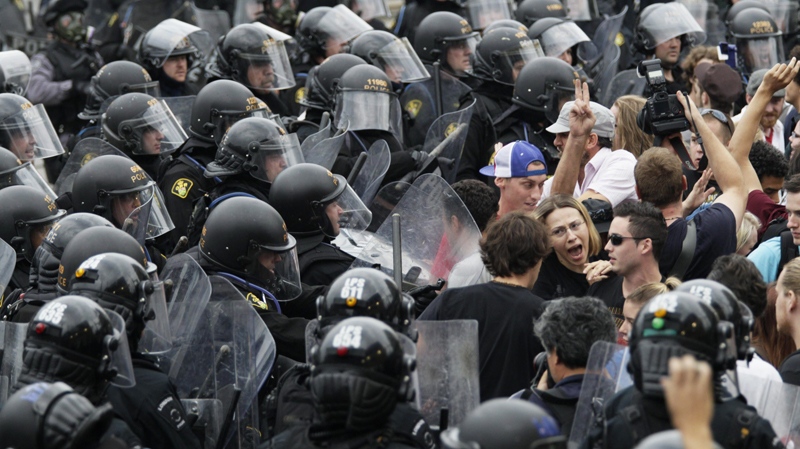 TORONTO - One of the four alleged ringleaders of riots that rocked downtown Toronto during last month's G20 summit is out on bail.

Amanda Hiscocks will live under house arrest at her sister's residence in Ottawa and will continue to make required court appearances in Toronto.

Justice of the peace Mark Conacher granted her bail Tuesday of $140,000.

Hiscocks faces charges of conspiracy to assault and obstruct police and mischief.

Hiscocks, Alex Hundert, Lea Henderson and Peter Hupperton are accused of having organizing roles in riots that caused thousands of dollars worth of damage over the G20 weekend.

Police allege they are active members of the Southern Ontario Anarchist Resistance.

Toronto police meanwhile released the name of another person wanted in connection with G20 violence. Stephen Caswell, 30, of Toronto -- who is alleged to have damaged a police car -- is wanted for mischief over $5,000.

Also Wednesday, police say they arrested Matthew McDonald, 33, of Toronto, and charged him with mischief under $5,000 and failure to comply with probation. Police allege McDonald caused damage to a police car.

Hiscocks is a prominent social activist in Guelph, Ont., and has been battling various charges related to protests over the past years.

She has been out on bail from a pending trial in Guelph on charges of arson and mischief following the burning of a barricade that took place in November 2008.

Early in 2010 she went and participated in protests and demonstrations in Vancouver related to the Olympic Games, resulting into a charge of failing to comply with bail conditions.

Outside the court during the bail hearing process Monday, one of Hiscocks' supporters described her as a peaceful and hardworking activist.

"I think she is against larger violence that has happened in the world and is committed to building healthy communities," said Cory Legassic, a Montreal-based social activist who's known Hiscocks for the past 10 years.

"There is definitely a deep respect for her commitment and her hard work and her political views as well."

More than 1,000 people were arrested following the mayhem in downtown Toronto during the G20 summit, when so-called Black Bloc tactics were used by some protesters to smash windows and set police cruisers on fire.

Hiscocks will be back in court Aug. 23.