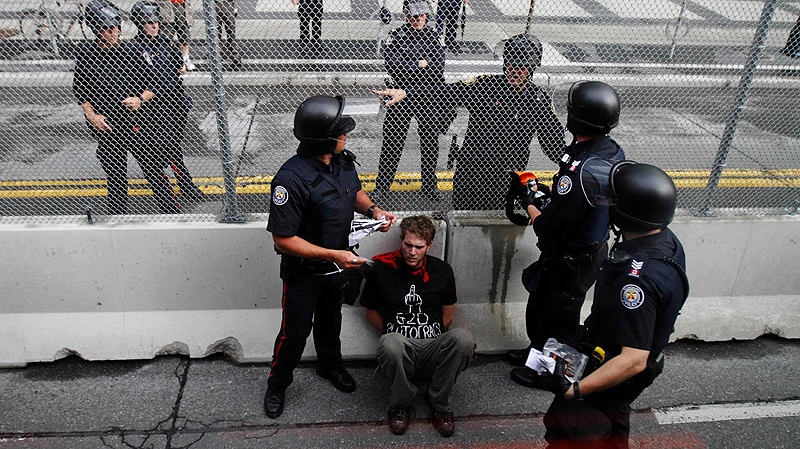 A demonstrator is arrested by Canadian police officers near the fence that surrounds the G20 Summit venue in Toronto, Canada, Saturday June 26, 2010. (AP Photo/Lefteris Pitarakis)

TORONTO - An Ontario judge is giving two alleged G20 protest ringleaders and the Crown a chance to clarify a bail restriction banning the pair from public demonstrations.

Alex Hundert and Amanda Hiscocks are charged with conspiring to organize riots and vandalism at last year's summit.

Police arrested them in a pre-dawn raid hours before the event began in June 2010.

One of their bail conditions bars them from participating in a protest or public demonstration -- a restriction they are challenging in Superior Court.

The accused are not seeking to have the term lifted, but today asked Justice Bonnie Croll to define what the word demonstration means.

Croll put off the start of arguments for a week, saying the accused and Crown should first try to clarify the "no demonstration" wording outside court.

Hundert was charged with violating his bail after speaking last September at a G20 discussion panel at a Toronto university.

"The Crown has alleged and a court lower than this one has agreed that a public demonstration is any public meeting where any political views are expressed," Hundert said outside court. "And we think that's utterly preposterous."

Hiscocks said the restriction stops her from attending any event where people air their political views.

"I don't have a voice," she said. "I can't even go to a place where somebody else has a voice."