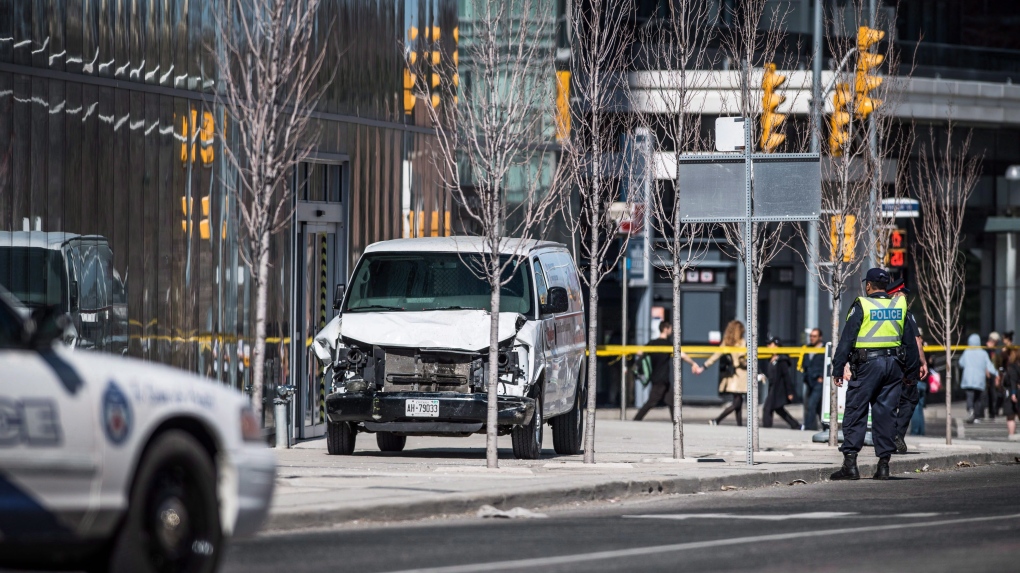 Despite not achieving his goal on April 23, 2018, Alek Minassian told Dr. Percy Wright, a forensic psychologist based at the Centre for Addiction and Mental Health, that he felt "very happy and excited" people were talking about what he had done.

The psychologist said Minassian told him if he killed 100 people, he would be atop an online leaderboard of mass killers that he looked at often.

"He stated despite not meeting his goal of 100, he was satisfied with a count of 10 and he 'had not wasted anything, I was effective enough,"' Wright wrote in his report, part of which was read out at Minassian's trial.

Minassian has pleaded not guilty to 10 counts of first-degree murder and 16 counts of attempted murder.

The defence argues that the 28-year-old from Richmond Hill, Ont., should be held not criminally responsible for his actions due to autism spectrum disorder.

Minassian's state of mind is the sole issue at trial as he has admitted to planning and carrying out the attack.

Court has heard that Minassian wanted to commit his attack downtown, but became nervous while at a red light at Yonge Street and Finch Avenue in the city's north end.

That's where he began his attack, driving the van through a group of people on the sidewalk of that intersection, killing two.

"He said if his kill count was high, he would not be viewed as a failure or a screwup that never got promoted and thought of as weird," Wright wrote in his report.

"He stated that rather than die in obscurity as a weird person he would be a celebrity of sorts."

Wright interviewed Minassian on four occasions in the fall of 2019, meeting for about 10 hours in total the Toronto South Detention Centre.

The psychologist testified Tuesday that Minassian had anger issues and knew right from wrong.

Minassian said he wanted to shoot up his high school and kill people who bullied him and spare those he liked, court has heard. But he never went through with it, in part, because he didn't know how to get a gun, the trial has heard.

Wright said Minassian fantasized about school shootings to work through his anger.

But Minassian's thought process shifted a bit in 2018, Wright said.

"It became more of an emphasis on leaving his mark in history and not being known as someone completely ineffectual," Wright said.

He said Minassian's autism spectrum disorder was a factor in why Minassian committed the attack.

"One of the real tragedies of having a mental disorder is it can be a real burden to bear and can contribute to an offence, but it doesn't necessarily rob you of the ability to know what's wrong," Wright said.

The trial previously heard from a psychiatrist testifying for the defence that Minassian lacks empathy and does not understand the moral wrongfulness of killing 10 people.

Dr. Alexander Westphal said, however, that a finding of criminal responsibility is a legal matter rather than a psychiatric one.

Another forensic psychiatrist has said Minassian did not meet the test to be found not criminally responsible.

This report by The Canadian Press was first published Dec. 9, 2020.