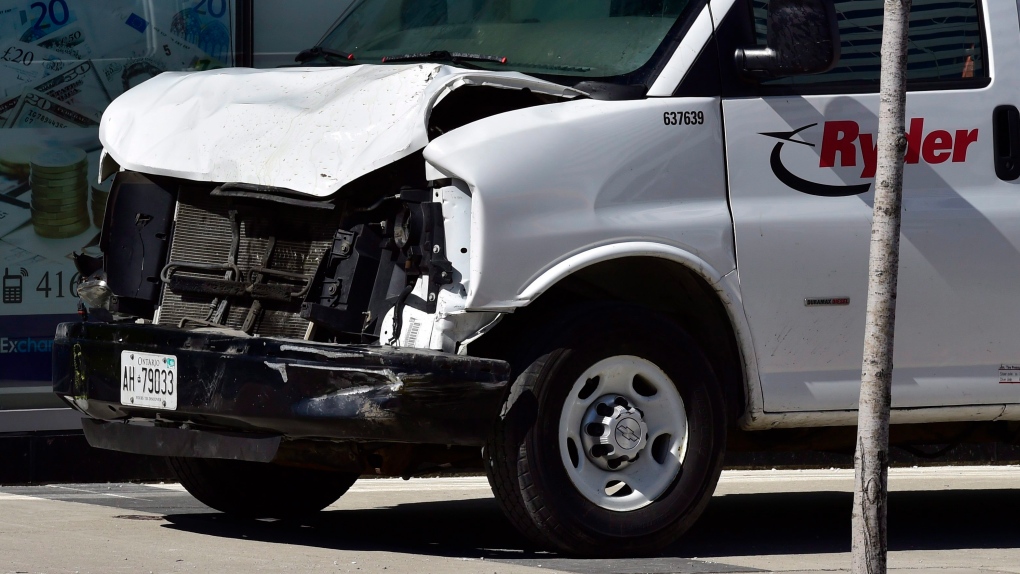 A van with a damaged front-end is shown on a sidewalk after a van mounted a sidewalk crashing into a number of pedestrians in Toronto on Monday, April 23, 2018. THE CANADIAN PRESS/Frank Gunn

TORONTO -- A psychologist testifying for the prosecution says the man who killed 10 people in Toronto's van attack is capable of moral reasoning and understands other people's thoughts and feelings.

Dr. Percy Wright has painted a starkly different picture of Alek Minassian than an American psychiatrist who testified for the defence.

Dr. Alexander Westphal testified that Minassian lacks empathy and does not understand the moral wrongfulness of killing 10 people, but said a finding of criminal responsibility is a legal matter rather than a psychiatric one.

Minassian has pleaded not guilty to 10 counts of first-degree murder and 16 of attempted murder.

The defence argues Minassian should be found not criminally responsible for his actions on April 23, 2018, due to autism spectrum disorder.

Minassian has admitted to planning and carrying out the attack, which leaves his state of mind at the time the sole issue at trial.

Wright said he conducted a battery of psychological tests with Minassian. He said Minassian scored average-to-above average compared to the general population -- and much higher compared to those with autism spectrum disorder -- on all the tests.

"He can think non-literally, can think outside the box and not as concrete as you would expect someone with autism spectrum disorder," Wright said.

He said Minassian is very hard on himself.

"He is quite haunted by his sense that he has failed academically, struggled with procrastination and really is quite a harsh self critic as opposed to a lot of individuals with autism spectrum disorder.

Minassian scored slightly above average for anger, but was able to keep his anger hidden.

"I want to be clear these scores are not extremely elevated, and do not match up well with the eventually tragic outcome here," Wright said.

He said Minassian was a very introverted person who was anxious and socially avoidant, and who "doesn't have a lot of positive emotional experiences."

The defence closed its case earlier Tuesday after seven days of testimony from Westphal, a forensic psychiatrist.

Westphal testified that Minassian lacked the so-called theory of mind, or the ability to take the perspective of other people and to understand others have different thoughts and feelings than their own.

Wright, however, said Minassian demonstrated the theory of mind quite capably, the only unusual aspect to Minassian's thought processes is that he took a long time to answer some questions.

Wright said he administered one test that focused on dating and interactions between men and women. It is an area of socialization that is difficult for many with autism spectrum disorder, he said, who have trouble picking up on social cues.

An example of a problem put to Minassian is whether a man gave an overture towards a woman either too early or too late, he explained.

"It was one of the more telling tests for me in terms of watching him, especially given the time to figure it out -- which, to his credit, he likes to spend time, likes to figure things out -- how much theory of mind he actually demonstrated," Wright said.

"He obviously doesn't really have true dating experience, but has thought about it and was able to answer virtually every question right on this test."

Minassian has told several psychiatrists that he was lonely and struggled with women. He has also said one of the reasons he committed the attack was retribution against society for years of rejection by women.

Another psychiatrist previously testified Minassian does not meet the test to be found not criminally responsible.

This report by The Canadian Press was first published Dec. 8, 2020.