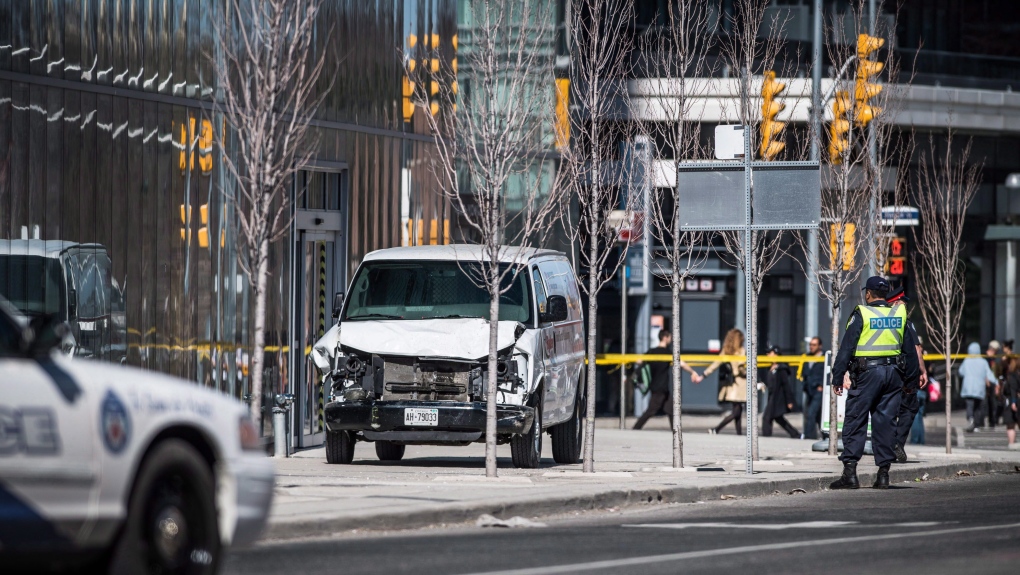 Police are seen near a damaged van in Toronto after a van mounted a sidewalk crashing into a number of pedestrians on Monday, April 23, 2018. Toronto will commemorate the second anniversary of a deadly van attack virtually due to the COVID-19 pandemic. THE CANADIAN PRESS/Aaron Vincent Elkaim

TORONTO -- The man who killed 10 people when he drove a van down a Toronto sidewalk carried out the attack in an attempt to gain notoriety and knew his actions were morally wrong, court heard Friday.

Dr. Scott Woodside, a forensic psychiatrist testifying for the prosecution, said Alek Minassian told him he knew the attack would be viewed by the public as a terrible act.

"In terms of knowledge of moral wrongfulness, he's indicated quite clearly that he knew at the time most people in the community would find his actions despicable and wrong," Woodside said.

The defence argues Minassian, who has pleaded not guilty to 10 counts of first-degree murder and 16 of attempted murder, should be held not criminally responsible for his actions on April 23, 2018, due to autism spectrum disorder.

Minassian has admitted to planning and carrying out the attack, leaving his state of mind at the time the only issue at trial.

The central question in the case is whether the 28-year-old from Richmond Hill, Ont., knew what he did was morally wrong.

The defence argues Minassian did not, due to a deficit in empathy and an inability to understand the damage the attack wrought -- all stemming from his autism spectrum disorder.

But Woodside, who met with Minassian for nearly 12 hours on four occasions in the fall of 2019, said the young man's quest for notoriety makes it clear he knew his actions were morally wrong.

"His partly stated motive to commit these acts was to gain notoriety, to become infamous, which in my view implies a pretty clear knowledge that people are going to view this as a terrible thing," the psychiatrist said.

"It's actually a calculation on his part on what does he need to do to gain the most notoriety, and part of that is to do pretty much the worst thing: kill people and kill as many people as possible."

Woodside said Minassian told him, and others, that he really wanted to commit the attack and had been fantasizing about mass murders for years.

"He's focused on a very egocentric goal, a selfish goal, that he's justified in his head on that combination of motivations that he's described: loneliness, rejection, fear of failure and wanting to leave his mark in life," Woodside said.

"Those end up being more important to him than the pain he's going to cause."

Minassian knew his attack would cause suffering, Woodside said, even if an empathy deficit didn't allow him to feel others' pain and suffering.

"Mr. Minassian absolutely had the capacity to work out the impact on other people," Woodside said.

"He's also said he turned his mind away from those things because they would have constrained him."

Because Minassian has raised a not criminally responsible defence, the onus shifts away from the Crown to prove its case beyond a reasonable doubt.

Minassian's lawyer, Boris Bytensky, is trying to prove on a balance of probabilities that it's more likely than not that Minassian had a mental disorder that impacted his actions to the extent that he didn't understand what he was doing was wrong.

Justice Anne Molloy, who is presiding over the judge-alone trial, has said she believes autism spectrum disorder qualifies as a mental disorder. She will have to decide whether Minassian knew his actions were morally wrong.

Crown attorney Joe Callaghan said the prosecution will still argue that autism spectrum disorder does not qualify as a mental disorder for the purposes of the trial, thereby rendering Minassian criminally responsible for his actions.

Court has also heard Minassian told mental-health assessors that he identified partly with so-called "incels," men who are involuntarily celibate and discuss their hatred for women and those who date them in the bowels of the internet.

Woodside said the fact that Minassian was a virgin and never had a relationship with a woman contributed to him feeling lonely. Reading about incels made him feel better about himself, the psychiatrist said.

Minassian believed tying his attack to the incel movement would increase his notoriety, Woodside said.

Court heard that Minassian composed a message about the "incel rebellion" before the attack. He told a psychiatrist he posted it on Facebook immediately afterward, before he was arrested.

Minassian said his notoriety would be "upgraded" by tying his attack to incels, even though he acknowledged he had no real anger toward women, court heard.

"It was quite calculated, and calculated to generate media interest," Woodside said.

"This was for general consumption and (to) make famous his act."

This report by The Canadian Press was first published Dec. 11, 2020.