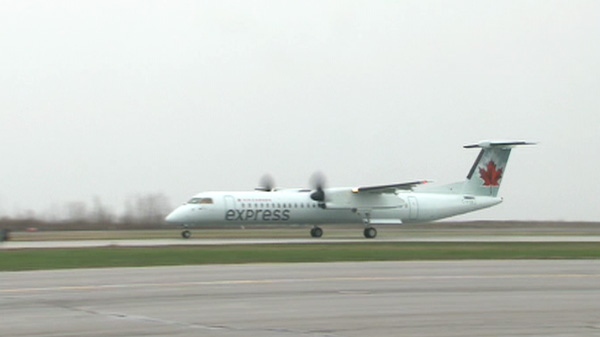 Air Canada will begin to fly out of Billy Bishop Toronto City Centre airport on Sunday, May 1, 2011.

Air Canada will begin to fly out of the Billy Bishop Toronto City Centre airport on Sunday.

The airline said they will schedule about 15 flights from Toronto to Montreal everyday. The flights will take 70 minutes, which is the same amount of time as flying from Toronto's Pearson International airport.

"We're very exited because we know our customers have been looking for this service," said Peter Fitzpatrick, a spokesperson for Air Canada.

The downtown-located Billy Bishop airport has been dominated by Porter Airlines since their launch in 2006.

Porter officials said they welcome the competition from Air Canada as an opportunity to win over their passengers.

Robert Deluce, the CEO of Porter Airlines, said "We have the majority of the flights to Montreal, and I think we'll get our fair share of anything that comes this direction."

Three-quarters of the passengers who use the Billy Bishop airport are business travelers who prefer the convenient access to downtown that the airport offers.

One passenger said, "I think it's great, I'm happy, because now I can fly right into Toronto downtown. I like the option of having the Air Canada flight."

Port Authority officials expect that around 1.5 million customers will use the airport this year, which is up from 1.2 million in 2010.

Geoffrey Wilson, a spokesperson for the Toronto Port Authority, said "It's a great economic jewel for the city of Toronto, having more carriers, more choice, more destinations for the passenger, more services for the passenger."However the members of CommunityAIR, an organization who wants to see the island airport shut down, is not happy about Air Canada adding flights at the airport.

"It's going to be more traffic, more aircrafts, more taxies, more cars dropping people off down here," said Bill Freeman, a spokesperson for the organization.

Freeman says he thinks the airline passengers should be sent back to Toronto's Pearson International airport.