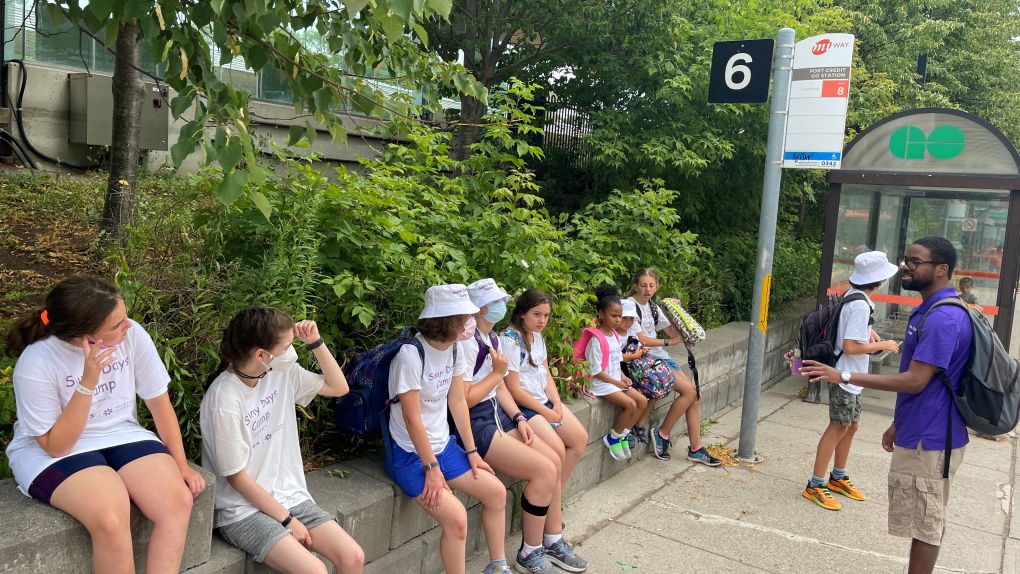 Children participating in Epilepsy South Central Ontario’s Sunny Days camp are shown waiting for a MiWay bus in Mississauga on Aug. 4. One of the organizers of the camp says that the group was accosted by a 'rude' and 'aggressive' driver. (Submitted/CP24,com)

One of the organizers of a summer camp for children with epilepsy says that his group was recently accosted by a “rude” and “aggressive” MiWay bus driver in Mississauga, turning an anticipated outing to a Build-A-Bear workshop into a traumatic experience for some of the kids.

Epilepsy South Central Ontario’s Trevor Gordon tells CP24.com that about 20 kids with the charity’s Sunny Days Camp were taking the bus from Port Credit to the Square One Shopping Centre using discounted tickets offered to school boards and some special needs groups on the morning of Aug. 4.

He said that the camp councillors and the kids arrived at the bus stop a few minutes early to ensure they would have enough time to board.

Gordon said that he was responsible for the tickets and boarded first, handing them to the driver.

Gordon, however, said that the driver quickly turned hostile and began effectively “scolding” him over the use of the discounted tickets, causing one of the children to grab onto his legs.

“He (the driver) stopped me and he was just like ‘What are these? Why do you have these? How did you get these?’ I was trying to defuse the situation and I was just like ‘We are with Epilepsy South Central, this is our Sunny Days Camp, we're heading to Square one for Build-A-Bear and we’re using these special purpose tickets’ and he just said ‘let me see them.’ We had 20 some odd tickets and he made me show each one of them and didn’t let me put them in the machine,” Gordon said. “He was yelling, he was rude, he was being passive aggressive, he was being aggressive, he was rolling his eyes at me. He was just acting like he was offended that we were getting on this bus with tickets which, let’s be honest, save us $2 per rider.”

Gordon said that the driver eventually allowed the children to board but not before spending upwards of five minutes scrutinizing each of the tickets individually.

He said that he is still not sure what prompted the treatment he and the children received but he speculated that it is possible that the driver may have been questioning the legitimacy of the children using the discounted tickets, given that epilepsy is largely “an invisible disease” which often only presents itself during seizures.

“I don't know if it's education on the tickets itself (that is needed) or is it education towards people with not just epilepsy but any condition that you might have that you don't show it? Are you asking for proof of a disease? Like do we need to show our health records as we get on the bus?” he said. “It was just so shocking.”

The City of Mississauga introduced the special purpose tickets program in 2019 as a way to provide discounts to some non-profit groups.

In a statement provided to CP24.com, a spokesperson said that the city has investigated the incident involving members of the Sunny Days camp and taken “corrective action” with the employee to ensure “that expectations regarding professionalism are understood and applied going forward.”

“This should not happen to any of our passengers,” Irene McCutcheon said. “Our aim is to provide consistent and excellent customer service to all riders. All of our operators are expected to be professional and respectful at all times.”

Despite the incident, Gordon said that the kids did end up having a fun outing to Build-A-Bear. He said that while he was hesitant to use the tickets for the return trip he ultimately decided to do so and was warmly welcomed by a different driver, who greeted the kids and offered them transfers.

But he said that he will think twice about using the special purpose ticket program again, given how traumatic the incident ended up being for many of the children, some of whom were riding a city bus for the first time.

“We appreciate the savings because we're a non-profit charitable organization. But we would probably rather pay the $4 cash (fare) across the board than have to deal with that, you know, or even maybe consider renting a school bus to go 15 minutes to Square One,” he said.

The Sunny Days camp is for children between the ages of five and 14 who are living with epilepsy.

About 260,000 Canadians have been diagnosed with the condition.