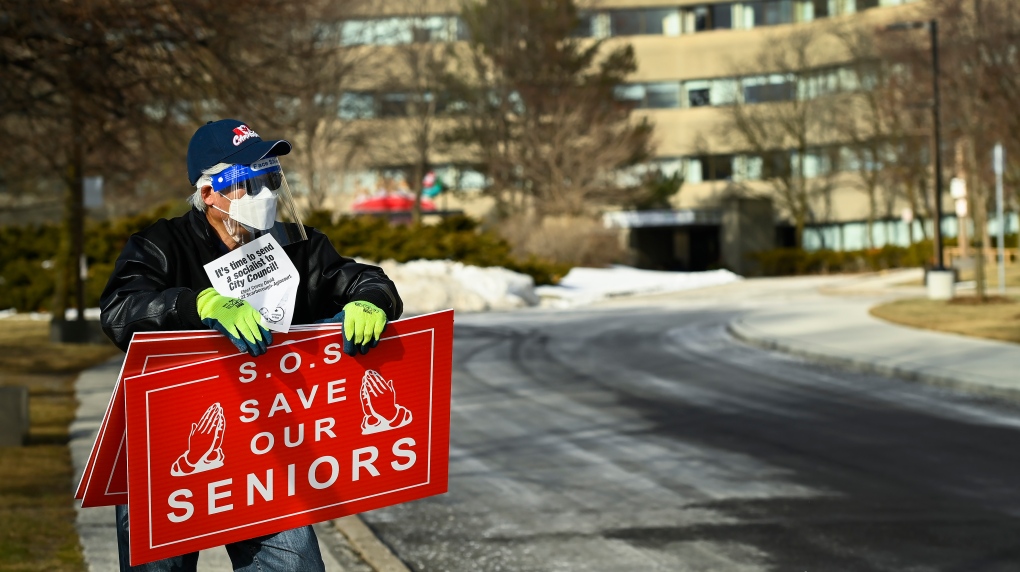 A man protests outside the Tendercare Living Centre long-term-care facility during the COVID-19 pandemic in Scarborough, Ont., on Tuesday, December 29, 2020. This LTC home has been hit hard by the coronavirus during the second wave. THE CANADIAN PRESS/Nathan Denette

TORONTO -- Advocates are calling for a human rights inquiry into systemic discrimination in Ontario's health-care system that allegedly denies and prevents long-term care residents from accessing hospital care amid the COVD-19 pandemic.

The Ontario Health Coalition, along with the Canadian Union of Public Employees and the Advocacy Centre for the Elderly, held a news conference on Tuesday calling for the Ontario Human Rights Commission to use its power to the investigate discriminatory policies.

“In the pandemic, we saw to our utter horror, the worst mass casualty event in our provinces long-term care history,” Natalie Mehra, executive director of the Ontario Health Coalition, said on Tuesday.

“In our view, many of those deaths were avoidable. The policies of denying access to hospital care for the elderly were instrumental in that death toll. The long-standing and terrible inadequacy of care in long-term care was equally instrumental.”

The advocates wrote a 39-page letter to the commission requesting the human rights inquiry into the provincial government’s “long-standing de-hospitalization” and policies, which they claim, hurt and discriminate against the elderly, including cuts to health-care and long-term care since the 1990s.

During the pandemic, hospitals and intensive care units were overwhelmed with COVID-19 patients, but the issue of overcrowding at hospitals has been a long-standing one in Ontario with hospitals forced to treat hundreds of patients in hallways for years.

The letter written by the advocacy groups states that Ontario has 2.2 hospital beds per every 1,000 residents, which is the lowest number in Canada and lower than most states and provinces in developed countries.

They allege that age discrimination occurs often in Ontario as the province tries to cope with “its lack of hospital capacity by denying or restricting the elderly access to hospital care.”

“This has become tragically acute and brutally obvious during the COVID-19 pandemic when the vast majority of long-term care residents critically ill from the virus were not taken to hospital,” the advocates said in a statement on Tuesday.

“Leaving them and thousands more in woefully inadequate long-term care, where nearly 4,000 of them died.”

A University of Toronto and Public Health Ontario study found that one in five, or 22.4 per cent, of long-term care residents who died due to COVID-19 were hospitalized.

In comparison, Mehra said the study found that 81.4 per cent, or four in five people, in the community were hospitalized before they died due to COVID-19.

Health officials with the province have also repeatedly stated that most of the patients in Ontario’s intensive care units are people from the wider community and from not long-term care homes, despite the fact that 3,882 of the province’s 7,173 COVID-19 deaths were residents in these homes.

“There is a systemic ageism in our health system that treats the elderly as though their lives are less meaningful, and as if their right to care is lesser than others,” Mehra said. “The older the resident, the lower the rate of hospitalization.”

A spokesperson for Ontario’s Minister of Long-term Care Merrilee Fullerton wrote in a statement to CTV News Toronto that the government is working to fix the “systemic issues” within the long-term care sector.

“The COVID-19 pandemic has exposed the systemic issues facing long-term care after decades of neglect and underfunding by successive governments,” the spokesperson said on Tuesday. 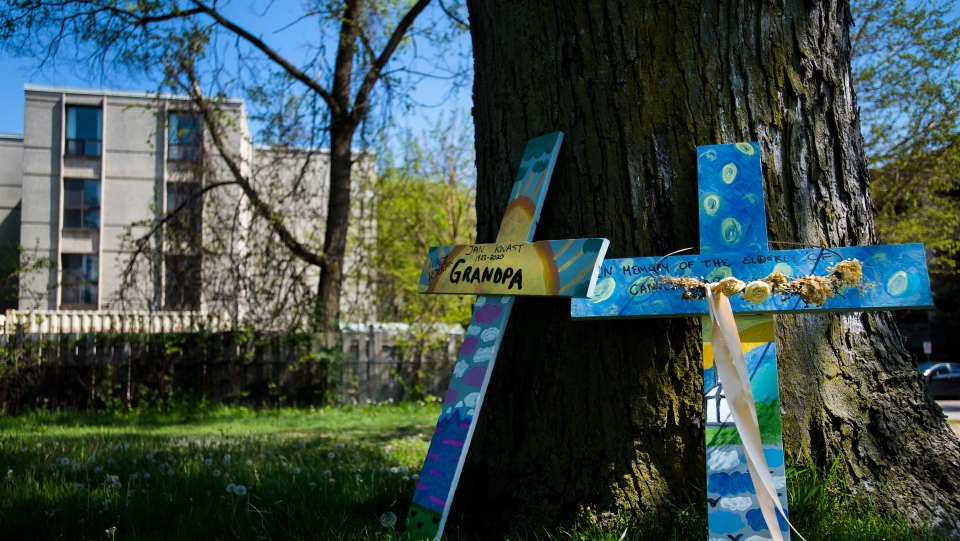 Advocates agree that staffing and capacity issues in long-term care homes have existed long before the pandemic, with hospitals forced to care for elderly patients as long-term care waitlist stretch to the tens of thousands.

Early in the pandemic, Mehra said more than 2,200 of these alternate level of care patients in Ontario hospitals were offloaded to make way for COVID-19 care and patients “deemed to be more important.”

“We've heard from families of loved ones who were moved out of hospitals into long-term care homes with COVID outbreaks during the pandemic,” Mehra said.

She said she spoke to a man this past weekend whose mother was discharged from hospital and moved into a long-term care home in outbreak.

“They asked whether their mom would be safe before she was discharged and they were told she'd be okay,” Mehra said. “She contracted COVID-19 and died within three weeks of being discharged.”

“She was left alone in her room the entire time without family. She was never given the option to go to the hospital, even when she was sick and dying.”

Michael Hurley, the president of the Ontario Council of Hospital Unions, said on Tuesday that he fears discrimination against elderly patients in the health-care sector will only increase.

He said that in addition to the human rights commission’s inquiry, advocates are also calling on the Ontario government to “immediately correct the legacies of discriminatory policies.”

“Ageism, rationing and the infantilization of the elderly resulted in pain and suffering and neglect of health-care conditions, which would be dealt with urgently in a younger person,” Hurley said.

“During the pandemic this discrimination needlessly killed thousands in our direct care by denying them access to hospitalization to preserve hospital beds and ICUs for younger Ontarians.”

He added that he is also calling on the federal government to provide more health-care and long-term care funding for Ontario.