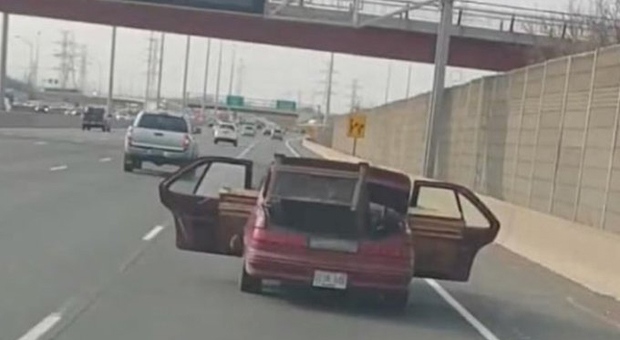 Police have laid charges against a Hamilton man who police allege was spotted driving down the QEW with metal sticking out of the car's open rear doors. (Twitter/ OPP Sgt. Kerry Schmidt)

Additional charges have been laid in connection with an online video, connected to a Hamilton break and enter, that shows a vehicle driving along the Queen Elizabeth Way with its doors and trunk wide open.

The video was initially brought to the attention of Hamilton police on May 7 as detectives were investigating a series of break-ins in the city.

In the video, pieces of metal appear to be sticking out of the side of the vehicle, which has its doors and trunk open.

After reviewing the footage, detectives linked the vehicle in the video to a break-in investigation that began on April 13. Surveillance video footage captured a male and female prying a gate to a commercial business open and driving around the compound on Brockley Drive.

Police said that about $3,000 worth of bulk steel was stolen at the time.

Police attended an address on Bow Valley Drive, near Queenston and Gray roads, where they seized a 1991 red Chevrolet Lumina after seeing the video.

Two suspects, who police identified as Nicole Farr, 42, and Christopher Cielecki, 42, were each charged with one count of break and enter.

Ontario Provincial Police Sgt. Kerry Schmidt said at the time that the video was “absurd” and that the suspects would most likely face Highway Traffic Act charges.

On Wednesday, Schmidt said that Cielecki had been charged with mischief endangering life, careless driving, insecure load, and driving while under suspension.

Cielecki is scheduled to appear in court in June, Schmidt said.