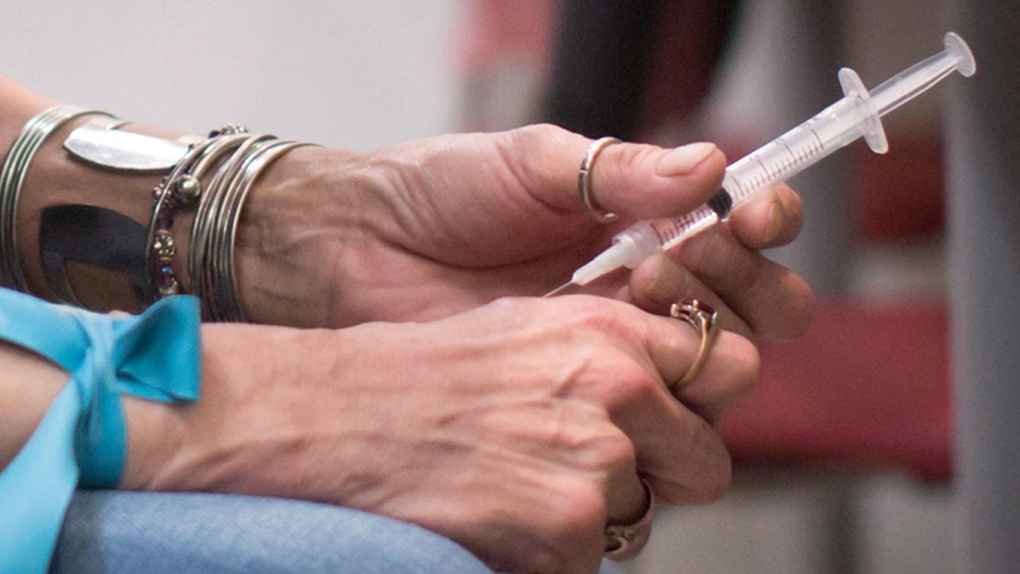 A person injects hydromorphone at the Providence Health Care Crosstown Clinic in the Downtown Eastside of Vancouver, B.C., on Wednesday April 6, 2016.&nbsp;Ontario's doctors have reached a deal with the province over how much addictions doctors will be paid for virtual care after the physicians raised an outcry over previously planned changes would have put 30,000 patients at risk of losing lifesaving opioid treatments, The Canadian Press has learned.&nbsp;&nbsp;THE CANADIAN PRESS/Darryl Dyck

Ontario's doctors have reached a deal with the province over how much addictions physicians will be paid for virtual care after they raised an outcry over previously planned changes they said would have put 30,000 patients at risk of losing lifesaving opioid treatments, The Canadian Press has learned.

Details of the deal were not available but an internal email from the Ontario Medical Association -- which represents the province' doctors -- to addictions physicians said the agreement would resolve concerns that a drastic cut in funding for virtual care could leave patients without access to treatment.

"An agreement in principle between the Ministry and the OMA bargaining teams has been reached," Dr. Chris Cavacuiti, who leads the OMA's addictions section, wrote in the email sent late last week that was obtained by The Canadian Press.

"The final outcome will result in the status quo for our practices in terms of delivering and billing for video services."

The issue arose after the Ministry of Health and the OMA, which represents the province's doctors, reached a "physicians services agreement" in February, part of which dealt with upcoming changes to Ontario's virtual care program.

At the time, both sides agreed to hammer out details on lingering issues, one of which was the unintended consequences of the changes.

The changes were to take effect Oct. 1 but were delayed to Dec 1. because the province could not make the necessary computer system changes in time.

They argued that meant many physicians may no longer be able to afford to provide treatment for those needing certain opioid therapies.

The doctors emphasized that the main issue was many in the field rely heavily on treating hard-to-reach patients through virtual means, particularly for opioid agonist therapy that involves getting patients on methadone and buprenorphine treatments, which help curb relapses and avoid overdoses.

There are about 600 addictions doctors who specialize in that therapy -- about 200 of them use virtual care.

Internal Ontario Medical Association emails and documents obtained by The Canadian Press show that by early September, the province refused to make any exceptions to the physician services agreement for addictions doctors,

"The OMA has repeatedly advised the ministry that proceeding with (the physician services agreement) implementation as scheduled, without addressing these unintended consequences, would adversely affect access to equitable health care and the well-being of several vulnerable cohorts of Ontarians," association board chair Dr. Cathy Faulds wrote in an email on Sept. 7 to members.

Addictions section head Cavacuiti, who declined to comment when contacted, wrote on Sept. 20 to his colleagues saying that the changes meant about 30,000 patients who rely on virtual care for opioid agonist therapies were at risk of losing to the treatments.

The OMA did not provide specifics on the new deal reached with the province, saying that "discussions and the implementation of the ratified agreement continue."

"Continued access to high quality addiction medicine services has always been a priority and by working together through the implementation process we are confident there won't be any interruption in these needed services," it wrote in a statement.

A spokesperson for the Ministry of Health did not comment specifically on the deal but said "all medically necessary virtual care services, including initial patient visits by telephone, will continue to be insured under OHIP."

The issues raised by the addictions doctors came as the province works to change how and what doctors can bill for in virtual care. Some of those changes include lowering payments to doctors for virtual appointments and incentivizing in-person rules around linking patients with a doctor.

The tensions between the addictions doctors and the government also arose as opioids continue to ravage the province.

More Ontarians have died from opioids each year since 2011, according to data from the Office of the Chief Coroner. Overall, the mortality rate for opioid toxicity more than doubled between 2017 and 2021, when 2,883 people died, or about eight people per day.

Some addictions doctors said word of a deal on virtual care was welcome.

"It's definitely a relief," said Dr. Nikki Bozinoff, an addictions physician at the Centre for Addiction and Mental Health in Toronto.

Addictions doctors have long pioneered virtual care, especially through the phone, to treat those who are dependent on opioids, she said. It especially helps to reach those who do not have a home or live in a shelter and other vulnerable populations.

"There's existing data from the U.S. for example, that telephone visits, or virtual care more broadly, led to improved retention in treatment and significant decreases in overdoses," she said. "We need to expand this way of delivering care."

Dr. Meldon Kahan, medical director of META:PHI, a clinic that helps patients with addictions, said he was ecstatic at the news.

"I'm very happy at this outcome," he said. "But it caused a lot of stress and uncertainty and it looked like a lot patients were being left out in the cold."

This report by The Canadian Press was first published Oct. 6, 2022.

Actress Kirstie Alley has died after a brief battle with cancer, her children True and Lillie Parker announced on her social media.