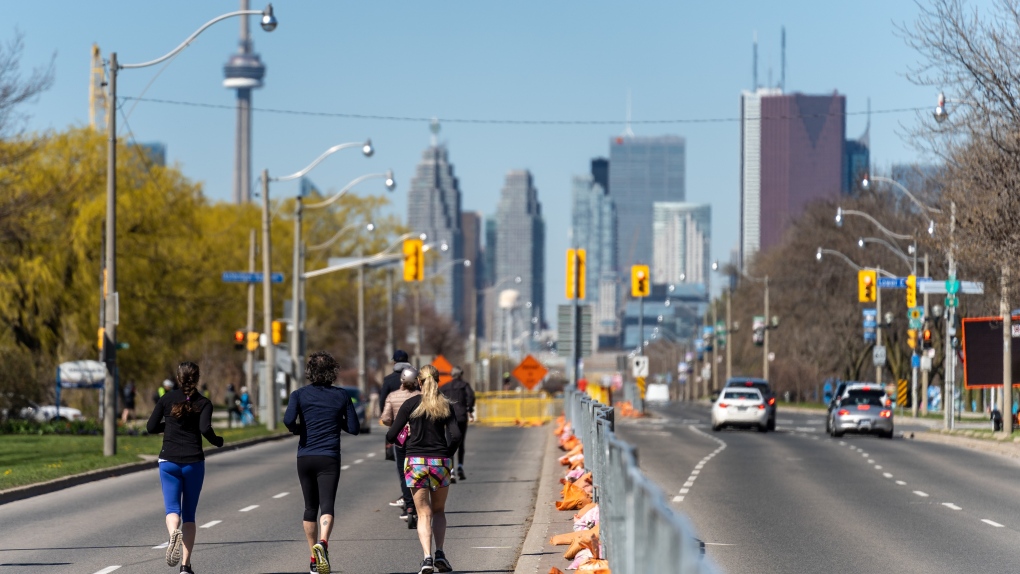 A group of runners run along Lake Shore Blvd. East as road closures come into effect for the return of the ActiveTO program in Toronto on Saturday, May 1, 2021.THE CANADIAN PRESS/Yader Guzman

TORONTO -- Pedestrians and cyclists will be able to take over Lake Shore Boulevard West this weekend as ActiveTO returns to the major artery in the city.

The program returned to Toronto on May 1 but this weekend will be the first where Lake Shore Boulevard West is shut down.

This weekend, road closures will also be in place along Lake Shore Boulevard East, Bayview Avenue and in High Park.

“By opening Lake Shore Boulevard West this weekend for people to be active, the City is taking advantage of lower than usual traffic volumes while the provincial Stay-at-Home order is in effect,” city officials said in a press release on Wednesday.

The provincewide stay-at-home order went into effect on Apr. 8 and is set to expire on May 20.

Residents are urged to stay home unless they have to leave for essential reasons, including going to work, medical appointments, buying groceries and exercising.

City staff said they are planning an ActiveTO weekend road closure on Allen Road on June 5 and are reviewing possible weekend closures along Black Creek Drive and roads within the Exhibition Place.

Last summer, an average of 18,000 cyclists and 4,000 pedestrians participated in ActiveTO on Lake Shore Boulevard West on days without significant rainfall, according to city data.