'A lost art': Team of instructors bring sewing back to GTA schools

TORONTO -- A group of instructors is trying to bring sewing back to schools across the Greater Toronto Area and, at the same time, break down barriers and stereotypes in the process.

The Denise Wild's Sewing Studio program works in various schools, and is comprised of a group of people from numerous backgrounds, including former professional athletes.

“You know people often think that sewing is just for your grandmother, but lots of people can sew,” Roland Acheampong, the program’s co-founder told CTV News Toronto.

“We offer quite an amazing program that focuses on building confidence, and using sewing as a tool to accomplish that.”

Co-founder Denise Wild said that several of the kids have never seen a sewing machine before.

“They’ve never touched a sewing machine, they don’t even know what it does,” she said. 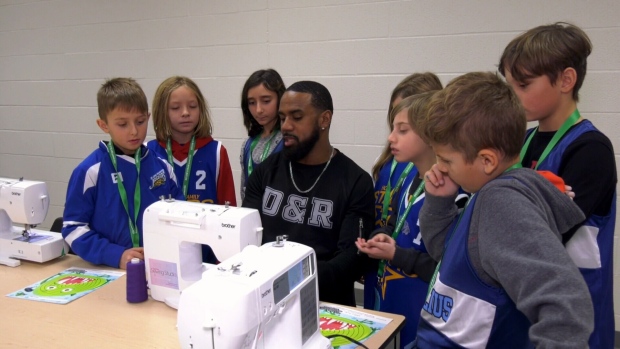 Wild said the program aims to show the kids everything they’re able to accomplish, to help build their self-esteem and their sense of self efficacy.

“We’re trying to make kids feel good about themselves … all using a sewing machine.”

Acheampong and Wild have a team of instructors that help the students learn how to operate a sewing machine with an in-school program. The instructors all come from diverse backgrounds.

“They see big guys with tattoos and stuff like that and they didn’t realize that we could sew,” Sonny Ade, one of the instructors, told CTV News Toronto.

“When they see that we make certain things, it really emboldens them and makes them know that they can do things as well.”

Breaking stereotypes is one of the other main goals of the program, Wild said. 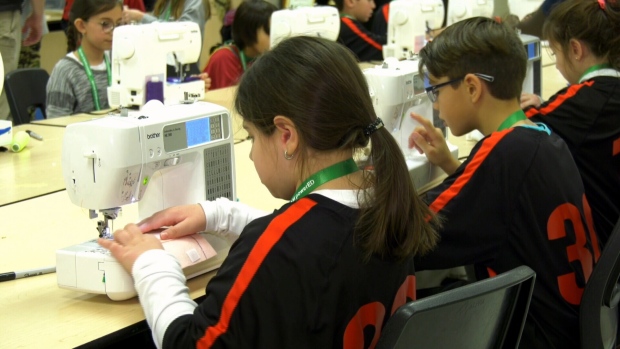 “People have this idea in their head of what a sewer would be, who a sewer looks like, what a sewing class would look like,” Wild said. “So we’re trying to crush that stereotype.”

The instructors have been making their way through GTA schools, and they donate a sewing machine to every school they visit so that the kids can keep practicing.

“It’s fun because I could help my mom when I’m at my house if my pants have like a hole in the knee,” Grade 4 student Josh told CTV News Toronto after he completed the program.

A second Grade 4 student, Madison, said that the class helped her become more creative, and also helped her mind to “relax.”

The sewing studio hopes to keep the momentum going. They already have visits to schools on their schedule almost every day.

“We’re the only company in Canada that’s doing anything remotely close to what we’re doing,” Acheampong said.

“We’re making sewing cool, we’re bringing back a lost art, and we’re having lots of fun doing it.”