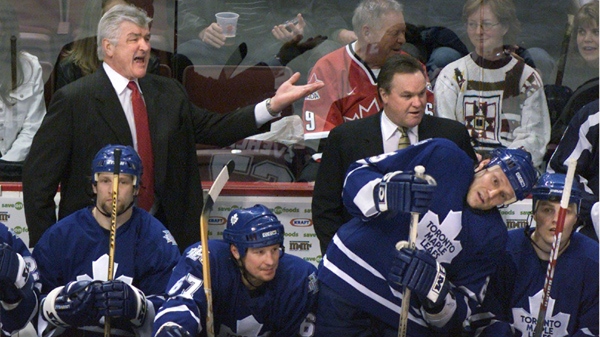 Toronto Maple Leafs GM and coach Pat Quinn, left, shows his displeasure with the referee as he stands beside assistant coach Rick Ley during NHL action against the Vancouver Canucks in Vancouver Saturday, March 16, 2003. (Chuck Stoody / THE CANADIAN PRESS)

When it comes to success in professional sports, no major North American city fared as poorly as Toronto did in the 2000s. Five major pro sports teams and only one lousy championship to show for it -- and that was the Argonauts in 2004, in a league where every team had a one in nine shot of winning the Grey Cup.

To recap the 2000s for cities of similar size:

Okay Montreal, stop laughing, at least we still have a baseball team.

So, how did we get to here? Are our athletes involved in vast conspiracy because they hate the idea of parading up Yonge St? Are the lights of Dundas Square that ugly?

Unfortunately, the answer is a bit more typical -- bad management, questionable ownership, and you, the Toronto sports fan -- a fanbase that wants a winner now and hates a rebuild.

And now, a look back at a decade to forget.

The Leafs add another ten years to the '67 curse

The early 2000s didn't feel like it at the time, but they were the highlight of the decade for this sorry franchise.

The 1999-2000 season was the first time the Leafs reached 100 points in the regular season, although they bowed out in the second round of the playoffs, as they did the following year. The 2001-2002 season turned out to be the Leafs' best of the century thus far, with the team losing in the conference final to the Carolina Hurricanes.

Heroically, coach and steak lover Pat Quinn went to the hospital with heart problems in an attempt to rally his team that playoff series, but there was no Bill Barilko to complete that particular storybook ending.

Quinn did get thinner though, so the effort wasn't completely in vain.

The initial years of the new millennium were led by the combination of all-star Mats Sundin, random 20-goal scorers (yeah, I'm talking about you, Sergei Berezin and Darcy Tucker), the rise of Tomas Kaberle on defence and steady-to-pretty good goaltending by Curtis Joseph. And Tie Domi's iron forehead.

Quinn was both the coach and the general manager in those heady days, and while it's hard to deny his ability behind the bench, at least with veteran players, his skills as a GM would define mediocrity.

In the PC-era (pre-cap), with near unlimited cash, he would sign past-their prime players (Alexander Mogilny, Mikeal Renberg) and refuse to give young guys a chance. He lost Steve Sullivan to the waiver wire and at the 2003 trade deadline, moved Alyn McCauley, future 40-goal scorer Brad Boyes and a 1st round pick to the San Jose Sharks for the oft-injured Owen Nolan.

By 2003, Quinn was out as GM, and 34-year-old, John Ferguson Jr, was brought in. Quinn was kept as coach and would get fired a few years later because, shocker, he didn't get along with the kid that took his job.

2003-2004 would see the Leafs garner a team-record 103 points, and once again, fade away in the playoffs, despite the legion of 1990s all-stars they brought in (Brian Leetch, Joe Nieuwendyk, Ed Belfour, etc.)

And Ferguson, simply, was the worst thing to happen to the franchise this decade, besides the salary cap.

With the 2004-2005 season lost to the lockout, and the salary cap implemented, the wealthy Leafs were no longer able to buy themselves into the first round of the playoffs. They tried though, bringing in has-beens such as Eric Lindros and the tortoise-like Jason Allison for the 2005-2006 season.

The Leafs would then start a stretch of three consecutive seasons where they were fairly terrible all year and then would make a remarkable stretch drive, then just barely miss the playoffs. It was hilarious for those who hate the Leafs, meaning, everyone outside the GTA.

Ferguson made deal after future-destroying deal in a desperate bid to keep his job:

Ferguson was eventually canned in Jan. 2008 and the MLSE made the brilliant move of bringing back the guy pretty-much least equipped to deal with the new NHL in "Trader Cliff" Fletcher.

Note to the Maple Leaf organization: Nostalgia does not win you hockey games.

Fletcher was brought in to basically wait it out until Anaheim Ducks GM Brian Burke could legally be pouched, but made a stamp of his own in his short stint as GM. He made moves to get rid of dead weight in Bryan McCabe, Tucker and Raycroft.

Fletcher also was given to tough task of trying to trade fan favourite Sundin as the Leafs needed to rebuild. But he could not convince the Leafs captain to waive his no-trade clause and thus, lost out of the opportunity of a nice bounty for the veteran Swede. You can only imagine what the Leafs could have gotten, but it's fair to say there would probably be one or two solid prospects in the team's farm system now. Instead Sundin fled to Vancouver the following season and the Leafs got not even a bag of pucks in return.

Fletcher made a few other blunders too, trading for Lee Stempniak, and signing little-used Jeff Finger for a preposterous 3.5 million a year. But he did draft Luke Schenn, so it wasn't all bad. Well, unless you've watched Schenn play this year.

Finally, the Great-Angry-Hope Burke was signed in Nov. 2008, the great Leafs ship appears to not-necessarily be righted, but at least it's floating in the right direction.

Bringing in Phil Kessel, even at the high cost of two first rounders, appears to be the right move. The defence is somewhat respectable, though the goaltending is only as steady as Jonas Gustavsson's heartbeat.

Ten seasons, no Stanley Cup final appearances, only a few players worth watching -- and still the most expensive and hardest NHL ticket to find. Go Leafs.

Stay tuned: Tomorrow has yet another installment in our look at a decade of T.O. sporting woe. The Blue Jays break our hearts, Vince Carter becomes the most hated man in the GTA and we learn that we have a lacrosse team or something to that effect.