A large majority of Canadians believe the delays and other shenanigans occurring at the country’s major airports have become a global embarrassment, according to a new poll, and a similarly large group say they’re avoiding airports altogether.

Ipsos says in a new poll that 70 per cent of Canadians now believe “the situation at Canadian airports is an embarrassment to Canada,” and nearly 60 per cent of respondents are avoiding flying until they see improvements.

The stories of missed connections, lost bags, cancellations, and delays, sometimes prompting people to sleep on floors of airport terminals, have been cropping up for months as travel restrictions loosened earlier in 2022.

News reports of the delays appear to be displacing the actual impact of the occurrences themselves, with Ipsos finding that five per cent of respondents strongly agreed they’ve been personally impacted by delays while travelling through a Canadian airport, but close to 60 per cent say they will avoid entering an airport for the time being as a result.

When asked who was to blame for the situation at airports, 39 per cent of respondents said the airports themselves, the federal government, airlines and Canadians who were out of practice with how to conduct themselves while travelling were each equally to blame.

Narrowing it down to specific issues at airports, a plurality (34 per cent and 44 per cent) placed blame for lost baggage or cancellations with the airlines, while 34 per cent blamed the federal government for slowdowns at customs.

When it came delays at security checkpoints, 33 per cent of respondents blamed airports and 23 per cent blamed the federal government.

When asked how long the problems at airports may last, 55 per cent of respondents said they agreed it was a temporary issue that could be largely solved by September, while 45 per cent said the problems would last beyond summertime. 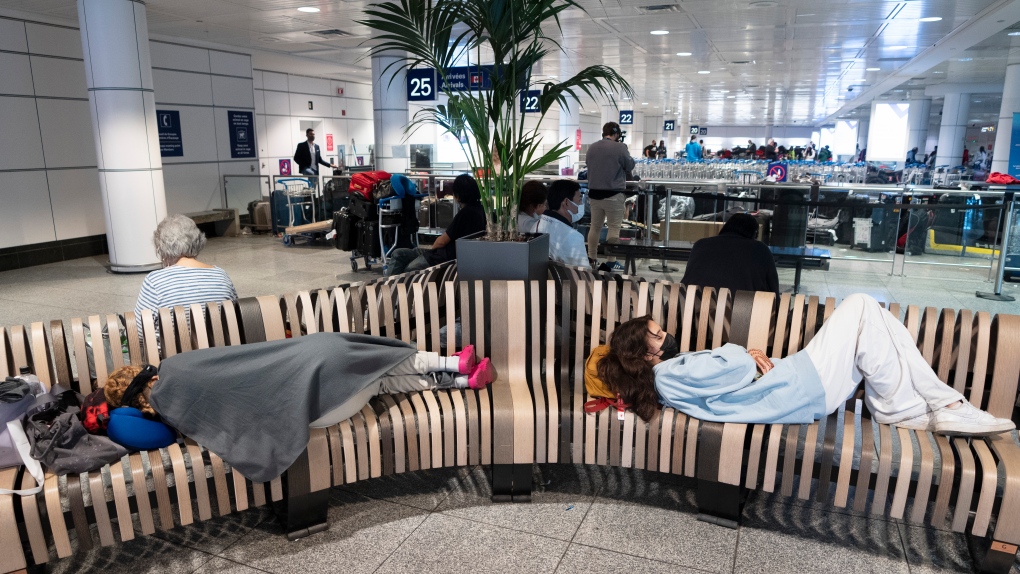 People sleep on a bench as they wait at Pierre Elliott Trudeau airport, in Montreal, Wednesday, June 29, 2022. THE CANADIAN PRESS/Ryan Remiorz

Only 37 per cent of respondents said they thought the federal government was doing enough to address the situation at airports.

The poll also asked a darker question of respondents, probing whether they thought the slowdown at airports was “just the start of a bunch of problems with the delivery of basic public services” in Canada.

It found 17 per cent of respondents strongly agreed with that statement and another 49 per cent agreed somewhat.

The groups that agreed most with that statement were residents of Atlantic Canada (72 per cent) and people who lived in households with incomes of more than $100,000. (71 per cent).

Ipsos conducted the poll between July 12 and 13, using interviews with 1,001 Canadian adults, split to represent the country’s demographics.

It is considered accurate +/- 3.5 percentage points, 19 times out of 20 had all Canadian adults been polled.

China's zero-COVID lockdowns have been linked to a rare wave of protests across the country in recent weeks, and immigration industry experts say the strict pandemic rules are also fuelling a surge in requests to live in Canada.